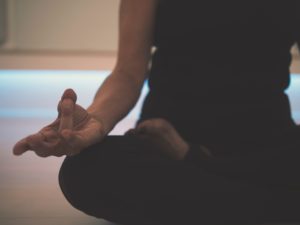 The first time I walked into a Bikram (hot) yoga studio, I was met by a tough-looking man in his late fifties. He had the air of a mechanic, or perhaps a truck driver—the sort of person who innately knew how to fix things. I wasn’t that far off. Steve had been a police officer in San Francisco for many years before he went yogi.

“You’re going to want to leave the room at some point,” he said, pausing only to point a gnarled finger in my face. “But I’m not going to let you. Stay in the damn room, okay?”

I thought it was rhetorical, but he waited for an answer—no, assent. He wasn’t negotiating. I nodded. He got me a mat, a towel, and told me to find a spot in the back of the hot, dark room, already full of people.

Some talked quietly while others contorted their bodies into various torturous positions. I put my mat and towel down in the corner of the room, unsure of what was about to happen. Hoping the shadows of the corner would hide me.

The lights came on and Steve came in hot.

I hadn’t kicked anything’s ass in the past few years. Out of shape, overweight, and recently separated from a career and a calling that I had invested over a decade (and too-many tuition dollars) in had fizzled before my eyes.

I was stuck in the left corner of the country with no extended family closer than twelve hours away, a barren job market, no marketable skills, and two kids who were already looking toward a Christmas morning I wasn’t sure we’d be able to pull off. Even taking the intro to Bikram class was an expense we couldn’t afford but, without sounding too dramatic, it was something I desperately needed.

Being in that room was an expensive deflection, a distraction from the very real problems I would have to eventually face. But for the next ninety minutes, I wouldn’t be able to.

The rigor of a Bikram yoga class can’t be understated. It drains you physically and mentally. It forces a freakish, hyper-focus that I am unable to achieve in almost any other part of my life, which is likely nothing more than a fight or flight instinct being engaged.

To be clear about it: Bikram will kick your ass. And I was, as they say, here for it.

So I stood on the line in the carpet—Steve was big about getting your ass on the line—and I fumbled my way through the entire class, kicking off a fascination with a practice that, to anyone who knew me then or now, didn’t seem like a natural fit. I’ve never been a small guy and flexibility was always more of a philosophical ideal than anything practical in my life. I still can’t say namaste without feeling a little fraudulent.

After the class, I told Steve as much (humor has always been a defense) and he gave me a look usually reserved for rude comments made toward family and unpleasant odors.

“There’s no such thing as perfection in that room,” he said. “All you can do is come back.”

And I did, for close to four years. I went to class daily and found a community and practice that was life-giving in a way that, frankly, few other places had been.

Can you ever recreate a specific moment in time? A specific way that a place—a group of people—save you, even if they aren’t aware of how deeply their actions are fundamentally making you believe in yourself and the world again? To have faith again?

When we leave the strong places in our lives, there will always be trauma that nobody else can understand. There will always be an aching loss that builds and builds deep inside you. Some of this is natural loss. Some of it is unfair comparisons. Whatever it was, when we moved to Minnesota I fell away from my practice for four years.

In that time, I gained weight. And then I really gained weight. I started working out, got in the best shape of my life, and began to get bored with the constant running and lifting weights. A friend suggested I shake it up a bit, which has never really been my style. But that night, as I was lying in bed—unable to sleep and staring at my phone—I thought, “What about Bikram?”

A few days later, I walked into the studio feeling a bit cocky. I was in the best shape of my adult life, down almost 60 pounds. And I had four years of yoga experience in the back of my newly-purchased men’s yoga booty shorts that, incidentally, I also now had the confidence to wear.

Ninety minutes later, I was shredded. It took me fifteen minutes to get up from the final savasana (aptly called “dead body pose”), which could’ve been mistaken as some real intentional yoga shit but was nothing more than survival. I was done.

When I finally stumbled out of the room, the teacher asked me how it went and I lied and told her it was great to be back. However, a few days later, I was back. The class went about the same and left me wondering why I was paying for a regular ass-beating. It never really gets easier, but I’m starting to remember that the difficulty is a part of the joy.

A few weeks after I went back to Bikram, I found out that Steve had died. I was sitting in my car after a class, drinking water and trying to work up the energy to drive home. The news hit me like a surprise punch. I won’t overstate our relationship, as I’m sure that he had a similar effect on countless other people who took his classes, but I did count him as a friend. And more importantly, as a person who stood in my way for the briefest of moments and made me remember that I am more than my current circumstances.

He made me care about myself when I didn’t necessarily want to.

I won’t dedicate this blog post to him, or offer up a vague, “love people while they’re around” platitude. Instead, I’m going back into that hot room, even though I don’t really want to right now. Because I know it’s going to hurt. Because I’m pissed that we lose people. Because I’m deeply sad.

I’m going to stand on that line one more time, trying to kick ass, reminding myself of one more thing he said to me: “If it can be broken, it can be fixed.”