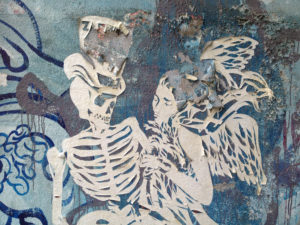 This week we are delighted to welcome Jessica Mesman as Good Letters’ new editor.

“Without an ever-present sense of death life is insipid. You might as well live on the whites of eggs.” ― Muriel Spark, Memento Mori

It’s dark this morning. Sunrise comes later over the cornfield. The maple outside my window is yellowing, shedding. The school-bus lights swing onto our street. Brakes squeal, the doors gasp open to swallow my son and his friends at the bus stop, which is also our front porch. The house shudders briefly, exhales with the departure of the loud chatter of three eight-year-olds boys.

I sit in the dim light of our gas stove with my laptop, check social media, find it full of horrors and portents.

Twitter: a plane has crashed in Indonesia. Facebook: Soldiers deployed to greet those fleeing from pain with yet more pain. I see the faces of the eleven people murdered in their synagogue in Pittsburgh.

I return to sewing the last button on my daughter’s Halloween costume. She’s wearing a pointed gnome’s hat and heavy cloak like Wirt from Over the Garden Wall, a whimsical animated story of children lost in a Dante-esque dark wood. Her brother will be John Wick, noir hero, Fortnite skin.

How silly we are to make this annual game of death each fall. How gauche, how tasteless, the skeletons, the skulls, the white sheets with black eyes hung from the porches, snapping in the wet wind.

Too soon, I think. Playing at death right now seems like an insult.

I’ve always respected willingness to look death in the face, to admit its capricious leavening power. It’s what made me a certain kind of Catholic, the kind who appreciates the Stations of the Cross and a gory German crucifix. I shiver with satisfied recognition at “Let all mortal flesh keep silence/and with fear and trembling stand.” I love the artistic and spiritual traditions of Memento Mori, Danse Macabre, and the vanitas still life. Hell, I love corny horror movies.

As someone who lost my best beloved early in life, I’m scandalized by platitudes about God’s plans and by pink ribbons and survivors’ tales. Once, in the middle of a Race for the Cure event I ran to honor my mother’s memory, I left a pack of women in their sashes celebrating months or years of remission and walked right off the track and all the way home.

This isn’t just perversity. “Remembering death is a dusty practice that needs to be dusted off and used,” said Sr. Theresa Althea Noble, author of Remember Your Death: A Memento Mori Lenten Devotional. (“Without an ever-present sense of death life is insipid,” wrote Catholic novelist Muriel Spark.)

“Focusing on your death may seem morbid, unhealthy, disturbing, and perhaps even diabolical,” Noble writes elsewhere. “And in some cases it can become so. Death in itself is an evil.” But when Noble started keeping a skull on her desk a while ago, she found it transformed her spiritual life. I followed her tweets marking her days with her skull with fascination.

If God did not make death, as we read in the first chapter of the Book of Wisdom, if death is the child of sin and evil, if it is contrary to our nature and our destiny, then what spiritual benefit can possibly come from such a practice?

Especially now, when death seems to be winning the day?

Noble says that the skull on her desk reminds her that she will die, and “that my Savior has transformed death into a doorway to new life.” Death, never intended, never celebrated, has lost its sting,/ as Saint Paul wrote.

But I’m not quite there, Sister. Death’s sting is still deep in my flesh.

Catholics pray to Saint Joseph for “a good death.” Some of us contemplate our mortality with skulls on our desks (I’ve got one of those now too). Artists paint fading flowers and rotting fruit. But “there’s one thing that’s real clear to me,” sings Jason Isbell in “Elephant.” “No one dies with dignity.” We go kicking and screaming. Even Jesus, in his agony, cried out for his father.

The poet Anya Silver died late this summer. Her husband posted a picture of her on Facebook, bursting from the ocean waves like Venus in a vintage bikini. She was laughing, her expression that of a woman who loves and knows she is loved in return. I have returned to her picture again. Memento Mori. Here is someone who, while she lived, did not live “on the whites of eggs,” as Spark wrote.

…you will die anyway.

I chalk those words of another poet, Padraig O’Tuama, onto a wall in our kitchen, where my children will carve pumpkins and roast their innards before propping them on our porch. Later we’ll join a danse macabre that doesn’t end in sorrow at the grave but in my living room with bags of candy and classic Disney shorts of skeletons playing their bones like xylophones.

Remember you will die, the swinging skeletons say, and I am newly astonished by the bravery of every one that lives.

Jessica Mesman is a widely published writer whose book Love and Salt: A Spiritual Friendship in Letters, co-authored with Amy Andrews, won the Christopher Award for “literature that affirms the highest values of the human spirit.” She founded and curates the award-winning group blog, Sick Pilgrim.