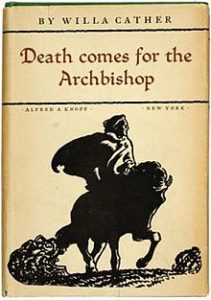 A French priest drifts through an American hellscape of identical rocks. Father Latour needs water if he is going to survive. But the priest, “sensitive to the shape of things,” seems more oppressed by the featureless desert’s lack of form than its lack of water. He needs a landmark almost as much as he needs a drink. The only shape Latour sees around him is a trapezoid shared by boulder, butte, and mesa. But this shape holds no significance for him, its very meaninglessness tinged with subtle threat. Suddenly, out of this “wasteland” looms the most profound shape the Roman Catholic priest knows—a cross:

“When he opened his eyes again, his glance immediately fell upon one juniper which differed in shape from the others. It was not a thick-growing cone, but a naked, twisted trunk, perhaps ten feet high, and at the top it parted into two lateral, flat-lying branches, with a little crest of green in the centre, just above the cleavage. Living vegetation could not present more faithfully the form of the Cross.”

Latour prays under the tree and finds water, satisfying his spiritual and physiological thirsts.

This scene opens the main text of Willa Cather’s 1927 novel Death Comes for the Archbishop, giving readers to understand Latour’s life story as a quest for sacred form. Latour’s mind, steeped in European Catholic traditions of reasoning and aesthetics, must reckon with an alien New World landscape populated by Native Americans, Mexicans, and Anglo settlers, some of whom are Christians, some not. In many ways, the continental West, newly annexed by the United States after the Mexican-American war, is post-Christian: though it was once evangelized by Spanish missionaries—an ambivalent enterprise at best—corruption and shrunken influence now plague its Catholic churches. Some of the remaining Native population are hostile; others, like the Navajo, vigorously maintain their separation from Euro-American influence. Meanwhile, waves of Anglo pioneers flood the West, drawn by decidedly secular tides such as the Pike’s Peak Gold Rush.

Cather saw in the arid and religiously convoluted American West of the mid-nineteenth century a precursor to the crisis of European and American culture after World War I. But where other chroniclers of postwar disillusionment, such as T. S. Eliot and Ezra Pound, were struck by the unexampled quality of their spiritual predicament, Cather thought the past could serve as a guide to her present. This is because for Cather, we have always been modern.

Many tales of modernity tell us that once upon a time—before the Great War, or before the US Civil War, or before the Industrial Revolution, or before the Renaissance—we were rooted but now we are rootless. For Cather, however, human beings are inveterate wanderers. We have always been itinerants, pilgrims progressing or just pressing on: Homo Viator, “the human being on the way,” as the twentieth-century French Christian existentialist Gabriel Marcel wrote in his 1951 book by that title. Marcel took his Latin vocabulary from the thirteenth century’s St. Thomas Aquinas, who riffed on the late-antique St. Augustine, who likewise paraphrased the New Testament writers, who repackaged for an audience beginning to understand itself as “Christian” the stories of the Jewish Babylonian exile, which itself recapitulated Israel’s Exodus and wilderness wanderings, tropes anticipated in the Scriptures when YHWH calls Abraham into the desert of Canaan in the early chapters of the book of Genesis—the book of beginnings. The search for roots may only disclose a primeval rootlessness.

If this is true, then we are all, spiritually, in the desperate position of Father Latour at the beginning of Cather’s novel, wandering through a formless desert with some hope of a destination but no clear path to get there. And we need signposts like Latour’s cruciform tree—forms peculiar yet recognizably sacred—to guide us through.

Latour devotes his life to building such a signpost for his fellow-wanderers. Primarily, this is through his vocation as a priest and, eventually, an archbishop. But he also leaves behind a durable monument, one that will outlast his body: the Cathedral Basilica of St. Francis of Assisi at Santa Fe. His building weds the aesthetics of European Christendom to the landscape of the American West. Latour builds in the Romanesque style, an homage to his home region of France. Yet the church is composed in yellow New Mexican sandstone, hewn from a hill much like those trapezoidal buttes that menaced him at the beginning of the novel.

Death Comes for the Archbishop testifies to the power of architecture to orient us on our human journey. Buildings aren’t just physical landmarks; they’re spiritual ones as well. Looking around at most American churches, however, you wouldn’t know this. Despite a rash of fine church-building from the late-nineteenth to the mid-twentieth centuries, forms derived from the corporate and entertainment sectors predominate: big-box stores with steeples, great bland shopping malls and stadia of the soul. The situation has not much improved from Father Latour’s time: “It would be a shame to make another ugly church on this continent where there are already so many.” And this ugliness is spiritually significant, because religious architecture can offer waymarks to those wandering the trackless desert of American commerce.

The hard-headed Puritan streak in American culture may resist discussing beauty in worship or in buildings. But as long as houses of worship are being built, demolished, or remodeled, we should talk about how they look, and about what that means. In his long poem “The Cathedral,” about the great Gothic edifice Notre Dame de Chartres, the nineteenth-century American poet and son of the Puritans James Russell Lowell proclaimed: “This is no age to get cathedrals built.” It was 1870, just a few years after the Civil War, and other matters—like Reconstruction—felt more exigent.

Jonathan McGregor's creative work has appeared or is forthcoming in publications including Commonweal, Image Journal, Ruminate Magazine, Leaping Clear, and The Spectacle. He teaches writing and literature at the US Air Force Academy, where he is a poetry editor for War, Literature & the Arts. Follow him on Twitter @j_d_mcgregor.