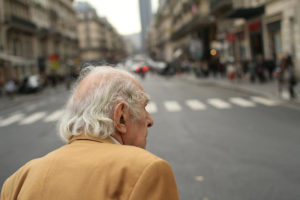 Like an increasing number of congregations in the U.S., the urban church I attend shares its space between two local faith groups. Our building hosts both Mennonite and Jewish services and education classes. My pastor’s weekly email sometimes weaves in stories from our female rabbi space-mate or the Torah.

We mourned with this community after Pittsburgh this year—all while knowing our acquaintanceships and our showing up at a vigil wasn’t going to stop acts of domestic terrorism or anti-Semitism. And yet, we still showed up. Now the question becomes: How will Christians continue to show up for anyone threatened by hate, sometimes in the name of a Jesus we don’t recognize?

Valerie Wohfeld’s poem “World” starts with a quote from author, educator, and rabbi Joseph Telushkin, speaking of the tzaddikim, at least 36 righteous people “who do their good deeds quietly” without even their neighbors knowing it’s them. Without this group, “the world itself perishes.”

Some of my neighbors recently moved away—yet another family I never invited into my home. My thirsty, repenting, and reaching spirit drank Wohfeld’s poem like water. From its very first line and its use of the feminine tzaddekes, it lets the reader know our collection of tzaddikim is probably unexpected from what religious leaders and others in positions of power imagine.

The poem is literally dancing with its rhythms and music. It repeats the phrase “All the world depends on” as its main springboard, leading the reader through descriptive list imaging who—and sometimes what—our world’s 36 might be: a potter, a pet owner, a pianist, an unmarried teacher, a five-year-old boy…

Drink this poem with me. Repent and mourn and hope. And then invite your neighbors over for dinner.

An old Jewish tradition, dating back to the Talmud, records that the world is sustained by the presence of at least thirty-six tzaddikim. These people do their good deeds quietly: their neighbors do not know who they are. If, however, that minimum of truly saintly people does not exist, then the world itself will perish.

Note: A tzaddekes is a female tzaddik.