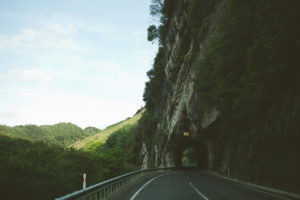 There’s a highway that goes the strange way through New York State. It sends you out west and eventually into Pennsylvania, but not before a kind of slingshot move that starts up around Schenectady and then skitters down into the southern central part of the state.

This is Interstate 88, a roughly 117 mile stretch of road that takes up much of the space once occupied by NY 7, a smaller road that one can get a peek at by leaving I-88 now and again and driving along what is left of NY 7. Driving along NY 7 allows you to go through some of the towns along the route, places like Oneonta, Otego, Unadilla.

The oldest sections of NY 7 can be traced back to the first settlements in the area around Albany in the late 17th century. These were country roads that connected tiny populations on both sides of the Hudson river. There was, for instance, Hoosick, now incorporated as the village of Hoosick Falls.

Hoosick Falls is, incidentally, the place where Grandma Moses lived and painted toward the end of her life, and where she died in 1961.

Interstate 88 is, then, what is left of a rural and ‘folksy’ America that still exists outside the orbit of the great metropoli and the massive highways, like Interstate 95, that connect sprawling cities and suburbs along the east coast corridor that runs from Boston all the way down through Washington DC.

The idea that there is a great contrast between rural and urban America is true, of course, and also not true. One of the things an attentive eye will notice in the pictures of Grandma Moses is that for all the quaintness, for all the folksy Americana of the pictures, there are quite a lot of stage coaches and locomotives and the hustle and bustle of people coming and going.

And the drive along I-88 and the remnants of NY 7 confirms the tension in the pictures of Grandma Moses. The village of Unadilla, for instance, projects something sleepy and old-fashioned today. But there was obviously a great deal of wealth and commerce that built the village of Unadilla. Along its central street are structures of brick and stone constructed with sophisticated craftsmanship and the most advanced technologies of the day.

Unadilla was a hub along what was once the Albany and Susquehanna Railroad line, which transported coal from the mines of Pennsylvania to the homes and businesses of New England. This is to say that the towns and small cities along I-88 are not exactly the remnants of a rural and pre-industrial America. They are the ruins of a 19th and early 20th century industrial and commercial network that has since been more or less abandoned for better routes and networks.

When you see these areas as ruins of the very same civilization that hustles and bustles and flourishes along roadways and rail lines and airport hubs just a few hundred miles away in either direction, you get a sense of the strange ontological status of such places. They exist in a kind of suspended animation. They have an ambiguous status because they are not really places of the past or of old traditions. Villages like Unadilla and Otego sprang up just as suddenly and unexpectedly as the economic forces that birthed them. They flourished for a very brief period of time, historically speaking, and then faded into obscurity again as the routes of commerce shifted and kept shifting and, indeed, keep shifting to this very day.

To what, then, exactly, do the towns along I-88 testify?

If not to the past, then to the future? But what do we mean by the future? Is this civilization today, in the early 21st century, possessed of any concept of the future at all?

Perhaps then, it is actually the present that exists in the villages and cities and towns along I-88. Not the present as it can be encountered in the whir of transport and commerce along I-95, but the shadow of that present, the ghost-image of the restless movement to be found elsewhere.

I have always felt that there is a hovering quality to towns like Unadilla and Otego. I do not sense contentment there, not as the primary mood. I sense quiet restlessness and ennui, a giant weariness that settles in when the otherwise ceaseless motion ceases.

I watched, for a brief few seconds as the car rolled through, a man smoke a few puffs of a cigarette outside a doorway of an old building in the village of Unadilla. His eyes met mine. He neither smiled nor frowned. He met my gaze with languor. The languor of his gaze had force to it. I could feel it slam into me. And it felt somehow, his languorous gaze, like a rebuke.

For a moment he seemed to me like a prophet of old, but one who has no need even of words. And I wondered to myself, what does he know. What does the prophet of Unadilla know? Is it something for him alone, a private prophecy of the wearried and forgotten places? Or is it something that we must know too?