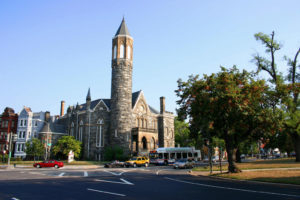 “Churches are the mansions of the poor,” the novelist Oscar Hijuelos stated in his 1995 paean to New York ethnic Catholicism, Mr. Ives’ Christmas.

Lately, though, it seems that in many cities, the churches are now simply becoming mansions.

In Washington, D.C., where I live, the gray stone church, with its sober round tower, has sat for more than a century on the east side of Stanton Park, right on Capitol Hill.

It’s barely two blocks from the Capitol, but for the much of the two decades I’ve lived in the city, the corner on which the church sits —6th Street and Maryland Avenue, N.E.—was the informal demarcation point beyond which the neighborhood became a step wilder. Up until just a couple of years ago, and maybe not even now, you wouldn’t want to walk there alone at night.

When I first moved to the city, in 1998, the church was the home of a group established by an African-American priest who’d left official Rome to found what he called the “Imani Temple, a Church of the African –American Catholic Congregation.”

The lighted, shadowbox sign out front bore that very name, emblazoned alongside an Ethiopian cross sketched out in the Black Freedom colors of red, green, and black.

The Imani Temple sign is gone now, of course, along with the Imani Temple itself, which decamped a few years ago across the District line to a new location in Prince George’s County, Maryland. Imani’s institutional roots may have been more nontraditional and contingent than most, but they were following in the footsteps of a number of other D.C. black congregations, like the patrician giants Metropolitan Baptist and Reid Memorial AME, that left for the suburbs.

What had been the Imani Temple, I learned recently, had sometime before that been D.C.’s Eastern Presbyterian Church, and which, by virtue of that high round tower, been called the “Lighthouse on the Hill.”

That moniker seems all the more ironic given that I learned about it not from an article in The Washington Post, or a historical monograph, but from the real estate prospectus for “The Bell Tower at Stanton Park” the landmark “six-condominium community” that has arisen within the Imani Temple’s former walls. With each unit priced north of two million dollars, the six “residences” are rarified indeed, and the press release is at pains to note how the “historic” stained-glass windows have been “carefully restored”—even the ones on which the Greek letters Alpha and Omega are prominently, and ominously, emblazoned. (Am I the only one who gets this joke?) The photo spreads for each residence feature vast, blank white Italian kitchens, and in one, a platform bed sprawls out underneath a stained glass Celtic knot.

Now, the story of depopulated churches transitioning to other uses is nothing new: the seminal 80s New York City nightclub Limelight was in a former church, after all. But something about the sheer vulgarity, and the purely individualistic luxury of The Bell Tower at Stanton Park, along with some other churches-turned-condos, has occasioned some journalistic hand-wringing I don’t recall having seen before. Religion writer Jonathan Merritt worried about the uncertain fate of lost churches in Brooklyn, and other cities, in his article “What Should America do with its Empty Churches?” in The Atlantic, and wondered about the civic effects of a city losing its sacred spaces.

The Washington Post, meanwhile, cited The Bell Tower at Stanton Park as part of a larger anxious article, “The $2.5 million condo has arrived in Washington, D.C., and it has a fabulous view of a Chik-Fil-A”. Adding to the sense of angst is the notion that these church departures signify not just transfers of real estate, but concrete evidence of an increasingly post-Christian culture.

Yet in exactly none of these articles is there any discussion about the fact that there just might be churches that could use the buildings that have been vacated. The narrative that ends with the pronouncement of “an increasingly secular America” begins with a priori assumptions about the value of real estate—the real religion under the surface.

Within just a few miles of Bell Tower at Stanton Park, though, there’s the Unity Baptist Church, Christian Love Baptist Church, Mount Horeb Baptist Church, Hope Church of God, and the Debre Mehet Saint Michael Ethiopian Orthodox Tewahedo. And that’s just what I could piece together along one major thoroughfare. Some of these churches have built modest buildings as elegantly as they can manage, while others are squirreled away in dwellings as diverse as humanity—stealing back the store fronts and strip malls of capitalist culture: The Mountain of Fire and Miracles fellowship occupies the ground floor of a still-functioning auto repair shop, and in my neighborhood, the Igbo Anglican church was housed for years in a warehouse in the middle of an industrial park.

The Igbo Church then took over an abandoned medical building, and over the course of the decade, painstakingly blew out the walls to add a line of Gothic arched windows. For a while, the construction was halted under a Stop Work order, and somehow the chandeliers that had been added inside burned yellow, all day and all night, a beacon on the wooded hill overlooking my exit from the highway. I can think of no more potent metaphor for a God that persists.

In Katie Kresser’s forthcoming essay in Image 99, “Christ the Chimera: The Riddle of the Monster Jesus,” she cites Jesus as being “the most adaptive being of all.” Following His example, the houses of worship are infinitely resourceful, entrepreneurial—tunneling through the commercial city like termites, to reclaim what nourishes.

They are not worried about leaving The Bell Tower at Stanton Park behind, where it stands, lightless on the corner, empty.