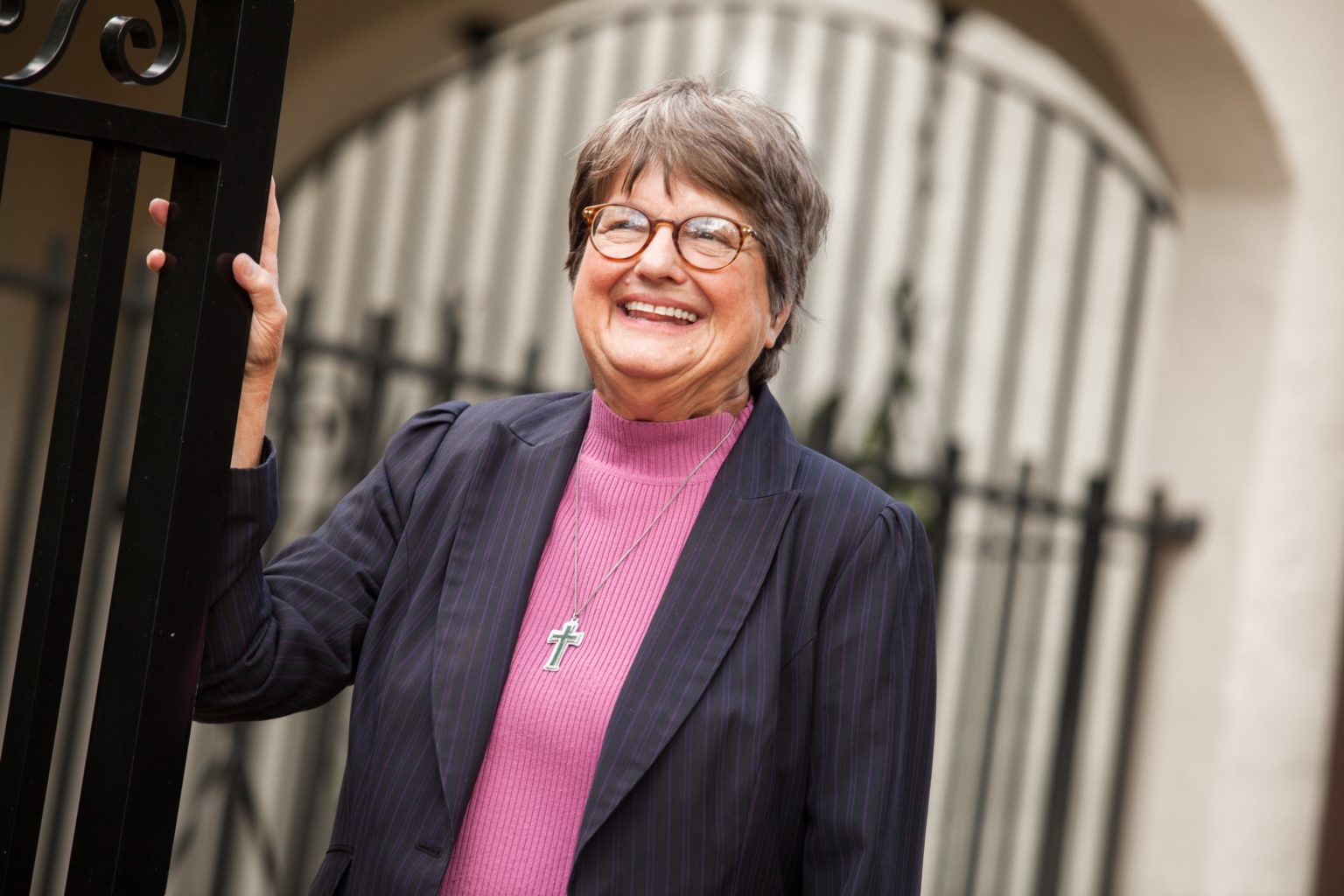 When my mother was still alive, one of the stories she used to tell was about the role of Catholics in the desegregation of my Mississippi Delta hometown during the 1960s. One white priest, a “Father Love,” she said, had come to town to be in residence at St. Francis, the “black Catholic church,” and he had “taught the first five families” in his congregation to bring a suit demanding desegregation of Yazoo City’s public schools.

I kept thinking about that story the whole time I was reading River of Fire, the recently published memoir by Sister Helen Prejean. Prejean, the New Orleans-based Sister of St. Joseph is chiefly known for her longtime advocacy against the death penalty, and as the author Dead Man Walking, her memoir of “accompaniment” of death row inmate Patrick Sonnier and a testament against the injustices of the practice. That book became the basis of the 1995 film starring Susan Sarandon.

River of Fire has been framed as the “prequel” to Dead Man Walking, and to be a more general spiritual memoir about how Prejean’s Catholicism evolved in line with the Church’s own changes, and brought her to her mission of activism. It begins with a lush narration of Prejean’s childhood in a family of deeply loving, learned, and fervently Catholic parents; her discernment of a vocation and entry into the Sisters of St. Joseph—at a time when the nuns were still habited and their rules far more stringent than they are today. Then finally, the book relates Sister Helen’s quest to continue fulfilling her vocation even as her understanding of it evolved.

When the book was published earlier this fall, both mainstream (The Los Angeles Times) and niche (National Catholic Reporter) media published reviews, and Sister Helen, as she’s become known, did a round of interviews on shows like Fresh Air and Democracy Now, along with a national book tour. But like too many books these days, after the initial flurry of attention, River of Fire seemed to drop quickly from the national imagination.

I wondered why that might be the case. It occurred to me that the very reasons River of Fire was guaranteed initial media attention might have something to do with how come the book wasn’t being taken as seriously as it should have been.

The first has to do with Prejean’s success in winning converts to her cause. The United States may still be the prison industrial complex of the world, and the death penalty not yet abolished, but more people than ever before—including in some unexpected corridors—understand the cruelties, costs, and racial disparities of capital punishment. Even ostensible advocates of the practice avoid loudly defending it—at least on the editorial pages. With that hearts and minds mission achieved, the public imagination may have moved on.

The second reason, I’d aver, lies in the lack of basic understanding of Christianity in general, and Catholicism in particular, and which are necessary to appreciate Prejean’s vision of a renewed vitality for a “progressive” Catholic church. Hence, the tendency of critics like Terry Gross to focus instead on the external, rather twee, details (that starched linen guimpure; the warnings about the dangers of “particular affections”!) of becoming a teenage nun in pre-conciliar times.

Not that those details aren’t, in themselves, enchanting—as is Prejean herself, endlessly. Our editor Jessica Mesman and I were both moved to tears by hearing Prejean’s voice, that soft Louisiana accent we both knew, bubbling softly through the radio in response to Gross’s questions.

That same voice, both gentle and energetic, bounds through the book’s pages. In an era of confessional memoir, she is unashamed about confessing a happy family life in her childhood and a great respect for her parents. Just one passage—I could quote dozens—rendered completely without irony, sums up that spirit:

“Every morning and evening Mary Ann [her sister] and I would kneel at Mama’s knee to say our prayers to the Blessed Mother and Jesus to help us be good children. We’d repeat the words of the prayers after Mama, and one day a significant request was added: ‘And please, dear Jesus, send us a little brother.’ Five years later, along come Louie.”

It’s that voice that just keeps going, on and on, rolling on throughout the pages, sweeping us along with it.

The very geniality of that voice, though, may have had the effect of soft-pedaling what’s a forthrightly progressive book. Aside from her death penalty work, Sister Helen is probably the most famous post-conciliar, non-habited nun in American public life—far more than, say, any member of the Leadership Conference of Women Religious, or the “Nuns on the Bus.”

Sister Helen is unapologetic about her commitment to the Church reform in the years since the Second Vatican Council—and her belief that the work remains unfinished. That includes exactly the issues you would expect—more community-centered liturgy, more women’s leadership, a more ecumenical and flexible ecclesiology.

Those are somewhat counterintuitive priorities to me. Just to lay may own biases bare, I’m a convert to Eastern Orthodoxy who lives more or less on the traditional end of things (church-wise). I’m one of those converts who tends to swoon over the notion of any kind of asceticism, and any recommendation to just “offer it up” when anything is painful. In short, I’m somebody whose impulse is that Harder is always Better.

But in every section of the book, I found Sister Helen’s witness refreshing. Each step in her pilgrimage seems to lead forward into the next—the high school teacher; the seminary student examining theology, right as the Council reforms were hitting U.S. Catholics like a bomb going off; the nascent efforts to allow nuns and priests to develop partnered, yet still celibate relationships (What?). Then finally, her awareness that truly incarnating Justice means really, truly accompanying the poor—which is when she went to live at the St. Thomas housing projects in New Orleans.

Throughout, there’s once again that voice—incredibly vulnerable, and wrestling with problems openly. Here, she speaks movingly of the death of the nun, Sister Christopher, who had become her best friend once “particular friendships” were no longer as frowned on as before:

In faith I hope that Chris wasn’t zapped into nothingness, but I have to be honest; I can’t reason my way into knowing where she is or how she is. All I can do is trust that the God who called her into existence has received her in death and she’s okay. One thing I do know: I keep talking to her and listening for her, and sometimes I ask her help—in the same way, I guess, that I pray to God and the saints. I can’t stop talking to her.

Some scrupulous Catholics might scoff at what they see as the theological flimsiness of this language, but wouldn’t any fool who believes in Jesus, and in the communion of the saints, feel and act the exact same way? I know I would, and do.

What’s less obvious is that—for all her placement within the pantheon of the Catholic Left—Sister Helen appears to hold to her own fairly traditional commitments. She speaks cheerily, for example, about her own chastity—even as she speaks of the necessity of authentic friendship as an accompaniment to it. She may be offering a progressive Gospel, but it’s pretty firmly Trinitarian in its emphasis.

As a fellow Southerner, I found her awakening on the subject of race, and her commitment to the Church’s integration, most powerful. (In another iteration of a familiar, sad story, she fights for the integration of the New Orleans Sisters of St. Joseph high school where she teaches—only for it to eventually close as a result of the flight of white parents from the neighborhood.) And, in contrast to contemporary pessimists on the Left about the possibility of racial healing in the United States, she turns her same spirited, can-do attitude about what the Church can do to solve racism, the carceral state, and above all, the injustice of capital punishment for both offenders and victims.

At the same time, the innate traditionalist in me cannot help but wonder whether all that rigor of Sister Helen’s novitiate training actually prepared her to demonstrate a faith that might seem more relaxed, but in truth had its own unimaginable rigors—i.e., asking the mother of a victim to forgive her child’s murderer.

Could it be, I wonder, that the spiritual rules can only be broken by someone who has already lived them, the way that it was only when, say, Picasso had mastered the techniques of classical drawing that he could effectively jettison them to invent Cubism?

“The glory of God is a human being fully alive,” Sister Helen quotes St. Irenaus as a headnote to one of the book’s chapters. I’ve always seen that quotation translated as “a man fully alive,” and I have not once felt as though St. Ireneus was neglecting the charism of women.

But I’m glad that Sister Helen has translated it this way, here, and am glad to be included in her project. I am honored by the gesture, and grateful.