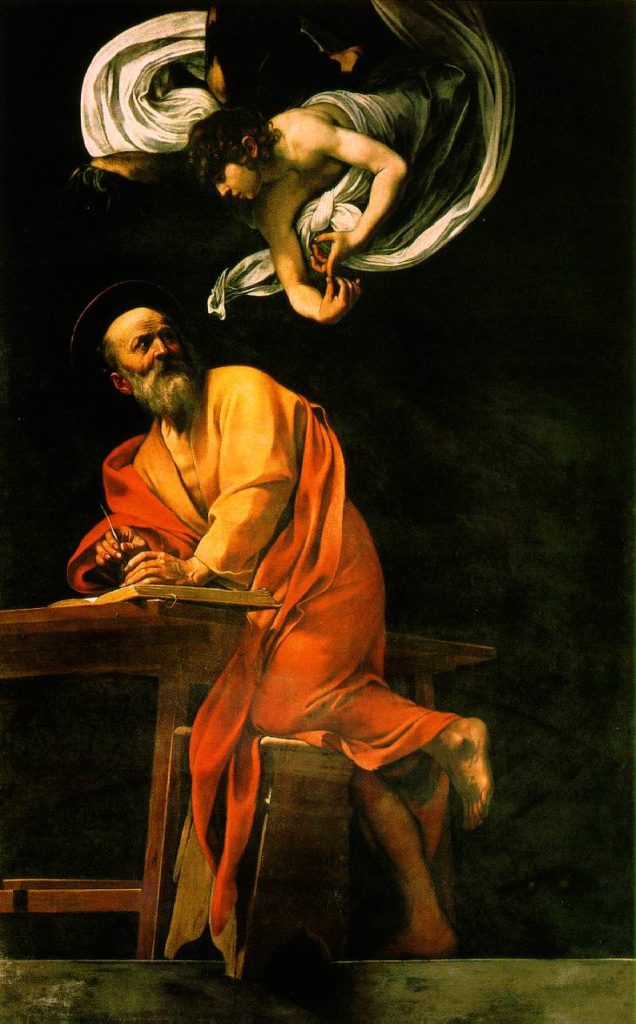 The Inspiration of Saint Matthew

What does it mean to be labeled a “religious poet” in the twenty-first century? The term’s undoubtedly fraught, but “fraught” is perhaps the best word to describe the current relationship between religion and pretty much everything. Small wonder, though, if one accepts the argument of scholars such as Wilfred Cantwell Smith, Talal Asad, and Brent Nongbri that “religion,” as a cultural sphere distinct from politics, economics, the arts, and the various sciences, is a relatively recent invention of Western European modernity. (For those interested in how emerging nation-states like England, France, and what we now call Spain used this novel category to “migrate the holy” from God to king and country, see John Bossy, Anthony Marx, and William Cavanaugh) The consequences of transforming “religion” from shared public practices informing the entirety of human experience into a private realm of individual conviction make older and other ways of understanding the world unintelligible to us–poor, banished children of Hobbes and Locke. As theologian Nicholas Lash writes, “…the relation of human beings to the Holy One, once understood as creaturely dependence relearned as friendship, is now reduced to knowledge of an object known as ‘God.’ All objects of enquiry are shaped by the methods used for their investigation. The invention of ‘religion’ carried with it the reduction of faith’s attentive presence to the entertaining of particular beliefs.”

Lash shares many such insights on “The Beginning and the End of ‘Religion,’” but rest assured he’s mapping the contemporary cultural territory, not plotting a return to theocracy. The path from early modern Christendom to a millennial emporium of customized meaning systems was long, complicated, and irreversible. Whatever has been lost, there’s much to celebrate here. Church claims to temporal power inevitably betray the Gospel in the name of political expediency. Indeed, a possible upside to the ongoing, self-inflicted humiliations of institutional Christianity is that whatever remains of the Church may finally stop conforming itself to the power politics of the day and fully embrace the costly alternative of living as the Body of Christ, where there is neither Jew nor Greek, citizen nor “illegal,” Republican nor Democrat. Whether such an embrace is possible in the United States, where to the extent Christians who are public about their faith readily self-identify as conservative/traditionalist or liberal/progressive, remains to be seen.

Yet Lash’s map proves helpful in negotiating the vast borderlands where religion, spirituality, faith, art, and mystery overlap. And here, at last, we return to poetry. Lash’s distinction between attentive presence and particular belief helps explain why many writers, musicians, and visual artists often resist being labeled “religious,” a designation that typically serves to qualify, marginalize, or dismiss creative work. Note that major poets as wildly diverse in style and conviction as WH Auden, John Berryman, and Seamus Heaney engage religious themes, yet somehow escape the critical kiss off that is the “r” word. When faced with a formidable talent who writes from a life of deeply-held faith such as Flannery O’Connor or Graham Greene–both writers of fiction, I know, but they fit the pattern–the Academy’s default response is to treat the religious content as a personal quirk: interesting to those who like that sort of thing, an oddity that needn’t interfere with our appreciation of their work. Religious faith gets tarred as ideology, perhaps not as odious as Ezra Pound’s fascism, but equally inexplicable.

But what should it matter how and why the pundits pigeonhole someone? Just as the first duty of a religious author is to write a good story, the first and overriding duty of the religious poet is the write a good poem, words so well chosen and arranged as to make the attendant experience available to the reader. Verse that contains a message independent of its precise wording in the same way an envelope contains a letter is propaganda, not poetry. That’s true whatever the apparent subject, which explains why poems about “religion,” politics, or sex are so often atrocious. If the literary world is, perhaps, more open to poetry with religious content than it was in the late twentieth century, that’s due in part to the high standards of journals and institutions like Image that refuse to sell their birthright for a pot of message. Choosing quality over catechesis, they prove that poetry and the human sensibilities we’re taught to call religious needn’t be strangers. They make space for poets to explore faith and doubt, not as opposing polarities, but as symbiotic partners. With such poets as guides, we learn again to tread this fraught terrain as we would any other part of life so near the essence of our humanity.

If that’s what it means to be a religious poet, this has been a good year at Paraclete Press, whose 2019 releases include Scott Cairns’s Anaphora. It’s hard to know where to begin in describing this rich, evocative volume. I routinely dog-ear the page of poems I know I’ll return to, but that’s little use when nearly the entire book ends up so marked. All the attributes that keep bringing readers back to his work are here: disarming humor softening us up for devastating insights; heightened diction rendered in a relaxed, conversational manner so that every word tells; allusions and textual opacities provoking fruitful speculation; weighty theological matters made not only accessible, but urgent. For Cairns, the body serves as locus of poetic experience and our participation in the Divine. Humans, having “invented death” and “made of these our bodies sepulchers,” wander in a world of the dying until the One who “acquiesced to be interred in us” shapes “of every sepulcher a womb.” As material creatures in a world not yet disenchanted, we shed our self-imposed loneliness, learning that “To behold the sublime, one must first/accede that one is also held, beheld,/beholden to. One must first agree.” Rooted in the body, the mind’s insatiable appetites discover a peace “surpassing knowledge, that deep peace/one finds most often in the brief descent/that drops the pilgrim to his knees.” These are poems to be pondered as the words take root in the heart.

Jeanne Murray Walker’s 2019 collection, Pilgrim: You Find the Path by Walking ,leads the reader on a journey of sonnets, a form, Walker explains, she took up to resist the “flatness of much contemporary American poetry, my own included.” As the collection’s title suggests, Walker finds her way in the doing of the thing, testing out and playing within the sonnet’s formal demands rather than forcing her words into a rigid template. Recurring themes include aging and approaching mortality, attending to moments of sudden beauty, and finding meaning–even transcendence – beyond the reach of words. She contrasts death’s “glib monotony” to her mother “doing what she has never/done before: inventing her departure.” She revels in the sounds of an orchestra prior to the ritual in which the players tune up, “before they know they’re being watched or heard.” Fearing “there may be no such thing/as silence,” she clings to the hope that “wanting stillness still might make it so.” It’s in that longed-for stillness that she discovers the voice of God: “You tell me I am silent./In what tongue shall I speak? What words/would be clear?” In poetic bursts of fourteen lines each, Walker conducts raids on the unspeakable.

Stillness and silence abound in Kathleen O’Toole’s This Far, where time is reckoned by the rhythms of nature and the liturgical hours of Benedictine monastic life. As is so often the case with contemplatives, her love of stillness calls her – and us – back to things of this world in their brokenness and beauty. In addition to writing and teaching poetry, O’Toole works for faith-based change as a community organizer. Any line between sacred and profane in these poems is porous indeed. While viewing finely-made reliquaries for saint’s bones, O’Toole recalls her father’s first communion photo “tied with a blue silk ribbon,” and “the swab we would dip in consecrated wine/to give my father Holy Communion/when he could no longer swallow.” Pondering the biblical witness of Thomas and Mary Magdalene, she admonishes us to “question, if you doubt, but bloody your hands/in the world’s wounds for Christ’s sake, do what it takes to find your way.” In keeping vigil for the dying, “we mark time moving mattresses, install/a sick bed, find one weight we can carry.” Wherever O’Toole goes, she walks holy ground.

This year, Paraclete holds no monopoly on what I’m calling religious poetry, thanks in part to the reinvigorated Slant imprint at Wipf and Stock Publishers. From them comes Jeanine Hathaway’s Long after Lauds, a handsomely designed book that’s a delight to hold in one’s hands. Once again, my habit of dog earing the “good parts” goes for naught; there are too many calling me back for another visit. A contemplative discipline is evident in Hathaway’s words: attentive presence; psalm-like exactness; gentle, self-deprecating wit; an unpretentious hospitality. Like Cairns, Hathaway closely attends the moods and motions of the body. A middle-aged monk pulls at a bell rope, “sandaled feet on the ground,/steady in the body’s atmosphere/of ease and pleasure and of pain’s interruptions.” A surgical scar resembles a sunset, “the slash of color/drawing down the night to meet the light’s/last ray.” In a moment of sorrow and loss, she goes to a grocery where a compassionate stranger regards “my blank unbalanced face that brooks/no entry. Yet she enters, rests her ringed hand/light but firm on my arm.” As with familiar prayers, Hathaway’s images and phrases make themselves at home in us, lingering long after reading.

Dorothy Day, co-founder of the Catholic Worker, protested when admirers called her a saint, quipping, “I won’t be dismissed so easily.” I suspect the four poets reviewed here would say the same when referred to as religious poets, just as Margret Atwood, having written The Handaid’s Tale and Oryx and Crake, would chafe at being tagged as a science fiction writer. Cairns, Walker, O’Toole, and Hathaway are poets, period–poets unwilling to quarantine the sacred from their lives or their work. I’m grateful for their witness and for those who make their words available to us.