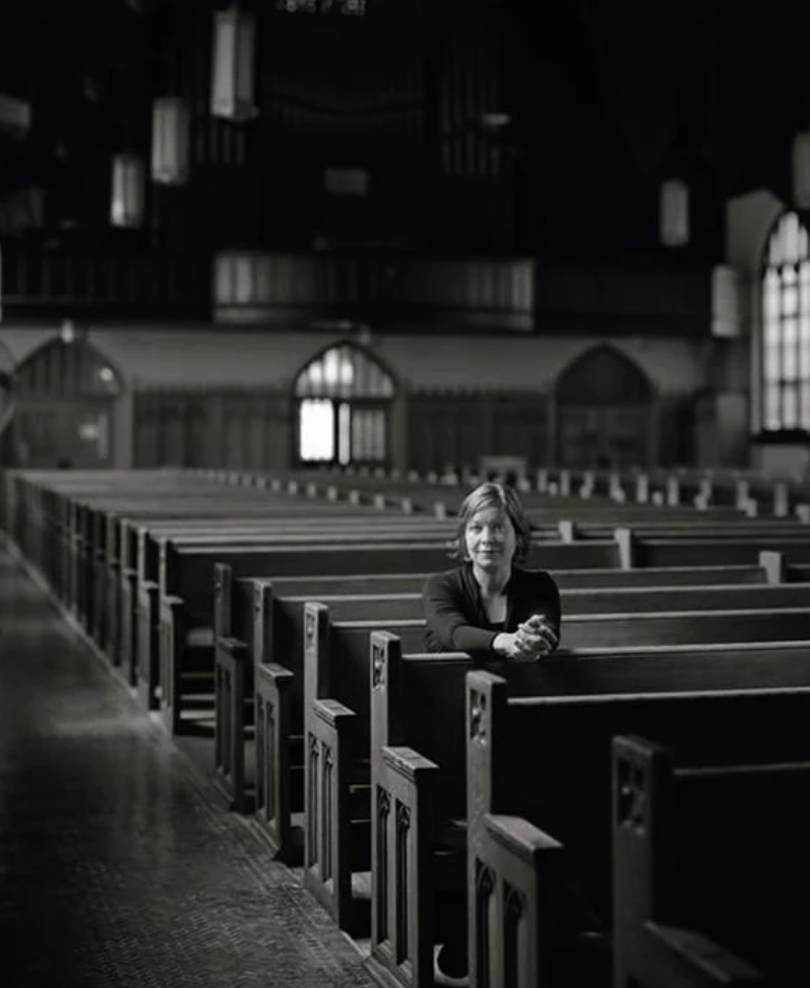 Memoirs about discovering faith often include a sharp turning point, with clear before and after periods. In Sonja Livingston’s latest essay collection, The Virgin of Prince Street: Expeditions into Devotion—published this fall by the University of Nebraska Press as part of its American Lives series—faith feels more like a long, slow undertow. Her journey is nestled in the quotidian, which makes it easy to relate to. For every dramatic conversion moment, after all, there are many gentle nudges.

Livingston, a veteran essayist, interrogates these nudges with intensely lyrical language. The spine of the book is her search for a statue of the Virgin Mary she remembers from her childhood in Rochester, New York. In a sense, her search for the statue is also a search for younger self. This investigation takes Livingston around America and the world—visits to New Mexico and Ireland are particularly vivid—and along the way, she exercises her strong eye for mystical moments that rise up from the everyday. The faith she explores gives her (and us) another way of looking at reality in which the sacred is everywhere, continuously seeping into our vision so we can notice it when we’re ready.

Livingston’s first essay collection, Ghostbread, won the AWP Book Prize for Nonfiction and was published in 2010 by the University of Georgia Press, which also released Ladies Night at the Dreamland (2016). Her collection Queen of the Fall: A Memoir of Girls and Goddesses was published in 2015 by the University of Nebraska. She is an associate professor of English at Virginia Commonwealth University and teaches in the postgraduate program at Vermont College of Fine Arts.

She spoke with Good Letters contributor Steven Wingate about the journey that led her to her latest book.

Image: In reading The Virgin of Prince Street I thought often of other books about coming to Catholicism: Radical Reinvention by Kaya Oakes, Lit by Mary Karr, The Cloister Walk by Kathleen Norris. What books were on your mind as you wrote this one?

Sonja Livingston: I feel a special kinship with Kathleen Norris, who selected my first book for the AWP Prize in Nonfiction, and I must have channeled some of the openhearted seeking of The Cloister Walk while writing. Religion is a tricky topic, so I was buoyed by anyone brave enough to take it on. That said, a point of departure from the works you mention is that The Virgin of Prince Street is about returning to a tradition that provided rare solidity to my early life. My childhood church was a true sanctuary to me, and I gladly served as an altar girl and continued to attend mass through my college years.

The Virgin of Prince Street is about rediscovering that connection while exploring how and why it’s shifted for myself and so many others over the years. The late essayist Brian Doyle was a strong influence. His unabashed exuberance for language and Catholicism inspired me while I was writing essays that so directly attempt to mine the depths of mystery and tradition.

Image: Can you talk about the process of putting this project together?

SL: An essay is a dynamic construction that requires nothing so much as persistence and faith that it will lead to some unforeseen moment of revelation. I often struggle to understand where an essay is headed. My main job is to keep at it anyway. Which is to say that I had no plan for a book when I began to write.

Instead, I wrote an essay at a time over three years, and eventually they began to look like stepping stones suggesting a direction and path. Each takes up a specific question or experience related to Catholic tradition—such as visiting a mobile confessional unit in Louisiana, attending mass in a county jail on Thanksgiving, or remembering my very unusual first communion—with a search I undertook for a missing Blessed Virgin Mary statue interspersed throughout to help frame and organize the book.

Image: Two worlds we both share—literature and academia—aren’t always welcoming to faith. What’s it like for you being a religious person in these worlds, and how do you get along in situations when faith isn’t welcome?

SL: My department enlarges cover images of faculty books and hangs them in our conference room. I was curious to see what would happen with this book—but there it is, Blessed Virgin Mary keychain and all! I sometimes look at it during faculty meetings and smile, because you’re exactly right, academic and literary establishments don’t always welcome religious topics—or rather, they aren’t easily open to personal approaches to the topic. Religion is a respected area of scholarship, but only when sifted through the no-nonsense filter of the head and kept at a safe remove from the messier terrain of the heart.

One of the writer’s main functions is to notice what’s not being talked about and to go there. These topics aren’t always what you’d expect. For instance, my graduate students seem comfortable writing about family trouble, sexuality, and gender identity—which is wonderful—but I notice how sheepish they become when someone puts the word God into an essay. This isn’t surprising. We are massively divided as a culture, with religion increasingly playing into how we label and understand that divide. That said, I’ve been delightfully surprised by how people have connected to these essays and actually want to talk about their own experiences and complicated relationship with religion.

Image: Catholicism is an especially problematic faith right now, with so many of its troubles in plain sight. You write, “I do not let my appreciation for the tradition blind me to its abuses and faults, but neither do I let my anger and disappointment rob me of its riches.” What goes into this balancing act for you?

SL: In a strange way, returning to a tradition that’s so obviously troubled has expanded my capacity to find and appreciate what’s good in myself and others, even as I struggle with the inevitable flaws. My usual pattern of walking away from jobs and people and places that disappointed me was suddenly and radically challenged. And thank goodness! I now see how hollow that sort of love is, and how ultimately impossible. There is no perfect church. There is no perfect anything. This doesn’t mean that I excuse bad behavior or am happy with the status quo—only that I discovered that the only thing I can actually recalibrate in moments of profound doubt is my capacity to sit with disappointment and hurt when they come, and to locate goodness despite them. This has been life-changing. 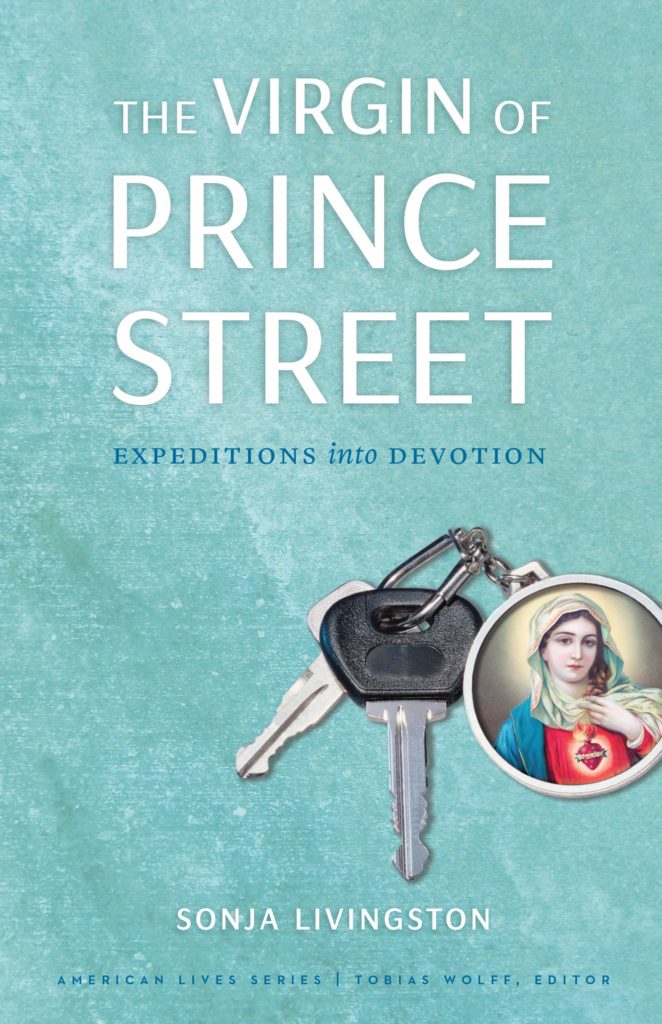 Image: Catholicism is a physical faith, as you note when you say, “the Roman church, with his dogged insistence on the physical manifestation of the divine, fostered a tradition that, for better and worse, remained bound to the body.” In The Virgin of Prince Street this expresses itself in a beautiful physical lyricism. Can you talk about the relationship between language and physicality?

SL: Catholic Mass is a feast for the senses. Everyday objects are imbued with mystery and significance. Holy water clings to the fingertips as we make the sign of the cross on the body. The great panel of stained glass leaks its blues and greens into the sanctuary. The priest chants the Eucharistic prayer. Saint Anthony stands with his staff of lilies, holding the infant, as he’s done for the past hundred years. The sheer physicality of Catholic tradition elevates the ordinary and tunes us into a profound sense of the sacred underlying the things of this world.

But nothing is as heightened as language. I think of being held in my mother’s arms as an infant, sprinkled with water and anointed with oil, but also baptized by language itself, which soaked in through every cell and hooked me before I could even speak.

SL: I’m interested in the idea of confession versus revelation. I’d done a lot of revealing in my writing—this is my fourth book of personal essays, and the topics have been those I struggled to speak of aloud, such as growing up poor or fertility and the female body. But nothing has felt as vulnerable as this book. While those earlier topics were loaded, they tended to be things that happened to me, while exploring and declaring a love of Catholicism was entirely my own act—one I couldn’t make sense of. In other words, writing about having an outhouse in 1970s upstate New York didn’t feel like so much like confession as revelation. Writing about Catholicism left me feeling both implicated and exposed. But that’s where the goods are, both in terms of sacrament and writing itself.

Image: Coming away from this book, I kept thinking of the ways that people guard against the idea of forever, yet sometimes manage to let it slip into their lives and find faith. What are some of the ways you’ve found in your journey to stop guarding against forever and invite it in?

SL: A lot of my resistance had to do with religious language, which is so easily misunderstood, especially these days when it’s often wielded politically. Even something as simple as calling myself Christian is loaded. The word represents radically different things to different people, and maybe even to me on different days of the week.

I also noticed as a child that I didn’t believe exactly as other Catholics seemed to, and I worried this meant I was somehow disqualified from the faith. Here’s something from Merton I just read: It can easily happen that a person loses his Christian faith as a result of forcing himself to try to accept a view of the Church, or of God…which is so distorted that it is practically false.

Steven Wingate's most recent book is the novel Of Fathers and Fire, published April 2019 by the University of Nebraska Press.