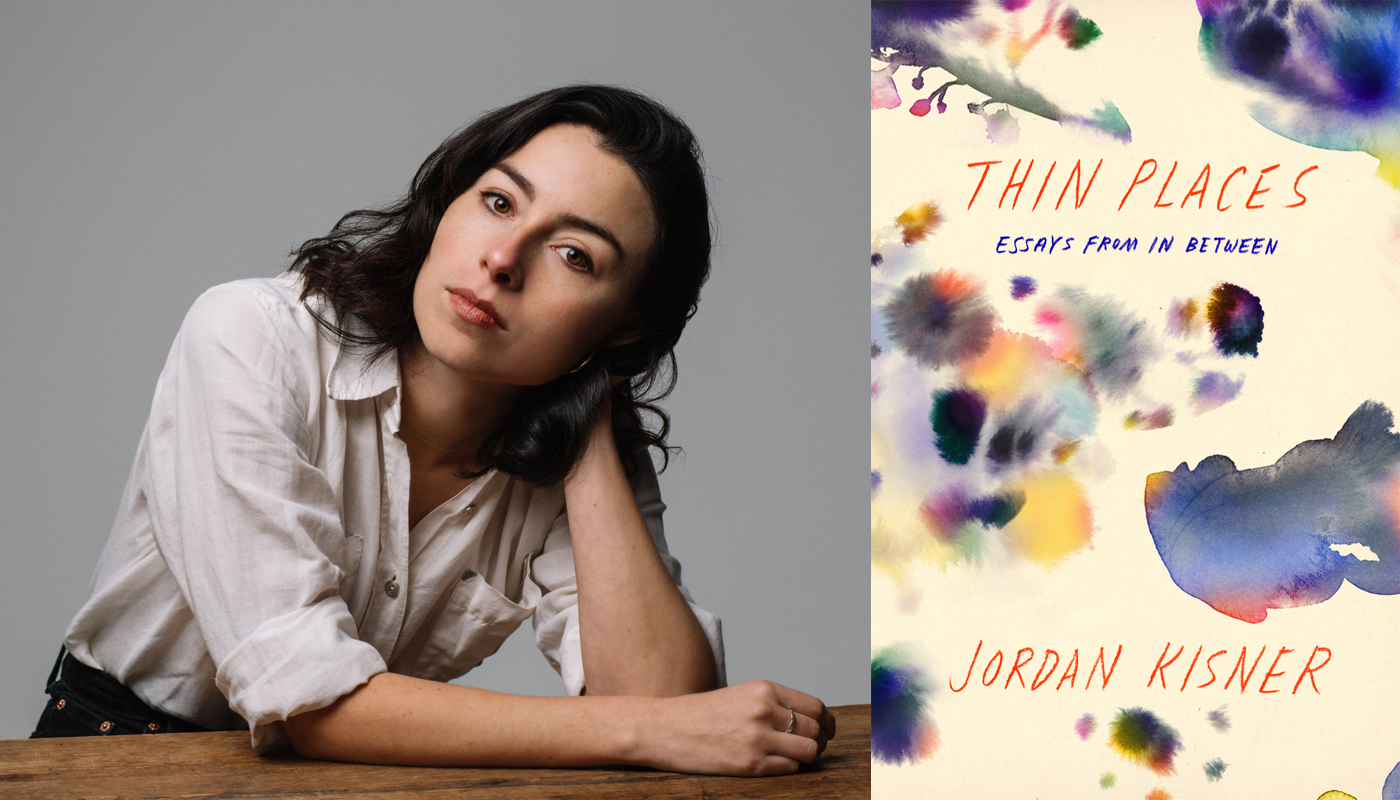 The essay demands perplexity and rapture, obscurity and pattern, the bright kniving in of the sweet spectacle. “Let us simmer over our incalculable cauldron, our enthralling confusion, our hotch-potch of impulses, our perpetual miracle—for the soul throws up wonders every second,” Virginia Woolf wrote of Montaigne, and in the company of fine essayists, we do. Simmer, I mean. Stew. Wander through articulated wonders.

Emilie Pine’s essays in the collection Notes to Self practically ooze—a father’s drink and excrement, a body’s blood and babies, the liquid pain of revealing a truer self. Esmé Weijun Wang, in The Collected Schizophrenias, writes of herself with such stunning clarity that we sometimes forget she is telling her own story. Jia Tolentino, in Trick Mirror, revels in millennial contradictions and reversions, endings that are not necessarily conclusions, conjectures and an uncertain hope for non-relative truth.

Jordan Kisner, whose first book, Thin Places: Essays from In Between, is out from Farrar, Straus and Giroux this month, simmers in sui generis ways, though parsing her originality, wanting to define it, has set me off in pursuit of a unified theory.

Possibility: Kisner possesses a fully dimensional I, a personal pronoun that moves with ease across interior and exterior spaces. Writing in the essay “Attunement” of her conversion to Christianity as a child, for example, Kisner employs migratory language that captures the sound of the voices seeking young Kisner’s attention as well as the imagery of a mind inclined to yield. The world leans in with its promises, in other words, the young Kisner leans out with her imagination, and, within that sacred, osmotic space, faith begins to bloom.

Jesus was a new fairytale, walking on water, multiplying fish, but their description of God, an all-knowing, all-loving being who watched over every step I took—this slid into my consciousness easily. I was already aware of a great Somethingness at work in the world. The signs were everywhere: the way I saw symphonies of color when I closed my eyes to think; the way ocean tides felt sentient, like a creature to whose moods I submitted my body; the discovery that air looks invisible but a bright light beamed in a dark room reveals millions of particles swirling.

Kisner’s I grounds and weaves, sorts and feels, operates under laudable (by which I mean unshowy) constraints and yet, where the human condition that she ponders demands it, it breaks free with lyric grace.

In “The Big Empty,” an essay about a 2012 art installation by Ann Hamilton set in the massive Park Avenue Armory of New York City, Kisner nests reflections on the installation, the event of a thread, within considerations of both personal and universal weight—the ways in which we behold space itself. “When I was a child, I inhabited spaces with a basic indifference to the principles of physics, the proportions of my own body, or the fact that the mind cannot actually manifest the contents of its own imagination,” she writes, with calming intelligence. “I looked at tall buildings as if I could fly.”

The steadfast control of those sentences is counterbalanced later on in “The Big Empty” when Kisner, after experiencing the “dualities” set forth by Hamilton, and after confessing that she herself “can’t get enough space,” grows increasingly expansive. Her language, unstoppered, roams.

There are days when this space of the mind feels expansive and clean, like the horizon line at the Pacific. And there are days—or weeks, or months—when its landscape is reduced to the size of an antique shop, suffocated by teetering stacks of chairs and dusty old keys amassed in plastic buckets under scratched records going for a dollar each.

Kisner’s I never loses its own mind, perhaps I’m saying. But it is also joyfully unafraid of its own conceptual and linguistic adventures.

Another possibility: Kisner reliably hints at where her essays are going (we learn to take note of her titles, for example), but she leaves us pleasingly startled when we arrive at her final destinations. She hasn’t tricked us, I don’t think. She has just outpaced us.

Take the title essay, “Thin Places.” Here we are ushered into the realm of a deep brain stimulation—“The electrode is the width of angel-hair pasta,” the essay begins—practiced upon a patient who, we start to understand, is a fictive composite assembled from a cast of real people who have been diagnosed with severe obsessive compulsive disorder and acquiesced to the invasive procedure. We are several pages into the essay—we’ve been presented with science and diagnostic conundrums—before what we have come to suspect is unambiguously stated: “Thin Places” springs from a deeply personal place:

This is more or less how grown-ups talked about what was wrong with me for several years after I was diagnosed with OCD at thirteen. I was, clinically, a nervous wreck, and many of my fears were about the transformation of my own mind. Was I insane? Was I doomed? Was this who I really was?

“Thin Places” does not now exclusively dwell on Kisner’s experience with OCD; it keeps moving. Kisner puts forward the personal and the scientific, the historical and the contemporary, the proposed and the actual, Eula Biss and disrespecting pop culture. She both limns and transcends the OCD condition as she works, until, in the final pages, the ultimate obsession of the piece is revealed. All along, as it turns out, Kisner has been taking us to those thin places where “[d]istinctions between you and not-you, real and unreal, worldly and other-worldly, fall away.” This is no longer the realm of deep brain stimulation. This is the realm of being.

A further possibility: Kisner’s chosen subject matter does not feel random, overworked, or borrowed. She does not write on trend, she is not self-consciously cool, she doesn’t care if you know how much she cares about things like Jesus raves, the underground life of trees, or the “self-abnegating attention to detail” of the Shakers. One senses that Kisner takes her time before she settles in: Is there a story here? you can almost hear her asking herself. And if there is, how do I make it my story, a story only I can tell?

In “The Other City,” Kisner follows her curiosity into the lives of death investigators—the people who piece together the mysteries of people who die all of a sudden, with no notice, no goodbyes. We are asked, as the essay unfolds, to imagine:

Say you are found on your bathroom floor, on a grassy knoll of someone else’s front yard, in the berth of your tractor trailer, in your own bed, at the foot of a bridge, under a car well, in the car, caught in the bend of a river, collapsed in a bar, alone in the remains of a scorched kitchen.

Right off the top, then, there is no doubting Kisner’s commitment to the story she’s decided to tell. She’s not just collecting facts, not just prettily reporting. She’s all in, imagining a litany of endings, extending (for an extra beat or two) that litany, establishing the awful relevance of the death investigator’s job. Kisner will introduce characters, conversations, choices, dead bodies over the course of this piece. She will render unto us a collection of her findings. But she will never stray far from her precipitating preoccupation—the idea that we are all at risk for leaving the life that we love:

But I had some impulse to witness the end of the body. If I could see the frightening truth, then—then what? Then I’d be prepared? Then I’d be able to more fully appreciate the body as a flawed by intact miracle when it is whole?

“Backward Miracle,” likewise, is ostensibly about tattoos, but the generative force of the piece is love (I refuse to spoil it by saying more than that). “Habitus,” ostensibly about “the paradox of a borderlands George Washington celebration, respectability politics, assimilation and class anxiety, the need to be American that seems to grow stronger and stronger the closer you get to the border,” is, of course, about something much more, a something Kisner tangles with in real and personal ways.

She has made us care that deeply about the I behind the essays.

Beth Kephart is the acclaimed author of nearly thirty books, an award-winning teacher at the University of Pennsylvania, and co-founder of Juncture Workshops. Her essays appear widely. Her memoir in essays, Wife | Daughter | Self, is due out from Forest Avenue Press in February 2021. More at bethkephartbooks.com.