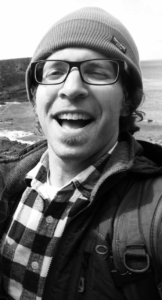 The strange turns toward Andrew Graff’s writing. Faith, in his latest story in Image, is explored like a body, etched into existence by the outline of embrace. Graff’s writing does not preach; instead it examines, examines faith as furiously as it describes blue-painted horses, or the electrical fire in a brick-backed closet, or hydrangeas straining toward the sky.

In a recent Editors’ Foreword to the Cedarville Review, Graff writes that “To ask an artwork to preach the way a sermon preaches is akin to asking a bridge to preach the way a sermon preaches. Bridges can’t preach, and we don’t expect them to.” Devoid of sermon, yet drenched in devotion, Graff’s story “The Ecstasy of Saint Carolyn Theodore Burtanski” speaks to the devolution of love to duty, the hope in religious experience, and the sometimes silly—but completely serious—ways in which we pray.

His writing is odd and compelling and funny, and it extends far beyond what we have featured here. The Image Staff is excited to see where Graff’s next projects take him.

Andrew’s fiction and nonfiction has appeared in Stolen Island, Dappled Things, and Image. He currently teaches fiction and poetry workshops at Cedarville University and serves as editor of the Cedarville Review. In 2009, Andrew became an Iowa Arts Fellow and earned an M.F.A. from the University of Iowa Writers’ Workshop. In 2011, he was awarded the Clark Fisher Ansley Prize for Fiction.

I’m most hopeful about the two novels I’ve got going. The first, Bread and Fish, is complete. I’m in the process of finding it representation. I already have a sock-drawer novel behind me, so I really hope this one finds legs. The novel is a modern day Huck Finn sort of story, with two ten-year old boys running from something and toward something through the deep woods of Northern Wisconsin (my childhood home). The story is filled with black bears and storms and waterfalls and stars. I’m happy with it. The second manuscript is only about three chapters deep into a rough draft, but I’m hopeful. The working title is The Seven Priests of the Land of the Beaver. This one is set in 17th century New France. Writing something historical presents a challenge I never thought I would choose, but I’m attracted to the idea of a northern pine forest in the dead of winter, populated by Native Americans, French trappers, and Jesuits. So far I’ve been hiking the young protagonist up a trap-line through deep snow, amidst cedars and dogwoods and very lost priests.

Overall, I really love reading well written Middle Grade and YA novels, especially realism with a touch (just a drop) of the fantastic or supernatural. Lauren Wolk’s Beyond the Bright Sea is an excellent example of the kind of books I love. I just came across her novel. It’s so good: lyrical, serious, but also restrained and well-plotted and joyful. That’s where I hope I’m writing.