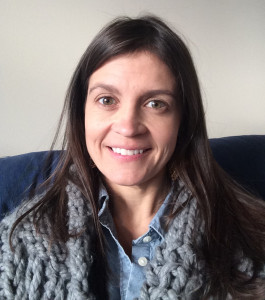 Bronwen Butter Newcott’s vivid poems make the landscape of southern California a parable for a relentless spiritual seeking. That urban and suburban desert makes a weirdly off-kilter analogy to the holy land—a paved garden of magnolia and honeysuckle scoured by dry winds, a man-made oasis in an arid zone, which becomes an arena for meeting the holy. In polished, graceful language, Newcott observes both of the lushness of bodily life and the threat of death beneath the surface. She writes unflinchingly, unsentimentally of the loss and decay present even in our American arcadia. She lingers over tastes, smells, and sensations with a precision both fervent and erotic. The poems pulse with a yearning for something just beyond the field of vision, something maddeningly withheld. The selves in her poems long for God to act, to reveal himself, to remake the imperfect world.

Bronwen Butter Newcott’s poetry is featured in Image issue 86, and her poem “Creed in the Santa Ana Winds” was featured in a Good Letters Poetry Friday post. Read her poems here and here.

Bronwen Butter Newcott lives in Washington DC where she writes and shares life with her husband and three children.  She earned an MFA from the University of Maryland, spent a decade in the southern California sunshine teaching and writing, and is glad to be back east for now. Her poems have appeared in Image, Indiana Review, Prairie Schooner, Missouri Review, Smartish Pace and other publications.

A teacher once told me that until a manuscript is published, the book is never done.  I’m finding that to be true as I currently—and continually—finish my first manuscript Wing or Bone.  It meditates on the mysteries I find irresistible—the seen and unseen, what is present and has vanished, time’s history and insistence—through familial story.  Most of my time, writing and living, exists in the muscular tension between each of those pairings.

Since last summer, I have also been working on a juvenile fiction novel that I began writing for my son. It’s about two neighborhood kids who are launched into an adventure as they begin to realize a vibrant unseen world exists all around them.  I continue imagining into the questions I love.

This spring I plan to launch a new writing project.  I’ll be attending a residency and in that cleared space, hope to begin work on a second poetry manuscript.