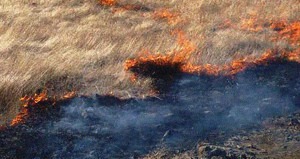 Growing up in southern California, I experienced the uneasy allure of the Santa Ana’s hot fall and winter winds that swept down from Nevada’s Great Basin. They whipped up the dust and screamed against the windowpanes. In the drier mountain areas, they ignited fires; in my coastal town, they seemed to blow the stars through the air. As legendary as the full moon, the winds sparked dangers physical and fantastical. Did the fault lines lose their grip in the heat of these gales? Did we? In “Creed in the Santa Ana Winds,” Bronwen Butter Newcott captures—or, shall I say, chases—the fury of the Santa Ana’s in the shadow of an even more powerful, and incalculable, Creator. Her exacting imagery blows those winds through my soul again, two decades after I left.

Creed in the Santa Ana Winds by Bronwen Butter Newcott

You believe He’s stronger than the desert wind
butting against the fence, wind that ignites sagebrush,
tears through the hills and strips the houses to ash.

Despite your lips that crack till blood comes,
skin that grows rough between your fingers,
you believe He will be solid to your touch

the way the bay is slate each dusk, broken only by fish
that hurl themselves toward the pearling sky.
The wind that takes a voice in the night

makes the house uneasy, shouts as the fence flattens.
You stand watching the junipers thrash and knit pleas
into the darkness; you believe He hears. In the morning,

there are six dead kittens on the driveway, a cat
moaning beneath the house. You pick them up by the neck
and put them in the trash. One day, you believe,

God will blow this all down, skin the world
to dust and water and make something new, but for now,
the noise of trees thrashed and cracked covers the ground.

Bronwen Butter Newcott grew up in Washington, DC. After completing her MFA, she moved to southern California with her husband where she taught high school, art journal workshops, and had her first two children. She now lives in the DC area with her family. Her work has appeared in Prairie Schooner, Indiana Review, Smartish Pace, Poet Lore, and other publications.