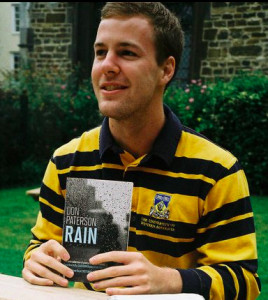 Twelve years ago in Image issue 33, Bret Lott wrote that he often found talented young writing students who were so afraid of sentimentality that they were unwilling to risk real emotion. After describing what he calls the diminishing returns of irony in contemporary fiction, he quotes David Foster Wallace, who wrote in 1993 that: “The next real literary ‘rebels’ in this country might well emerge as some weird bunch of anti-rebels, born oglers who dare somehow to back away from ironic watching, who have the childish gall actually to endorse and instantiate single-entendre principles. Who treat plain old untrendy human troubles and emotions in U.S. life with reverence and conviction. Who eschew self-consciousness and hip fatigue.” Lott ends by saying he thinks Wallace is right: “The radical move right now is to have hope, to look out at the world in love in order to discover it anew in whatever way you can, in whatever form you can.” We think Bryce Taylor’s fiction—charming, funny, wise, and earnest, contemporary but never cool—is a cheering fulfillment of Lott and Wallace’s predictions. A young writer of energy and promise, Taylor has the courage to trust that telling a simple story well can be a means of revealing something profound.

Some of Taylor’s work is in Image issue 80. Read an excerpt here.

Bryce grew up in Orlando, Florida, until the age of twelve, when his family moved to Dallas, Texas. Beginning in 2007, he attended Yale University, where he majored in English with a concentration in fiction writing. His senior thesis was a short story collection titled Megachurch. He then earned a Master of Theological Studies degree from the University of Notre Dame. He has spent the past year teaching English and Theology at a Catholic high school in the Dallas area.

“A writer,” said J.D. Salinger, “when he’s asked to discuss his craft, ought to get up and call out in a loud voice just the names of the writers he loves.” For me, they are (in no particular order) C.S. Lewis, Frost, Chesterton, Plato, Flannery O’Connor, Dostoevsky, St. Augustine, Newman, and Salinger himself. The beauty and brilliance of their words have inspired me to go and do likewise–or in any case, to try.

My writerly interests are various: fiction, lyric poetry, essays, screenplays. For now I am working, rather slowly, on a collection of short stories that explore memory, loneliness, joy, and the struggle to maintain religious urgency in the face of modern indifference. The collection’s working title is Stories About Jesus.