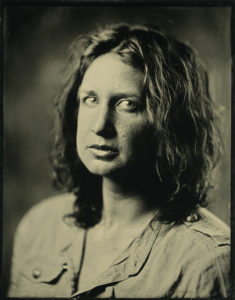 Chalked with earth, Cyan James’s writing has an almost mythic physicality to it. Place permeates her stories. In her work of fiction in Issue 98, the smells of mangoes and athletic tape, bright purple, drift across the page, and vultures drift through sky and memory, their shadows cool. Landscape and mindscape are overlaid; the retreat of a grandmother’s mind to India laps up against the protagonist’s veterinary apprenticeship in Nebraska. The stories around us and the way we tell stories about place shape who we are. James recognizes that. She is informed by her surroundings and attends to them with an exacting devotion, encouraging readers to do the same.

You can read James’s story “It Is Possible to Give a Vulture Too Large a Task” in Issue 98.

I live in northern Virginia, where I split my time between coffee shops, my fireplace, and trails in the Shenandoah. The history surrounding the area is both rich and fraught, providing a constant source of mental inspiration and friction. While writing is best done “rump on sofa,” thinking, for me, happens best on the road. I bring a camera and a notebook, and am often happiest hunting prehistoric shark teeth, witnessing the horseshoe crab migration, or otherwise contemplating how our world is complexly bound by rhythms outside the ken of the modern everyday.

At my work desk I am a health analyst. In a typical day I might be working on synthetic biology, cognitive neuroscience, PTSD, and food supplements, among other things. This churn of topics is a cornucopia for ideas—science, for me, bleeds readily and inextricably into the arts.

The divisions between types of writing, for me, are likewise permeable. The substrate is always words themselves, those elegant little bricks that can build such robust ideas and summon such powerful emotions. A poem, an essay, a short story, or a novel are merely different sized and shaped homes for the kernel of idea that inhabits them.

As a public health geneticist, I often consider how genetic context—environmental exposures, stress conditions, and factors of inheritance and personality—influence a person and a population. There is no easy, simple, or rational way to rip an individual from her surrounding context, and the same applies to writing. The history and cultural landscape surrounding a work cannot be severed from it. So I think of writing like being a detective—what has come before a piece; what surrounds it; what will be coming after?

Just as writing does not stand independently from its context, it does not steer clear of responsibility, I believe, to think seriously about what it portrays, what empathy it inspires, and what vagaries and niches of the human mind, heart, and soul it illuminates. Sure, a piece of work can aim to entertain, but what else can it do—can it draw the reader into a compellingly different way of thinking; can it spin the known world on a slightly different axis? If not, what exactly is it doing?

For me at least, the page is a trail. I don’t know where it’s going, what I’ll see. At the moment my writing walks over a lot of gravestones. Hard to be vibrant, living humans, I’m convinced, without also being aware we’re going to die. So I write about death, and want to be better at writing about power and also about the kind and merciful strata running through us and our systems. Why do we fight each other? Why don’t we do more about climate change? Why are we so bad at watching a hummingbird for an hour without a smartphone?

Currently I’m wrestling with two novels, one about eugenic sterilization and early efforts in psychology and behavioral reform at the sanitarium where corn flakes got their start, and the other about B-52 bombardier-navigators bombing Cambodia during Operation Menu. I abhor the horrid things we do to one another, but also try to remember there is no simplicity to complicit decisions. The blood gets everywhere. I’m also wrestling with the fact that writing is just hard, a privilege, but hard. I want more time for it, more skill at it, just…more. Five more lives at least, but I’ll take what I can get. When I’m not working on the novels, I compose essays and poems and short stories and literary mutts and sometimes policy pieces. Thank you for reading.