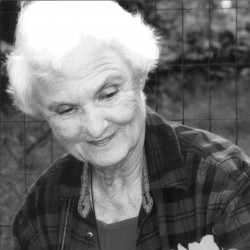 Of Elinor Benedict, Carolyne Wright writes: she “gives us a rich cornucopia of images in a celebration of connections with family and friends, all leavened with affectionate humor and lyrically understated grief.” Benedict appears, at first, to be a poet of the quiet life. Her poems are rooted in place (Michigan’s Upper Peninsula, Bejing, California) and in ordinary activities (birth, death, marriage, homemaking). But in her loving portraits of particular places and the rhythms of domestic life, she is preparing something extraordinary, setting a stage, building an arena into which ultimate mysteries enter. A quiet but persistent theological act recurs in her poems, a continual echo of the doctrine of incarnation: she shows us how God makes himself present to us right where we are. Her style is refined but generous, almost stately in its careful use of images. As Maxine Kumin writes: “The poet’s voice is clear, direct, yet artful… The sensibility that pervades [her] poems is that of a mature woman with an inquiring mind and a strong sense of family attachments… Almost every poem delivers a sidelong irony, a study in contrasts that is always overridden by the sense of common humanity…”

Some of Benedict’s work is in Image issue 72. Read one of her poems here.

Elinor Benedict grew up in the mountains of East Tennessee, graduated from Duke University, later earned her M.A. from Wright State University, and even later — in her fifties — took an M.F.A. at Vermont College.

She has published five chapbooks and a collection, All That Divides Us, which won the May Swenson Award in 2000 from Utah State University in a national competition judged by Maxine Kumin. She has also published short stories and reviews. Her work appears in magazines such as Poetry, Shenandoah, Indiana Review, Florida Review, Image.

She has worked part-time as a journalist, teacher, and founding editor of Passages North. Now she and her husband Sam spend their time in the wilds of the Upper Peninsula of Michigan and Lower Florida. They like fishing and traveling, often with their three grown children and seven grandchildren.

Although she is in her eighties now, “the late Elinor,” as she sometimes calls herself, is contemplating a new book project called “Early Girl,” based one her poem which appeared inThe Michigan Poet last year. If time permits, she will put together a new book by that name dealing with youth and age.

Her current book, Late News from the Wilderness, was published in 2009, and is still available from the publisher’s website, MainStreetRag.com.