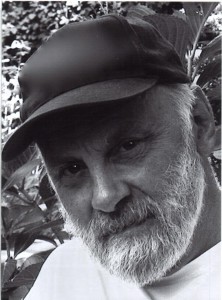 Each poem of Gary Miranda’s is a world of motion, both animal and intellectual. They bound, twitch, shift, and bloom with affection toward time-bound humanity and the objects and ideas that entrance us. Effortless (or at least effortless-looking) and alive, full of wit, energy, and movement, they invite the reader to participate in a dance. Miranda’s poems are the kind Scott Cairns calls sacramental: they create the experience they’re talking about. In an interview (in Image issue 46), Miranda describes his sense of a poem as a living thing, an animate thing, a grace given rather than earned. But a poem is no slight work in his eyes: “One of the great tasks of poetry,” he says, “is to find better names for God.” A poet, translator, teacher, parent, and screenwriter, his career trajectory reflects an unusual kind of humility toward writing. When asked about poetry as a sacred calling, he quotes Rilke, whose poems he has translated: “The Spirit wants only that there be flying. As for who happens to do it, in that he has only a passing interest.”

Some of Miranda’s work is featured in Image issue 46.

Poet and screenwriter Gary Miranda was born and raised in the Pacific Northwest, and currently lives in Portland, Oregon. Gary is very much a product of Jesuit education, having spent six years in a Jesuit seminary after graduating from a Jesuit High School in Seattle. On leaving the seminary, he did graduate work at San Jose State College and at the University of California at Irvine.

Gary’s poetry has appeared in The New Yorker, The Atlantic Monthly, Poetry, The American Scholar, Salmagundi, and, of course, Image—to name just a few. He has authored four collections of poetry and a well-received translation of Rainer Maria Rilke’s Duino Elegies. As a screenwriter, Gary has taken first place in the Venice Arts and CineStory screenplay competitions, and was a finalist at the Austin Film Festival competition. He has also taught creative writing and literature at various universities, most recently as writer-in-residence at Reed College in Portland.

“I stopped writing poetry when I became a father, feeling I couldn’t do justice to both callings, and am currently writing screenplays. It’s been a huge learning curve, but after 10 years I’m starting to depend less on language—that is, dialogue—and learning how to let the visuals bear more of the load.

I just finished a ‘thriller’ (my son makes me put that in quotation marks—’It might be thrilling to you, Papa….’) that’s largely set in Cuba, which was challenging because I’ve never been to Cuba. I have been to Greece, however, and my next screenplay, I think, is going to be based on my experiences as a Fulbright Lecturer at the University of Athens during the reign, and overthrow, of the junta. I say ‘I think’ because my manager, David Baird of Kinetic Management, hasn’t officially signed off on it, and I rely on his instincts almost as much as my own. This—the collaborative nature of filmmaking—is yet another part of the learning curve, but I’ve come to appreciate it.

I should mention that one of my screenplays—’The Cherokee Word for Water,’ a biopic based on the life of Wilma Mankiller, first female chief of the Cherokee Nation—is on its way to production with financing in place and, yes, real actors attached. This one entailed several trips to Oklahoma to confer with Wilma and her husband, Charlie, which was a treat. So watch for it at a theater near you.”