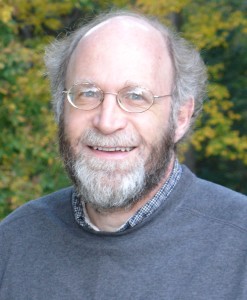 Jeff Gundy is a poet of proportion. With precise imagery, fluid, simple language, and gentle humor, he maps the place of the tiny human self in the vast universe. His conclusion? We are less significant than we think—and, at the same time, infinitely more so. His poetry and essays are rooted in the Mennonite tradition, which he credits with giving him “the sense that things outside of my pathetic life matter, and that I ought to think about my own problems and ambitions in the context of something much larger.” From these roots he draws both a sense of humility and a prophetic impulse—forces that hold each other in balance, protecting against both triumphalism and despair. Though he is unsparing of human foibles (including his own), his idealism is voiced without rancor or self-righteousness. Ordinary human pain, including simple restlessness and dissatisfaction, are part of his territory. Writes Jean Janzen (another Mennonite poet, seeImage issues 8 and 46), Gundy “investigates our deep roots of longing—for God and the other.” Always mindful of human smallness, Gundy nevertheless considers our obligation to make world better with courage and hope.  His poems are populated with the life of the world around him, largely, but not exclusively, the birds, creatures, and landscapes of the Midwest, which he approaches with wonder and awe: “I believe poetry is an interchange with the world,” he writes, “of which the human is only a small part.”

Some of Gundy’s work is featured in Image issue 64 and issue 82. Read a poem of Gundy’s here.

Jeff Gundy’s five books of poems include, most recently, Spoken among the Trees (Akron, 2007), winner of the Poetry Award from the Society of Midland Authors, and Deerflies(WordTech Editions, 2004), winner of the Editions Poetry Prize and the Nancy Dasher Award. Earlier books of poems include Rhapsody with Dark Matter (Bottom Dog, 2000), Flatlands(Cleveland State U. Poetry Center, 1996), and Inquiries (Bottom Dog, 1992). His prose books include Walker in the Fog: On Mennonite Writing (Cascadia, 2005), chosen for the Dale W. Brown Book Award, Scattering Point: The World in a Mennonite Eye (SUNY, 2003), and A Community of Memory: My Days with George and Clara (Illinois, 1996). He was the Fulbright Lecturer in American Studies at the University of Salzburg in Austria in 2008. Other awards include multiple fellowships from the Ohio Arts Council, two C. Henry Smith Peace Lectureships, and (as a regular reviewer of poetry and nonfiction for The Georgia Review) a share of a Silver Gamma Award. His poems and essays appear in Kenyon Review, Christian Century, The Sun, Cincinnati Review, Georgia Review, Antioch Review, Image, Colorado Review, Creative Nonfiction, Quarterly West, River Styx, Tampa Review, Shenandoah, The Common Reader, Poetry Northwest, Pleiades, and many other magazines. He teaches writing, literature, and other courses at Bluffton University in Ohio, where he was Faculty Scholar in 2004-05. Visit his web page here, or look him up on Facebook.

First off, mainly I’m teaching—only three classes this term, instead of the usual four, but it’s still a full-time job, and during the school year my writing life happens mainly in little pockets of time on evenings and weekends. My latest manuscript of poems, tentatively titled All Four Ways,  is off for a publisher’s scrutiny, but I am welcome new poems whenever I can (a continual yearning, though intermittently accomplished). A second project comes out of my Fulbright time in Salzburg; after many false starts and flailing, it is shaping up as a hybrid text, weaving together poems and lyrical essays on Austria and other places we visited. I have envisioned titles as flat as “Beautiful City” and as exotic as “Dialects of Partial Disclosure,” but I suspect that the real one is yet to be revealed. For some years I’ve also been slowly working on another project, which I now see as an effort toward a kind of Anabaptist theopoetics—one that involves testing Anabaptism against poetry and vice versa, rather than taking either as entirely authoritative. One essay, due out soon in a special issue of Crosscurrents on theopoetics, is called “Notes toward the Heretical Sublime.”