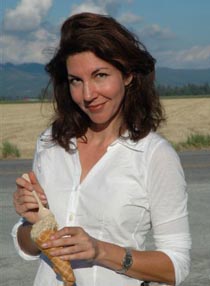 For the past seven years, the Image staff has had the pleasure and privilege of working with Jennifer Maier as a colleague—grateful for her behind the scenes help with the selection of the marvelous poetry that appears in our pages. But until recently, you had to be a subscriber to various literary journals to have an inkling of her own gifts as a poet. No more. With the publication of Dark Alphabet, a winner of the First Book Award in the Crab Orchard Series in Poetry, her own voice as a poet can now be heard. And what a richly modulated voice it is: able to move from wry observation to emotional plangency to that most difficult of all literary feats—comic irony—with a turn-on-a-dime grace that can leave you reeling. Take her poem “Lot’s Wife,” where the narrator confesses that she is sick of looking at her husband’s “righteous backside,” then tells us that she must turn back to the city where she had friends; changed into a pillar of salt, she is tentatively approached by survivors who crawl out of caves and treat her as a salt lick: “They have consumed my heart, / but I will become part of their flesh / and part of my people forever.” In the poem that closes the book, the sight of Merganser ducks outside her window conjures up adolescent memories of beautiful Danny Scarlatti and thoughts of Ovid, Leda, and the swan. A poem about fortune cookies begins with a transcription of the fortune “Answer just what your heart prompts you” and the poem continues, “and shut up about the rest.” Maybe we shouldn’t introduce the word “limpid” in a review that’s already used “plangency,” but the simplicity and strength of Maier’s poetic lines makes us think…“limpid.” Anyway, we’ve had her to ourselves for too long; now she can be your friend and confidante, too.

Some of Maier’s work is featured in Image issue 33 and issue 78. Read a poem by Maier here.

Jennifer Maier teaches literature and creative writing at Seattle Pacific University and serves as an associate editor at Image. A native of Seattle, she’s a graduate of the University of Washington and Tulane University in New Orleans, where her doctoral research explored the relationship between photography and poetry in America in the early twentieth century. She began writing poetry about a dozen years ago (as a way to procrastinate and avoid studying for her oral exams). Her first poem, a mock heroic paean to New Orleans’s giant flying cockroaches, while failing to cure her phobia, succeeded in getting published, and she’s been writing ever since. She now lives on Lake Washington, so rather than large, noxious insects, the migrating birds she watches from her window tend to turn up in her work. Her poems have received many awards, including three Pushcart Prize nominations, and have appeared inPoetry, SWINK, Image, The Mississippi Review, Spirituality and Health, Poetry Daily, and elsewhere. Her book, Dark Alphabet, won the 2005 Crab Orchard Review First Book Award and was published this fall by Southern Illinois University Press.

“In addition to teaching in Seattle Pacific University’s undergraduate and MFA programs and serving on the editorial board of Image, I’m hard at work on a second book of poems, whose shared themes explore the idea of affirmation and assent—spiritual, emotional, physical—in the context of our fallen world. I’m also learning Italian, which helps.”