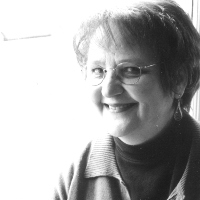 To adapt an old phrase to a new context: we have no hesitation in calling Jill Peláez Baumgaertner a “Renaissance woman.” Scholar, administrator, literary critic, and poet, Baumgaertner is a true servant of the word and the image. Whether she is penning a scholarly essay on the poetry of John Donne, or a feature article about the art of Rodin or Rogier van der Weyden, or a poem exploring her Cuban heritage in a literary quarterly, she helps us to see how words and images can become icons, at once gloriously material and yet windows to another world. Take, for example, Baumgaertner’s poem “Prodigal Ghazal,” published in Image #61. For the Prodigal Son, the memory of the “far country,” where he thought he could be free, is in the end only of “fists and sour apples.” But when he returns home and is met by his father, a feast begins with bread and wine, echoing the eucharistic: “Now comes the filling in of hunger, the bread hunks spilling crumbs. / The wine meant for throats dry with salt and dust. / Here is God, his strokes on our dead flesh / Filling capillaries, sparking nerves. We are fed with the crusts / And blood of forgiveness, with the thrill of its gentle float, its ripe music.” In “For a Birthday and Wedding Anniversary, Two Days Apart,” Baumgaertner contemplates the resonance between these special days. Here a marriage is perceived as the midway point between past and future generations. Even more important than a birthday or wedding anniversary are the sacraments themselves, such as baptism (“a scatter of water / on new flesh”) and the eucharist, which enables the couple to “join the narrative line / that stretches back before they were and reaches / forward, demanding blessing.” Baumgaertner’s words and images join each of our intimate stories to a larger narrative line, demanding—and delivering—a blessing.

Some of Baumgaertner’s work is featured in Image issue 61. Read a poem by Baumgaertner here.

As the daughter of an Air Force officer, Jill Peláez Baumgaertner grew up all over the world but for the past thirty years has called Chicago her home.  She is Dean of Humanities and Theological Studies at Wheaton College, where she is also Professor of English and where she began teaching in 1980.  She has also taught at Valparaiso University, Juniata College, Deusto University (Bilbao, Spain) and The University of the Basque Country (Vitoria, Spain). She holds the B.A. degree from Emory University, the M.A. from Drake University, and the Ph.D. degree in English from Emory.  She is the author of several books of poetry:  My Father’s Bones (Finishing Line Press, 2006), Finding Cuba (Chimney Hill Press, 2001), Namings (Franciscan University Press, 1999), and Leaving Eden (White Eagle Coffee Store Press, 1995). She has also published a textbook/anthology, Poetry (HBJ, 1990); and Flannery O’Connor: A Proper Scaring (Cornerstone Press, 1998).  She has been a Fulbright scholar, was nominated for a Pushcart Prize and is the winner of the White Eagle Coffee Store Press’s poetry chapbook contest, the Goodman Award, an Illinois Arts Council Award, and the Illinois Prize of the Rock River Poetry Contest.  She is past president of the Conference on Christianity and Literature and has served as poetry editor of The Cresset and First Things.  She is currently poetry editor of The Christian Century.

In recent years I have discovered that poetry connected to liturgy has been much more satisfying than any work I have done before. This new direction began with Requiem, a series of twelve poems that were meditations on the service “Burial of the Dead” in the Lutheran Book of Worship.  I have also worked with several composers but most recently published a series of poems, Scenes from the New Testament (Augsburg Fortress), that Carl Schalk set to music for performance or worship.  I hope to further explore liturgy and the lectionary, which provides me with a weekly source for new poems.