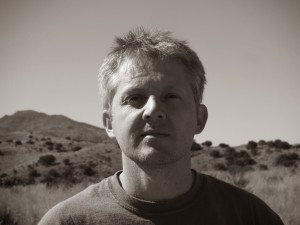 Among John Poch’s many skills as a poet is his ability to craft a long narrative poem and bring it off brilliantly. Narrative has long been out of style in modern poetry, much as it has been in visual art. The idea in both forms has been that narrative belongs to prose, and that poetry and art should be about the materials (language, paint) rather than serve the demands of some other medium. Well, that sort of thinking is changing in the culture at large (some have always objected to it) and Poch’s poem in Image issue 47, “The Race of the Candles,” is one compelling example of why more and more people believe that narrative has a place in contemporary poetry and visual art. The poem takes its story from the annual festival in Gubbio, Italy, celebrating its patron saints. Three massive, heavy wooden candles representing the saints—the ceri —are paraded through town. Then, the three groups holding the candles race to the top of a hill and the basilica that crowns it. Poch writes about the festival, but also takes Dante’s Divine Comedy into consideration, along with St. Francis, who famously tamed the wolf of Gubbio. As a final thread, Poch weaves his relationship with his new wife into the poem—the festival at Gubbio becoming a celebration of the intimacy of the couple’s love and marriage. Here is poetry at once dense and multilayered, yet possessing all the delights of a glittering surface.

Some of Poch’s work is featured in Image issue 47 and issue 68. Read a poem by Poch here.

John Poch was born in Erie, Pennsylvania, in 1966. He has an M.F.A. in Poetry from the University of Florida and a Ph.D. in English from the University of North Texas. He was the Colgate University Creative Writing Fellow from 2000-2001 and now teaches in the creative writing program at Texas Tech University. His first book, Poems, was published in January 2004 from Orchises Press. His chapbook of fifteen sonnets, In Defense of the Fall, was published by Trilobite Press in 2000. He was a recipient of the “Discovery”/ The Nation Prize in 1998 and has been awarded residencies at the MacDowell Colony, the Saltonstall Foundation, and Blue Mountain Center. He has published poems in Ploughshares, Paris Review, The New Republic, Yale Review, New England Review, Southwest Review, America, and many other magazines. He is now the editor of 32 Poems Magazine.

“I have a limited edition letterpress book, Ghost Towns of the Enchanted Circle, forthcoming Fall 2006 with Flying Horse Press. It is a set of 14 poems (mostly sonnets) published with color prints by nationally known artist Ryan Burkhart. My second full-length manuscript of poems,Dolls, is currently circulating among publishers, trying to find a home. I continue to write poems toward a third collection of verse.

I have a new daughter, seventeen months old, who has gotten me more interested in children’s books, and I’ve got a few manuscripts of my own already underway. I also continue to edit 32 Poems Magazine, and am proud to say that two of the poems we published last year appeared in the 2005 Best American Poetry .

Another book, The Essential Hockey Haiku, a collaboration with Chad Davidson is being published this fall with St. Martin ‘s Press. We think it’s funny, but we’ll see how it’s received. Years back, when I attended the Writer’s Workshop, a few of my classmates called me Mr. Serious. Hopefully, this book proves I’ve loosened up a bit.”