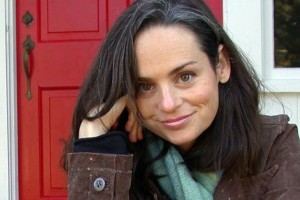 It’s sheer delight to watch the mind of Julianna Baggott at play. Her poetry and fiction are marked by a childlike, rapacious curiosity, vivid imagination, and unselfconscious wit—and her writing is also polished and full of style. She has the rare gift of being able to blend a pop sensibility with a respect for more elusive kinds of beauty. Her knack is for honing in on the lurid, the sensational, the fascinating, and then, through sustained attention, allowing it to become profound. Says Madison Smartt Bell, “Few writers of the twenty-first century can rival the verve, the energy, and the sheer delight in language of Julianna Baggott.” In her new collection, Lizzy Borden in Love: Poems in Women’s Voices, she borrows the voices of American heroines and anti-heroines, using their stories to investigate history, biography, culture, and private psychology.

Some of Baggott’s work is featured in Image issue 46.

Julianna Baggott is the author of four novels—including national bestseller Girl Talk and Which Brings Me to You (co-written with Steve Almond), as well as three books of poems, including Lizzie Borden in Love and, forthcoming,Compulsions of Silkworms and Bees. She also writes novels for younger readers under the pen name N.E. Bode—The Anybodiestrilogy (in development with Nickelodeon Movies at Paramount Pictures) and a fantastical Catholic novel The Slippery Map (2007). N.E. Bode is a featured essayist on XMRadio’s XMKids. Baggott’s work has appeared in dozens of publications and anthologies, including the Best American Poetry series, Glamour, Ms., Poetry, and TriQuarterly, and has been read on NPR’s Talk of the Nation. She is the founder of Kids in Need – Books in Deed, which provides free books and author’s visits to underprivileged kids and teachers at Florida State University’s Creative Writing Program, and lives in Tallahassee with her husband and three young children.

“I have three books coming out in 2006 in three different genres. Which Brings Me to You: A Novel in Confessions (co-written with Steve Almond) will appear in April.The Somebodies—the third novel for younger readers in The Anybodiesseries (written under the pen name N.E. Bode)—will be published in the fall, as will my second book of poems, Lizzie Borden in Love: Poems in Women’s Voices. This seems odd, especially since I never thought I’d be a novelist or poet. I saw myself, originally, as a short story writer—which I do very little of these days. I suppose, creatively, I try to follow my passions, which are far-flung. I know that two more books for younger readers are in the pipeline, and, poetically, I’m at work on a collection of poems entitled 52 Sundays, which are reflections on the gospels. This was supposed to take one year—hence the title. But I know now that it will take many years of fits and starts, and headlong rushes. As for adult novels, honestly, I’m at a difficult place—a specific form of writer’s block, if you believe in that kind of thing. I think that the publishing industry has picked my pockets, somewhat, robbing me of a love of that form. I confess this is an issue that I’m taking up with the Holy Spirit. For some reason that sentence sounds like I’ve taken a number at the deli counter and I’m waiting in line. No, no. This is heated, arduous. I’m fighting—when, of course, there’s no need to fight.”