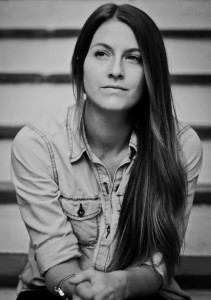 Gifted newcomer Kristin George Bagdanov is a border-crosser: in her poems, she moves her needle back and forth across the gap between mind and body, heaven and earth, human and nature, human and divine, then pulls the thread tight, drawing the panels together. Her poetic voice is patient, contemplative, unselfconsciously lyrical, never showy, with flashes of humor (“the peach always ending / in a pit”). She draws much of her imagery from nature, managing to find fresh meaning in traditional material: a bird nesting above a florescent lighting panel, a nursing child, dolphins choked by plastic refuse, bears snuffling for bulbs, an exacting father. In a statement on her poetry, she writes, “I have likely provided more images and metaphors than logical answers. But that is part of the reason we need poetry—to understand that metaphors can be answers.” Skilled at perceiving and teasing out likenesses between surprising things, she makes a welcome guide through metaphor’s landscape.

Some of Bagdanov’s work is in Image issue 80. Read one of her poems here.

Kristin George Bagdanov earned her B.A. in English from Westmont College in Santa Barbara, CA and now lives in Fort Collins, CO with her husband and cat. She currently attends the M.F.A. poetry program at Colorado State University where she teaches college composition and works as an editorial associate for the Colorado Review. She is also a current Lilly Graduate Fellow. Her critical and creative interests often converge in the areas of ecocriticism and ecopoetics, and she hopes to attend a PhD program in literature after earning her M.F.A.

Kristin’s poems have recently appeared in The Los Angeles Review, 32 Poems, CutBank, Redivider, Ruminate, and Rattle and her poetry chapbook We Are Mostly Water was published by Finishing Line Press in 2012 as part of their New Women’s Voices contest. Her book reviews and blogs can be found on Ruminate Magazine and more of her work can be found at www.kristingeorgebagdanov.com.

My current project asks: what is a body? While this question appears simple at first glance, sixty or so poems later, I’ve found there is no single answer. Tired of the mind/body split, the human/nature and secular/sacred ones too, I’m trying to understand what it means to be a body in time—whole, holy, and ever changing. Some of my guiding questions for this project include: How is the body “constructed” in response to its environment like one’s sense of self? How do human and animal bodies interact? Divine-human? Environment-human? What does a sorrow body, commodity body, desire body, monster body, father body look like, sound like? How is our current ecological crisis inscribed on our bodies? How does one’s treatment of one’s own body affect one’s treatment of the “other”?

Writing a poem is, for me, an act of body-spirit—the two cannot be separated. As I write the poem, I have no idea where it is going to lead me, or if it will lead me anywhere. If I do know, then that isn’t the poem I need to be writing. Continuing to write into that uncertainty then, is an act of faith—faith that somehow language can reach beyond my own limits. This reaching parallels my desire for God. As I reach toward the mystery of the poem, I reach toward the mystery of the divine. After I have written a poem that feels like it has arrived somewhere new and unexpected, I am overwhelmed by doubt: will I ever write a poem “like this” again? The answer is, of course, yes but also no. This posture is akin to my reach toward God—the fleeting moment of presence I might experience, which is inevitably followed by a poignant experience of absence, of doubt that I will ever again brush my fingertips along that presence. So: I keep writing.