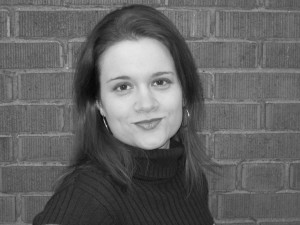 Lisa Ampleman is a modern troubadour. The great subject of her poems is love, and she explores love’s territory with persistence, imagination, and wit. Taking up the mantel of Dante and Petrarch—with an attitude of playful curiosity—she consciously inherits the tradition of courtly love poetry, both reveling in and troubling its favorite tropes. Her beautifully wrought poems can be grim, funny, and shockingly beautiful, all in a matter of lines, and her easy, playful command of imagery ranges from the natural world to the literary cannon to popular culture (her favorite metaphors include insects, sickness, poison, and music). While her poems often perform a sort of literary-critical interrogation of her forebears, she is also capable of great warmth, immediacy, and humaneness. One of our favorites (from issue 80) is a love poem about a couple cleaning their gutters—a straightforward and tender portrait of a marriage that is all the more lovely because of its unsentimental subject matter.

Some of Ampleman’s work is in Image issue 80. Read here.

Lisa Ampleman is the author of Full Cry (NFSPS), winner of the Stevens Manuscript Competition, and I’ve Been Collecting This to Tell You (Kent State), winner of the Wick chapbook competition. Her poems have appeared or are forthcoming in Poetry, Kenyon Review Online, 32 Poems, Massachusetts Review, New Ohio Review, New South, Notre Dame Review, Poetry Daily, and Verse Daily.

She holds degrees from Beloit College (BA), George Mason University (MFA), and the University of Cincinnati (PhD). Ampleman was the Mona Van Duyn Scholar at the 2013 Sewanee Writers Conference and has been awarded two Dorothy Sargent Rosenberg poetry prizes. She lives in Cincinnati.

I’m putting the finishing touches on my second book of poems, The Rules of Courtly Love, which engages with the courtly love tradition from the troubadours through Dante and Petrarch, and even to Sir Thomas Wyatt and Shakespeare. My poems both participate in and question the tradition, calling attention to its gendered imbalances (the man is often the pining lover who speaks and writes, and the woman is the silent object of desire). In one part of the book, then, women speakers get to be the troubadours and sing their own songs, and I translate a few poems by Gaspara Stampa, a Venetian Renaissance poet who wrote a sequence in the style of Petrarch. I also dedicate a sonnet sequence, “Courtly Love,” to 1990s grunge rocker Courtney Love, while I explore her roles as object of desire, performer, mother, feminist, and active lover herself. Other sections of the book challenge the imbalances of courtly love by demonstrating mutual love and by interrogating the experience of illness (used metaphorically in courtly love), sometimes through the lens of faith. The two poems published by Image come from this section.

As I look forward to the next writing project, including the few new poems I’ve written recently, I think it will be a meditation on Tragedy and tragedies, but there’s much to be fleshed out about that, much to be written.