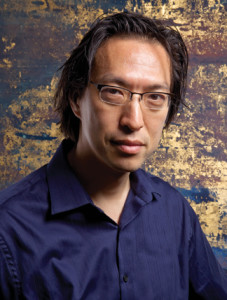 Noted artist and critic Robert Kushner has written: “The idea of forging a new kind of art, about hope, healing, redemption, refuge, while maintaining visual sophistication and intellectual integrity is a growing movement, one which finds Makoto Fujimura’s work at the vanguard.” Mako Fujimura is forging a new kind of art not just through his work, but with his life. An internationally renowned painter, he is also a deeply generous spirit, as dedicated to the welfare of his communitie—the art community, his church, his neighborhood—as he is in the purity and integrity of his craft. At once rich and spare, his work is in the Nihonga tradition, a form dating back to medieval Japan and emphasizing the beauty of materials— gold leaf and finely ground mineral pigments. His art, while largely abstract, is never remote or cold. Rather, it always brushes against the edge of mystery, inviting us in, asking us to trust that there is order behind chaos, grace behind pain.

Some of his work is featured in Image issue 32 as well as issue 67 and issue 80.  Read his essay “From Culture War to Culture Care” here. 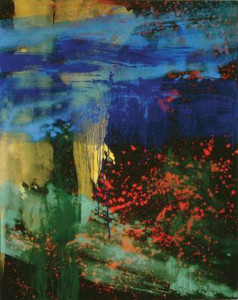 Makoto Fujimura was born in 1960 in Boston, Massachusetts. Educated bi-culturally between the U.S. and Japan, Fujimura graduated from Bucknell University in 1983, and received an M.F.A. from Tokyo National University of Fine Arts and Music with a Japanese Governmental Scholarship in 1989. His thesis painting was purchased by the university and he was invited to study in the Japanese painting doctorate program, a first for an outsider to this prestigious traditional program. 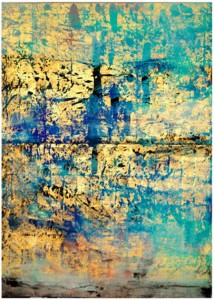 It was during the six and a half years of studying in Japan that Fujimura began to assimilate the combinations of abstract expressionism explored in the U.S. with the traditional Japanese art of Nihonga. Upon his return to the U.S., he began to exhibit his paintings in New York City, while continuing to show in Tokyo, and was honored in 1992 as the youngest artist ever to have had a piece acquired by Museum of Contemporary Art, Tokyo.

After twenty years as a successful artist in Japan and the U.S., Fujimura has become a voice of bi-cultural authority on the nature and cultural assessment of beauty, by both creating it and exploring its forms. His paintings address the creative process and explore what it means to see. The work moves the observer from cognitive categorization to visceral experience.

In 1990, Fujimura founded The International Arts Movement. With Image, IAM co-hosted a major conference in New York City on “The Return of Beauty” in November of 2002.

As an artist working from his studio near Ground Zero until the 9/11 terrorist attacks in New York City, Fujimura was deeply affected by the tragic events of that day. But his art continues to speak of hope even in darkness, and the deeper reconsideration of life’s meaning. As an artist who travels widely, Fujimura recognizes the momentous changes the world is experiencing since those events, and the role of art in enabling people to reflect deeply, explore their feelings and become more profoundly aware. Some have experienced change for the better due to this awareness. In this regard he notes, “my work constitutes one of many voices calling for change, and I am increasingly hopeful as I observe evidence that we are all in a larger process of re-examining ourselves.”

Most recently, Fujimura’s work, Gravity and Grace, a collection of paintings formed of carefully stone-ground minerals including azurite, malachite and cinnabar, has been showcased at the Bellas Artes Gallery in Santa Fe, NM. His works can also be seen at Dillon Gallery in Oyster Bay, NY as well as Kristen Frederickson Contemporary Art in New York City. Public collections include The Saint Louis Museum, Museum of Contemporary Art in Tokyo and the Time Warner/ AOL/ CNN building in Hong Kong. He was appointed to the National Council on the Arts in 2003.

I’ve recently finished a series of new paintings, Splendor, done in 2003 and 2004 as an intuitive visual response to T.S. Eliot’s Four Quartets. I wanted to focus on a specific area of the medium of Nihonga, using minerals on Kumohada (heavy Japanese rag) paper. When the grainy pigments are layered on a surface, the medium (hide glue) binds the pigments to refract color. I wanted to develop a series of paintings that transcend color categorization, highlighting attributes of each grain of pigment. The Splendor series remains semi-abstract, but evokes a greater presence of the medium and the “inner scape” I have been developing in my works. 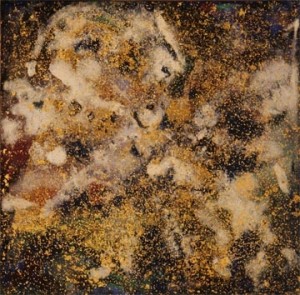 The Butterfly of the Beautiful. Mineral pigments, gold on kumohada. 6 x 6 inches.

In a world increasingly dominated by facile imagery, I aim to create images that harken back to the original meaning of the word “medium,” a word that used to connote the presence of the Spirit. To me, the Holy Ghost is the true medium for any human expression. Our lives are the artworks of the Spirit, and our art can flow directly out of this relationship. Making the Splendor paintings involved acceptance of the slow evolution of imagery made possible through the technique of Nihonga, which has developed in Japan since medieval times.

The paintings will be on display at the Kristen Frederickson Contemporary Art in New York this fall along with an installation called Nagasaki Koi. Koi uses video from a pond in Nagasaki, not far from where the second atomic explosion took place. In the video, I was taken with the enormity of such beautiful shapes, their seductive and erotic forms. They seem dragon-like, even mutated, their forms evoking the horror and power that forever etch the Ground Zeros of the world. I slowed the video down considerably, and reversed it. Out of these images came many sketches done in watercolor, the Splendor paintings, and video pieces. At the current exhibit, boat-like containers will house the small monitors, hidden behind thin sheets of mulberry paper, creating a meditative “catacomb of hope” in the basement Project Room of the gallery.

A full-color catalog is available at www.makotofujimura.com