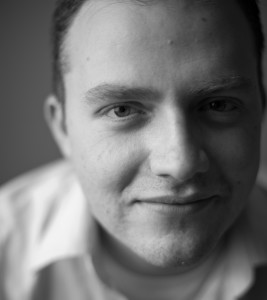 Mario Chard is a poet of borderlands. His poetic obsession is with Tierra del Fuego, the Patagonian island of fire and ice, a landscape he says reflects his love in in-between things and places. In his taut, compressed poems he embraces contradiction and contrast, even revels in it: between sleep and waking, dark and light, machismo and hesitation, immigrant and American identity. For Chard, the child of an Argentine mother and American father, landscape offers a poetic means of comprehending diverse and complex histories and values, and of navigating among them. In his work, landscape operates in a way that is almost mystical, offering us realms where we go to be tested and transformed. Through language that surprises and delights, with an unhurried step, he invites us into wonderful and strange country.

Some of Chard’s work is in Image issue 80. Read here.

Mario Chard was raised in northern Utah. His poems appear in the Beloit Poetry Journal,Boston Review, Colorado Review, Image, Indiana Review, Third Coast, and Western Humanities Review, among other journals. He is a graduate of the MFA Program in Creative Writing at Purdue University where he served as the poetry editor of Sycamore Review. A winner of the 2012 “Discovery” / Boston Review Poetry Contest, he recently completed a Wallace Stegner Fellowship in Poetry at Stanford University. He lives in Utah with his wife and two sons.

I’m still at work on my first book, Land of Fire, which is complete in one version and my eternalLeaves of Grass in another. The title is a literal translation of Tierra del Fuego, the Patagonian island severed from the rest of South America by the Strait of Magellan and named by the explorer himself. Tierra del Fuego is the only land I know where the first lines of Frost’s great poem are equally true: “Some say the world will end in fire, / Some say in ice.” Here at the world’s ending is a land of ice named after fire, an island defined by its contradictions. As the son of an Argentine immigrant and an American father, born already a contrast of culture, I have always been interested in patterns and histories of loss that stem from borderlands, lands cast down, and lands forgotten. So although nearly all the poems in the collection follow three increasingly tangled threads–a contemporary immigrant narrative, the echo of the fallen from Paradise Lost, the anxiety of what gets passed on from parent to child–all are spoken from a land of fire, which is really any land we’re privileged to ignore for its distance, like the sun, like Pandemonium, like wars outside our borders or within.

But although the landscape of my work may be a land of fire and contradiction, the heart of my work is machismo, its burden and inheritance. Ultimately I want to speak to the central flaw of machismo: the way a man’s appropriation and abuse of power will always strip him of the kind of loyalty that makes power last. My hope is that these poems appearing in Image and many that anchor the book are seen as images of that flaw. I believe their forms are derived from the way a flaw creates repetition, like a boulder disrupting water in a stream. The division of my heritage has given me a border from which to speak, but it is not the only border. It is this fracture that pervades my work, though an expression of fracture is not my work’s only goal. Eventually the boulder’s disruption of water is erased by that water. My goal–like many others–is to not forget the flaw.