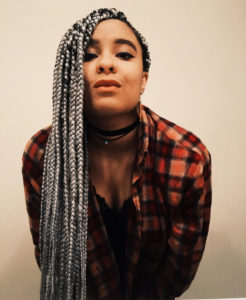 Natasha Oladokun is a poet practiced in distinctions. Articulating the inchoate with precision, Oladokun often writes about the body: its history, myths, and relationships. Considering a painting of Christ depicted as white, Oladokun gestures towards the slippage in the image of the body: “Still, life in portraiture may smuggle truth, / if truth is where the bread invites the knife.” Her poems bristle with the most taut extensions of language: lozenges leave an “artificial tang lacing the tongue,” the sky becomes “a fistful of hoarstruck hair,” and piano movements are compared to “oneiric assemblace of sea salt ivory:” (the poem continues with “you played me,” and the sensuality of admission after the sudden colon invites us back from image to form). Oladokun is a poet of embodiment. Considering attention—in one poem: “What are we if not vowels of thirst—” Oladokun examines attention as desire’s distortion, recalling a white man (compared to an “elephant / in a crowded bar”) who grabs her hair while claiming admiration; and in other poems, desire’s hope of intimacy and confession, such as the desire for a partner that becomes a sound: “all calling back same sound, symphonic yes and amen.” Desire, in Oladokun’s poetry, considers the body as wanted and feared, and the body’s history as presented and elided: think carefully what you call love, Oladokun seems to warn us. Consider carefully the “default / condition: each of us versions of the other’s own making.” Profound and particular, Oladokun’s poetry attends to the world without hesitancy, leaving us to listen to the echoes of her questions about who we are and where we come from: “This, the ocean’s rustled babble— / was it the first sound the first / woman heard as she was cut / out of another body’s desire.”

You can read two of Natasha’s poems in Issue 93: “Dark Talent” and “Glossolalia.” A new poem is forthcoming in Issue 95.

Natasha Oladokun is a Cave Canem fellow, poet, and essayist. Her work has appeared or is forthcoming in the American Poetry Review, Harvard Review Online, Pleiades, Kenyon Review Online, Indie Film Minute, and elsewhere. She is Assistant Poetry Editor at storySouth, and is currently a Visiting Assistant Professor of English at Hollins University, her MFA alma mater.

I’m working on my first poetry manuscript, which has no title as of right now. That’s not necessarily a problem, of course; there’s just something strange to me about making and loving something that won’t yet tell me its name. But that’s one of the paradoxes of poetry, in general, that I find so intriguing. It gives us ways to find names for the ineffable, to make language for that which escapes us but won’t let us go.

My theory I’ve been playing with lately is this: all poems are love poems, and all poems are prayer requests. The poems in my manuscript have been testing this idea in different ways, partly in terms of how they voice and respond to spiritual and erotic longing, loneliness, and geographic isolation. For me, the concept of “home” is pretty fraught. Throughout my life I’ve moved frequently throughout rural Virginia, and have become increasingly aware of my own alienation in, and toward, the land here and throughout the rest of America. My poems lately have been responding to this sense of disillusionment—it’s hard to see the beauty of the landscape where I live as much more than a scrim foregrounding ghosts that few can see, or feel. And it’s hard to do all this while knowing acutely, daily in my own body, how much this land’s history continues to be hostile to Black bodies and lives.

Most of my poems respond to absence and loss of some kind. I think this will continue to be true in my work, for the time being. So in the meantime I’ve been asking myself two questions: how might poems of grief and desire faithfully bear witness to reality, while also moving toward life? What might tenderness look like in my own poems, as an act of political dissent and personal generosity? If at least part of poetry’s key work is to nurture imaginative power in a world that seeks to strip us of it, then poetry is also a reminder that our longing is not wasted, and that a life marked by pain is still much more than that.