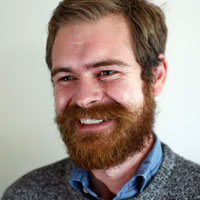 Nathan Poole’s is a contemporary southern voice that feels at once strange and familiar. His prose has a generous lyricism, an unapologetic love of beauty, and an unhurried pacing that feel classically southern, but a style and freshness that are his own. His writing about the land (often his home state of South Carolina) inherits the modern conservation movement; in his fiction, nature is not only a metaphor for a character’s inner world, but a thing in itself, a thing often at risk, whose story is intertwined with the stories of people. Poole’s fiction also has great emotional depth; he most often writes about family loss and reconciliation. Simple, powerful emotion is rendered with clarity and allowed to unfold slowly and fully, revealing its nuance. In “A Map of the Watershed,” the onset of the main character’s dementia is rendered heartbreakingly but with dignity and, surprisingly, with great beauty. Poole is young, but he feels like an old-fashioned writer, a sort of throw-back to an earlier and more patient generation (Eudora Welty is a clear antecedent). He seems a bit old-fashioned in person, too—gentlemanly, soft-spoken, and unfailingly modest. We’re proud to claim him as a former Milton Fellow at Image, and we watch his continuing success with great pleasure.

Some of Poole’s work can be found in Image issue 81. Read here.

Nathan Poole’s first story collection was awarded the 2013 Mary McCarthy Prize in Short Fiction by Edith Pearlman and was published this year by Sarabande Books. He has also been awarded the 2012 Narrative Prize, nominated for a Pushcart Prize, and short listed in the 2013 Best American Short Stories Anthology. His work has appeared or is forthcoming from various journals, including Narrative Magazine, The Kenyon Review, Orion, The Chattahoochee Review, Image, The Four Way Review, Nat.Brut Quarterly, The Lumiere Reader, and other journals. He holds degrees from The University of South Carolina and the MFA program at Warren Wilson College. During this academic year, he serves as the Joan Beebe Fellow in Creative Writing at Warren Wilson College in Asheville, NC.

I’m currently moving in two new and very different trajectories as a writer. The first is a historical novel set in the Cowasee Basin of South Carolina, home to one of the last old-growth bottom land forests in the world. It is a place of both exploitation and sanctuary, and I’m endlessly inspired by it. I usually discover that my themes in fiction do not change; as with my first story collection, I’m obsessed with marginalized characters and the restoration of relationships; I also love characters that are isolated in someway and so maintain a kind of fierce internality. The lyrical confluence that wells up inside such characters is powerful in fiction and I do my best to take advantage of it. I also find landscape to be, as Eudora Welty once said, “the ground conductor of all the currents of emotion and belief.” The more specific the place, the more resonant and meaning the action. It is not as simple as foreground and background. Place is not a theater, or a setting. The kind of place I have in mind is about identity; of course this has become a trope lately, a sentiment. But what can I do about that? For the novel specifically, I want the landscape to act as the primal antecedent to the actions of the book, I want it to have a sense of agency, to exert a psychological force on the characters, encompassing them while transcending them in time.

The second project is a poetry manuscript. As I’ve been doing the research and plotting necessary to get a historical novel in motion, I’ve needed an outlet for my more basic love of metaphor, a place to practice the potentialities of language in a less discursive way. I was part of a reading group in Columbia, South Carolina, and all we read was poetry and we met every week for two years to read and talk about it. That was a necessary part of my education in letters I think. Something about being forced to keep looking at the poem, long after you would put it down if you were by yourself, was revolutionary for me. Over that time I developed a newly invigorated love for the suggestiveness and musicality of poetry. At the same time this was happening my wife and I got a dog, a very active dog. I suddenly found myself spending lots of time walking this dog with nothing on my mind, just tromping around in the woods down by the river from our house in Columbia, wherever I could go to let the dog run without bothering too many people. On those walks I found my mind had begun to wander toward a poetic shape—a sonnet shape, Petrarchan, to be exact. I would see an image and capture it and then draft for myself a little response, almost without being aware that this was what I was doing. After we moved to Seattle for the Milton Fellowship, I also found I had lots of time alone, in isolation, and I found myself doing this same thing. Eventually you have to write those things down or you’ll start to feel heavy, a little crazy. Whether anything will come of this, I don’t know, but I’m interested now in taking it all a bit more seriously and dedicating more time to crafting poems.