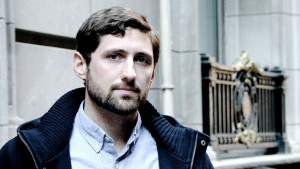 In our time, if you don’t know someone in the service, military life can feel curtained off from the rest of us. Phil Klay offers a generous window into that world, and into the consequences of our nation’s military presence in the Middle East, both for the people who live there and for the ordinary Americans who serve. Upon graduating from Dartmouth in 2005, Phil Klay was commissioned as a second lieutenant in the US Marine Corps. He was deployed to Iraq during the 2007 troop surge and served as a public affairs officer in Anbar Province. After leaving the Corps, he completed an MFA in fiction at Hunter College. His debut collection of stories, Redeployment, was awarded the 2014 National Book Award for fiction. Narrated with speed, compression, and a mix of humor and pathos, the stories are rich in observations of the psychology of people under extreme stress, genuine courage, genuine stupidity, brutality, and the ironies created by military bureaucracy. Klay, who is the product of a Jesuit education, continually brings them back to the overwhelming moral weight of choices made in war. In his Image interview with Nick Ripatrazone, he says, “Putting the story on the page is a product of doubt, not a product of certainty. I write because I’m troubled or confused or fascinated by something in human experience I don’t understand, and writing allows me a way to expose my own ignorance further. For me, a story begins with questions far more often than with answers.”

Phil Klay is a graduate of Dartmouth College and a veteran of the U.S. Marine Corps. He served in Iraq’s Anbar Province from January 2007 to February 2008 as a Public Affairs Officer. After being discharged he went to Hunter College and received an MFA. His story “Redeployment” was originally published in Granta and is included in Fire and Forget: Short Stories from the Long War. His writing has appeared in The New York Times, Washington Post, Wall Street Journal, Newsweek, Granta, Tin House, and elsewhere.

In 2014 Klay’s short story collection Redeployment won the National Book Award for Fiction.  He was also shortlisted for  the Frank O’Connor Prize and named a National Book Foundation ’5 Under 35′ honoree. In 2015 he received the Marine Corps Heritage Foundations James Webb award for fiction dealing with U.S. Marines or Marine Corps life, the National Book Critics’ Circle John Leonard Award for best debut work in any genre, the American Library Association’s W. Y. Boyd Literary Award for Excellence in Military Fiction, the Chautauqua Prize, and the 2015 Warwick Prize for Writing.

I just finished a long essay for the Brookings Institution called The Citizen-Soldier: Moral Risk and the Modern Military, which came about as I tried to think through what it means for me, morally, to be both a veteran of a war that has resulted in so much suffering and a citizen in a country that regularly uses military force. I ended up writing about my personal experience, about the Revolutionary War and the formation of the American Army, about medieval Christian understandings of the act of killing in war, about contemporary veterans and their responses to the tragedy overseas.

I’m currently working on a novel about the U.S. involvement in Colombia, which is a subject I’ve been fascinated by for a long time, and which I think tells us a lot about how the United States projects power (or tries to) throughout the world. The US has long judged Colombia critical to US national interest, though the rationale has shifted over time from the war on communism to the war on drugs to the war on terror. Outside of the Middle East, Pakistan and Afghanistan, Colombia is the largest recipient of US military aid, there’s been a long term training mission there, and many of the ways that we now use special operations have been applied to Colombia.  William Wood, who was the U.S. ambassador to Colombia from 2003 to 2007 and then sent to be ambassador to Afghanistan in 2009, said, “There is no country, including Afghanistan, where we had more going on.” It’s not much talked about, though. I think it’s a fascinating example of how our use of the military has shifted, alongside other types of aid. There’s also currently a complicated and fascinating debate going on in the county about the peace process now happening with the FARC which raises a lot of interesting moral questions about post-conflict resolution. I’ve been interviewing people who spent time there, and I just finished spending a couple of weeks down in Colombia interviewing folks, as well as seeing some of my in-laws. It’s difficult to talk about the shape of the novel right now, I’m still very much in the thick of it, but it’s been a pretty remarkable process for me so far. I hope it turns out well.