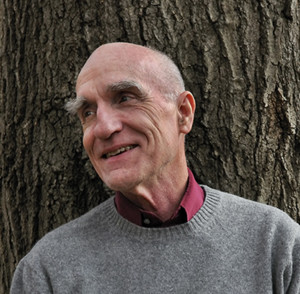 In genres as diverse as short story and memoir, nature essay and manifesto, Scott Russell Sanders’s prose is consistently propelled by a concern for the well-being of the world and the people who inhabit it. And whether he is describing the distinctive beauty of his southern Indiana hometown or the resilience of a wounded twenty-something fleeing her past, this love for his subjects is contagious, exerting an undeniable pull on the reader’s life. But if Sanders’s writing makes demands of his readers, nudging us to attend to our environment and to each other, it also offers a great deal unconditionally. The short story “Waterfall” from Image issue 64, in which characters both sinful and sinned against are offered forgiveness before anything is demanded in return, is emblematic of the almost gratuitous sense of hope that permeates even Sanders’s darkest pieces. While his fiction and nonfiction relentlessly confront our tendency as human beings to perpetuate sin and destruction on each other and our world, Sanders offers a vote of confidence in our capacity for change. Backed by this generous hope, his writing, though it bears a prophetic weight, is buoyed by a quality that can only be called grace.

Some of Sanders’ work is featured in Image issue 53, issue 64, and issue 85. Read an excerpt by Sanders here.

Born in Tennessee and reared in Ohio, Scott Russell Sanders studied at Brown University and earned his Ph.D. from the University of Cambridge as a Marshall Scholar.  In 1971 he joined the faculty of Indiana University, where he taught until 2009, retiring as Distinguished Professor of English.  Among his twenty books are novels, collections of stories, and works of personal nonfiction, including Staying Put (1993),Writing from the Center (1995), and Hunting for Hope (1998).  His memoir, A Private History of Awe (2006), was nominated for a Pulitzer Prize.  His latest book is A Conservationist Manifesto (2009), which envisions a shift from a culture based on consumption to one based on caretaking.  Sanders has won the AWP Creative Nonfiction Award, the John Burroughs Essay Award, the Lannan Literary Award, the Indiana Humanities Award, and the Mark Twain Award.  His writing has been supported by the Lilly Endowment, the Indiana Arts Commission, the National Endowment for the Arts, and the Guggenheim Foundation.  His work has appeared in such magazines as Orion, Audubon, and Georgia Review, and it has been reprinted in The Art of the Essay, The Norton Reader, and more than fifty other anthologies, including the annual Best American Essays.  In his writing he is concerned with our place in nature, the practice of community, the relationship between culture and geography, and the search for a spiritual path.  He and his wife, Ruth, a biochemist, have reared two children in their hometown of Bloomington in the hardwood hill country of Indiana’s White River Valley.

I’m currently working on three book projects.  One is a novel-in-stories that explores relationships between human love and landscape, my first return to fiction after nearly two decades of writing nonfiction.  Six out of a projected ten stories in this book have appeared in magazines, including “Waterfall,” in the Winter 2009-2010 issue of Image.  In a second project, I am revising and gathering into a book some fifteen stories that were published in magazines during the 1980s.  They are speculative, sometimes fantastic tales that examine our ways of inhabiting the planet and our place in the natural order.  The third book, still in the note-making stage, will explore the meaning of “wealth”—as it is presently understood in our culture, as it has been understood in other cultures and ages, and as it might be re-conceived if we are to create a more just, compassionate, and ecologically sound society.  In reflecting on what makes for well-being—which is the root meaning of “wealth”—I will be pursuing ideas and concerns that I have explored in previous books, especially Staying Put, Hunting for Hope, and A Conservationist Manifesto.  Alongside these three large projects, I continue to write essays provoked by experiences that have stirred or puzzled or intrigued me.  One recent example of such work is “Mind in the Forest,” which appeared in the November/December 2009 issue of Orion.  At some point, I may add a few of these essays to what I regard as the strongest work from my nine previous books of nonfiction, and assemble a volume of New and Selected Essays.  Anyone who has followed my work will see that I have been brooding for decades on the fate of the Earth; on the suffering we inflict on ourselves, our neighbors, and our fellow species; and on the sources of healing and renewal, especially within nature and spirit.  I’ll brood on those matters as long as I live, but these days I feel the need to remind myself—and my readers—of our capacity for kindness, imagination, playfulness, and joy.  So in my current work, I bear in mind the shadows but turn to the light.