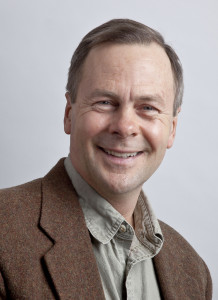 Lisa Russ Spaar observed in a recent review in Image that the speakers in Stephen Cushman’s poems seem to do a lot of walking—beside creeks and oceans, up and down mountains, across continents. “Because Cushman’s travelers don’t miss much,” she writes, “the poems, accessible as they are, never shirk complexity…. They are so exceptionally well-constructed that they almost beg to be memorized.” His work explores what he calls “the ordination in the ordinary”—the sacredness of the everyday—not merely through his subject matter (weather, hair, argument, illness; also war, love, and death), but through the language itself. He seems intent on widening the bridge between plain, economical daily speech and the language we use to talk about transcendent beauties and truths. Often his poems begin in a brisk, businesslike voice, concise and frankly comic. (He makes playful use of formal elements, especially rhyme, rhythm, and etymologies.) Having laid down the meter, he suddenly riffs into a looser, more expansive lyrical mode. Then back. Then both at once. He circles a thought, expands the circle, then pounces. Spaar writes, “Cushman is a poet of intelligent, vernacular faith, humility, humor (a rare mix in contemporary poetry), who walks his talk, and talks his walk, wisely.” An ideal walking companion, Cushman uses a decidedly modern voice to explore the most ancient of questions.

Some of Cushman’s work is featured in Image issue 74 and issue 83. Read a poem by Cushman here.

Stephen Cushman was born in Norwalk, Connecticut, and grew up in the Northeast. In 1982, he moved to Charlottesville, Virginia, and began teaching at the University of Virginia, where he is Robert C. Taylor, Professor of English. He has published four collections of poetry: Blue Pajamas (LSU), Cussing Lesson (LSU), Heart Island (David Robert), and Riffraff (LSU). He also has published two works of criticism, William Carlos Williams and the Meanings of Measure (Yale) and Fictions of Form in American Poetry (Princeton), as well as a book on the Civil War, Bloody Promenade (Virginia). He is general editor of the fourth edition of thePrinceton Encyclopedia of Poetry and Poetics, published in 2012.

Poems are like prayers in many ways: one way we often take for granted is that we like them both short. Brevity is power, whether it be in Solomon’s prayer for a discerning mind, Psalm 131, The Lord’s Prayer, the prayer in Gethsemane, the haikus of Bashō, the lightning bolts of Dickinson, or The Really Short Poems of A. R. Ammons. Of course. But we also have been told to pray without ceasing, and ceaseless prayer doesn’t necessarily make for short prayer.

After writing four books of short poems–of the kind usually described as lyrics and usually characterized by brevity that aims at or displays a variety of strategies for effective, memorable closure–I found myself in circumstances and conditions that had killed my appetite for effective, memorable closure. So I set myself the task, which ended up taking from August of 2011 through May of 2012, of writing without ceasing, without aiming for effective, memorable closures. The result has been a book called The Red List, which is another name for the Endangered Species List. It begins, “Endangerment’s foreplay en route to extinction / often but not always.” It’s about endangerment of many kinds, whether among birds, animals, or humans. I’m not sure whether The Red List is a long poem or a series of short ones, and I’m not sure if it matters, at least to me. After I sent this book off, I turned back to short forms. But after producing a few of those, I returned this fall to writing without ceasing. The lengthening product carries the working title “Hothead.” As was the case with The Red List, I don’t know in advance where it’s going, and I don’t know how long it will last.