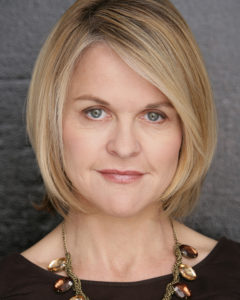 As more than one wag has said (while probably wagging her finger), comedy is serious business. In fact, comedy always seems more harrowing and difficult to pull off than drama; our comedy detectors are very finely tuned and when a comic line falls flat it really goes thunk. So we’re always amazed when someone seems to have the gift, as Susan Isaacs clearly does. Even more astonishing is that Susan is one of the few comedians to have found a way to talk about religious faith in a way that is simultaneously funny and brutally honest. She began one reading from her book, Angry Conversations with God: “An author says that our relationship with God is nothing short of a marriage. When I read that, I thought: ‘In that case, God and I need to go to marriage counseling. Cuz we are not getting along.’” Keep an eye out for Susan: you’ll find her popping up on episodes of Parks and Recreation, Blackish, Veep, and beyond.

Read Susan’s essay on how the film The Millions changed her life from our film issue here.

Susan Isaacs is an actor and writer with many credits in TV and film, including Planes Trains & Automobiles, Scrooged, Seinfeld, Veep, recurring roles on Parks & Recreation, as well as the upcoming Blackish spinoff, College-ish. She is an alumna of The Groundlings Sunday Company, and started King Baby Comedy in New York with Tony Hale and Jeannie Gaffigan.

She earned an MFA in screenwriting from USC and has taught screenwriting and sketch comedy at the undergraduate and graduate levels. Her debut memoir, Angry Conversations With God, was named a top-ten religion book of the year by Publisher’s Weekly and Relevant magazines. She toured with author Donald Miller and adapted the book into a solo show, winning the Best Adaptation Award at the United Solo Theater Festival in 2015.

Susan has been a guest on CNN’s “Faces of Faith” and Fox’s “Red Eye With Tom Shillue.” She’s taught screenwriting and sketch comedy at Azusa Pacific and Pepperdine universities. Also, she saw the original Broadway cast of Hamilton! Don’t hate her.

After my first memoir, Angry Conversations With God, was released, I taught screenwriting and sketch comedy for seven years. I loved working with students—especially on the annual SNL style comedy show I directed and produced. That was some of the most fun I’ve had in my life—watching kids find their comedic voice and take risks in their writing and performing. The downside was that adjunct teaching was a minimum wage job and used up all my creative energy. In the seven years I taught, I didn’t get another book completed.

I did a solo show based on the memoir. It started out as a 35-minute standup act, but I kept retooling and adding production value to it. Now it’s a 90-minute fully staged show. Angry Conversations won an award at the United Solo Theater Festival in New York in 2015; the Fire Exit Theater in Calgary, Alberta brought me up last year to do the show for a week. However, I knew if I didn’t create new material I could end up like Wayne Newton, doing the same three songs at some desert casino for the rest of my life.

I stopped teaching and went back to writing. This past year I got to write with Steve Taylor on a TV pilot he’s been developing; that’s been a huge privilege and a blast. I’m also working on a new memoir about my late-in-life search for a husband. I’d spent 20 years focused on God and career, until I woke up with a David Byrne “my God, what have I done?!” moment. So I chronicle my search for a husband and all the ignominious steps I took in that pursuit. I also talk about all the good and bad advice I received from the church and the world about singleness, sex, and marriage.

As for acting, I appeared on Veep and Black-ish this past year. The latter was a backdoor pilot for a spinoff, College-ish, and it got picked up for a 2018 debut. So hopefully you’ll see me more of me next year working opposite Matt Walsh and Chris Parnell.

Not all art has its value in making a living. I think it’s good for the soul to practice other forms of art, just for the sake of doing it. After dealing with words all day, I need to do something nonverbal. I love to sew with recycled, felted wool. Maybe it’s a Crafty Girl thing, maybe it’s ADHD. Maybe it’s what I call Seasonal Craft Disorder, because I get obsessed in the winter months. I started off making felted flower pins, then moved to useful art objects like iPhone covers. Now I’m making tea cozies. The amount of time I put into them, they’re not worth selling unless some gallery takes me on. I’m just self-disclosing on behalf of all the artists out there. Don’t be ashamed. At least you’re not sewing clothes for pet chickens. And if you are, well more power to ya.