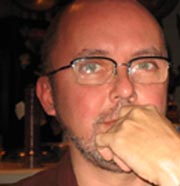 Like a Zen archer, poet Theodore Worozbyt is as skillful as he is serene. In language precise and apparently effortless, at once conversational and elegant, his poems offer meditative exercises that ebb and flow with an organic rhythm, by turns placid and stormy. Worozbyt is a master of mood. Line by line, stillness deepens, or a sense of threat builds. He writes of family, place, season, of lives lived between two cultures, and with an ear for the beauties manifest in the idiomatic rhythms of common speech. He possesses a keen, unsentimental sense of the past, documenting both its ugliness and its beauty with deftness and care. With respect to the dead, his poems sometimes approach magic realism in their literal sense of a world beyond—or you could call it faith.

Some of Worozbyt’s work is featured in Image issue 50 and issue 67. Read a poem by Worozbyt here.

Theodore Worozbyt has received grants from the NEA, and the Georgia and Alabama Councils for the Arts. He holds an MFA in Poetry and a Ph.D. in American and British Romantic literature from The University of Alabama, where he teaches. His poetry has recently appeared or is forthcoming in Alice Blue, 42opus, American Poetry Journal, The Bedside Guide to No Tell Motel, Crazyhorse, Faultline, Hotel Amerika, kaleidowhirl, Kulture Vulture, Mississippi Review Online, New England Review, National Poetry Review, North American Review, Passages North, The Southern Review and Verse Daily. A critical essay, “Watermarks,” will appear in Questions: for Derrida , from SUNY Press. His chapbook, A Unified Theory of Light, is currently out from Dream Horse Press, and his first full-length collection, The Dauber Wings, winner of the first American Poetry Journal Book Prize, is now available for purchase.

“At the moment I am writing mostly prose poems. This year I’ll be putting the finish on a book of them called Letters of Transit. I also have a growing group of new poems that are starting to feel like a manuscript, but I don’t yet have a working title. Writing prose poems—the sensibility of that—has begun to influence my verse and I am interested to see how that crossover pans out for me compositionally. Also, too, some of the prose poems have grown, are growing into narratives that I would call short shorts. And since those seem to be linking themselves together in ways, I am considering the possibility that I might be writing a novel.”