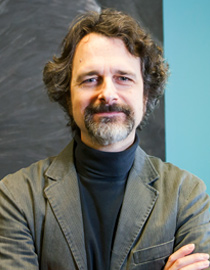 Tim Lowly is a Chicago-based painter whose lyrical realism and quiet spirituality have given his work a national reputation. While he has painted myriad subjects, from everyday life on American city streets to village life in South Korea, one series of Lowly’s paintings have etched themselves on the minds of his many admirers — his portraits of his daughter. Temma is multiply impaired — she has a seizure disorder and cortical blindness — and the paintings make us look at the things we train ourselves to avoid seeing: the problems of the body, and the problem of inexplicable suffering of innocents. 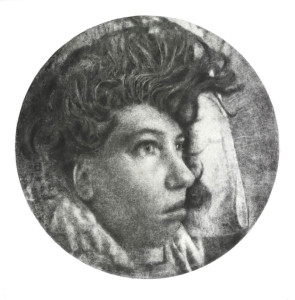 Spinning, 2011, acrylic and ink on paper, image is one meter in diameter

But as we look more closely, the portraits call even our notions about suffering into question. Though tender, the images are also startlingly realistic. They don’t flinch from Temma’s condition, but rather than lamenting her, they do a sort of visual theodicy, giving us glimpses of meaning in something we tend to think of as being only senseless and painful. Lowly’s vision, while meditative in style, reminds us that compassion is not the same as pity — rather, compassion is learning to “suffer with” another and to receive, in turn, something inexplicable and grace-filled from the one who suffers.

Tim Grubbs Lowly was born in Hendersonville, North Carolina in 1958. The son of medical missionaries, he spent most of his youth in South Korea. He attended Calvin College and received a BFA degree in 1981. His wife Sherrie Rubingh Lowly is a United Methodist Pastor. They reside in Chicago, Illinois. Since 1994 Tim has been affiliated with North Park University in Chicago as gallery director, instructor, and artist-in-residence. Currently Tim is preparing for his fourth one-person exhibition with Lyons Wier Gallery in Chicago.

You can find out more about Tim’s work at his official website.

“Among other things I am working on an on-going series of paintings of couch pictures. A woman, a child. What you see, what you don’t see. These images get at something important for me. (The images — In Extasis, Tend, and See — are from the “couch picture” series.)”