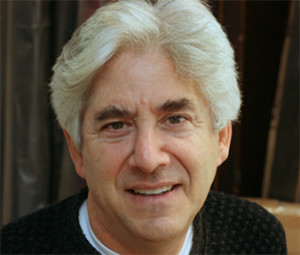 According to the art critic Dore Ashton, Tobi Kahn’s art “unites our perception of the material with our memory.” This is only fitting for a man whose Jewish heritage permeates all aspects of his work. Whether in his mysterious paintings, reminiscent of biological and geographical formations, or in his sculptures of sanctuaries and sacred monumental pieces, or in the design of furniture and ambient space for a hospital meditation room, Kahn’s work draws us into meditation. As Ted Prescott puts it, Kahn’s art causes us to dip into the “deep wells within us where longing and memory intermingle.” The Philadelphia Inquirer calls his work “perfectly balanced between extremes of abstract and representational…. having an uneasy mixture of authority and idiosyncrasy—and sometimes just a bit beyond human reach.”

Some of Kahn’s work is featured in Image issue 33.

Tobi Kahn is internationally acclaimed as a painter and sculptor. His work has been shown in over 40 solo exhibitions and over 60 museum and group shows since he was selected as one of nine artists to be included in the 1985 Guggenheim Museum exhibition, New Horizons in American Art. Kahn’s paintings and sculpture have been the subject of an extensive bibliography in art magazines, catalogues and newspapers since the early 1980s. 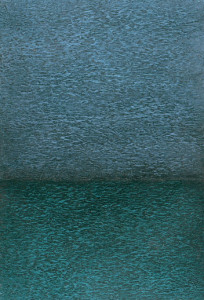 A museum exhibition of over a decade of his work, Tobi Kahn: Metamorphoses, curated by Peter Selz, traveled to eight museums from 1997 through 1999, including the Weatherspoon Museum, Greensboro, and the Museum of Fine Arts, Houston. An 84-page illustrated catalogue of the exhibition includes essays by Dore Ashton, Michael Brenson and Peter Selz (University of Washington Press).

Kahn’s commissioned outdoor sculpture includes Shalev, for Jane Owen and the Robert Lee Blaffer Trust, New Harmony, IN; and two Holocaust memorial gardens, in Tenafly, NJ, and La Jolla, CA. His commissioned installations include Eyda, seven paintings for Mitchell and Company, Boston, MA; and The Twelve Tribes and Creation of the World, for the Jewish Family Congregation, South Salem, NY, through a Nathan Cummings Foundation grant; as well as numerous private commissions.

In March 1999, Avoda: Objects of the Spirit, an exhibition of Kahn’s ceremonial objects curated by Laura Kruger, opened at Hebrew Union College, NY, and will travel for five years. Other Judaica commissions include the Museum of Jewish Heritage, Battery Park City, NY.

In December 1999, Kahn designed an installation of nine “Sky and Water” paintings for the Albright-Knox Art Gallery’s Landscape at the Millennium exhibition, curated by Douglas Dreishpoon.

In November 2000, a solo exhibition of Kahn’s paintings and works on paper, curated by Mark White, opened at the Edwin A. Ulrich Museum of Art. It will travel to four other venues. The exhibition will include a catalogue, Metaphor and Transport: Tobi Kahn and the Aerial View.

In May 2000, Kahn received the Outstanding Achievement Award in fine art as an alumnus of Pratt Institute. In March 2001, Heads, a solo exhibition of Kahn’s early work, opened at Pratt, curated by Peter Selz and accompanied by a catalogue.

Kahn’s handmade toys have been included in museum shows across the country. He has also designed sculpture sets for theater productions, including Jonah and The Song of Songs, both by composer Elizabeth Swados, and for work by choreographers Gus Solomons and Muna Tseng.

In November 2001, a meditative room created by Kahn was inaugurated as a permanent installation at the HealthCare Chaplaincy in New York City.

Kahn is currently creating a chapel commissioned by Jane Owen and the Blaffer Trust to be constructed in New Harmony, Indiana. He is working with the architect to design the building, which will consist of one large room of his murals and two side chapels of his paintings and sculpture. 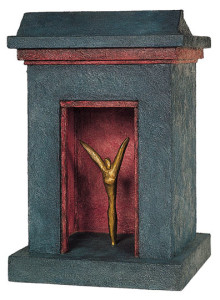 “Right now I’m working on creating a chapel for Jane Owen and the Blaffer Trust in New Harmony, Indiana. It’s a free-standing building in the same vein as the HealthCare Chaplaincy Meditative Space I did in New York. I’m also working on a meditative room, a small, free-standing portable space that will travel the world.”

“My show Avoda will continue to travel the country during the coming year. Through October it’s at the Jewish Museum of Kansas City; in November and December it will be at the University of Rhode Island, and in January and February it will be at the Chase/Freedman Gallery at the JCC of Greater Hartford in Connecticut. [For details on Avoda, call 212-624-9238.] I also have a show called Microcosmos at the Yeshiva University Museum in New York City this November 14 through January 26. For 2003 I have a couple more shows scheduled: one called Sky and Water Paintings at the Neuberger Museum in May, and a show of landscape paintings at the Cape Musem of Fine Arts in Dennis, Massachusetts, from July 17 to September 7.”