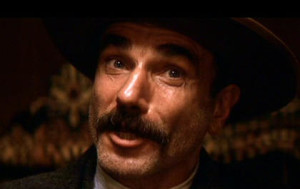 After reading reviews for Paul Thomas Anderson’s There Will Be Blood, I became frustrated. The consensus about its central character, Daniel Plainview, was that he was “a great oversize monster who hates all men including therefore himself” (Roger Ebert).

My problem? Watching the film, I had related to Daniel.

Anderson, who compares Daniel to Dracula, has said: “It’s hard for me not to see Plainview as a little bit heroic—he’s enormously ambitious, and I can sympathize with his quest for survival….”

But the truth is, I related with Daniel not as some figure representing American capitalism or Manifest Destiny—but in a direct, empathetic way. I felt I was watching something of myself up there on that square of heat and wildness. I wonder if other movie-goers saw a character not consummate evil, but of untamed fervor. About the heart Wallace Stevens writes:

This is Daniel, a nearly Shakespearean or Dostoevskian creation of a man working the ‘ox in his breast’ like Einstein worked his brain.

It seems acceptable to respect Thoreau’s man of quiet desperation, but what of the man who howls his desperation? When shown a character who is not going gentle anywhere, is it fair to see only his corruption? Perhaps judging him comes easily because he wants oil.

There’s a line in the film that counters the notion that Daniel is only motivated by money. Sitting with his “half-brother” and some businessmen, Daniel declines an offer which would have brought him money and ease. “But what am I going to do?” he asks. His work is his motivation; it is the human need to wrest liquid from dry land.

Another scene comes after Daniel has killed his half-brother’s imposter. After he digs the grave, Daniel lifts his face, and pain—which alcohol cannot ease nor willpower crush—comes to the surface. As tears push out from the crust of his body, the sound of something ripping is almost audible.

Though Daniel leaves his son H.W. after his injury, he is later bewildered by how to help. When he sends H.W. away, we feel his sense of loss when the train departs. After H.W. leaves, there is an ugly wound that no one around Daniel dares allude to.

But Eli Sunday dares. Take Daniel’s confession at Sunday’s Church of the Third Revelation, a confession he makes in order to secure land. Eli demands he repent for abandoning his son, making him say it louder. This pain of yelling does not transform Daniel. But if he lacks repentance, his sorrow (which is the beginning of repentance) is palpable.

As Daniel makes his way from the altar to the pew, several people fawn over him. Then, a moment of startling goodness: Daniel sits down, and Mary Sunday (Eli’s little sister) puts her arms around him.

Eli offers a mockery of forgiveness. Mary offers something genuine in response to Daniel’s sorrow, even if that sorrow drowns in other passions. The camera lingers on this embrace. Who are we meant to be in that shot, Daniel or Mary?

I think it is Daniel.

We interpret this film best if we read Daniel humbly. It is the same with King Lear, perhaps with Hopkins’ Dark Sonnets. They are made up of that which in our own heart scares us. In a way, these are the best characters, the best art: they confound us by speaking to our shadow-selves directly, without apology or fear.

Jessica Brown is a recent graduate of the Seattle Pacific University Master of Fine Arts in Creative Writing program. She is a guest blogger on Image's Good Letters Blog.