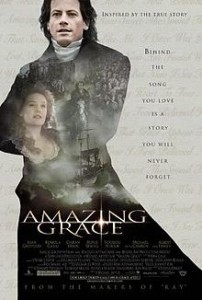 When you have a well-known story about a political leader in eighteenth century England who sets out to abolish the slave trade based on his Christian convictions; and when the sub-plot involves the epiphanic conversion of the man who wrote the most influential hymn of all time, Amazing Grace; and when the screenplay of a movie of the same name is by and large faithful to the historical account, no cynicism should be called for. But upon viewing this film, I find I am in fact slightly cynical, and I’m not exactly sure what warrants it.

Ioann Gruffud plays William Wilberforce in the 2006 release that co-stars Albert Finney as the hymn-writer, John Newton. From all accounts, Wilberforce was exactly as portrayed: an indefatigable reformer who championed the plight of the slave, accosted Englishmen for their support of an institution at war with their supposed Christian principles, and even managed to stump for the prevention of cruelty to animals. He met with opposition all the way, and refused to have himself seen as simply a political revolutionary in the vein of the American or French variety.

The film is handsomely photographed, ably acted—good understated turns by Gruffud and Finney—and does not cloy or pander in the way that most do-gooder films tend to do. The under-appreciated Irish actor Ciarán Hinds (Persuasion; The Mayor of Casterbridge—both excellent adaptations of Austin and Hardy) and the versatile Toby Jones (The Painted Veil—a great adaptation of Maugham; and Infamous, a redundant but worthy biopic of Truman Capote) make believable villains. It was, after all, good business to trade in slaves. And a huge portion of the English people did in fact depend on the institution for their livelihood. And truest of all, the rest of Europe (especially Napoleon) would rush in to profit from England’s surrender of its portion in the new world spoils gained through the ignoble enterprise.

It’s hard to portray the downside of doing the right thing—the unintended consequences mostly go unnoted—but they are at least mentioned in the film. So all is done well enough; for the most part, there is nothing irksome about this rendering.

But the scenes in the film that make you squint a bit and cock your head are the things that make you wonder if there is a design here, and if the confusion created isn’t purposeful. Why, for instance, is Wilberforce’s God found out in the garden, while sitting in the wet grass and by staring into cobwebs? On the other hand, the reformer does directly address God—once, by my count—which keeps things on an even kilter, and skirts away from pantheism.

But then again, there’s more than a wee bit of class warfare going on, and a touch of the socialist about much that motivates the great man’s colleagues. A moment of mutual admiration between Wilberforce and his soon-to-be wife revolves around their agreement as to the appeasement of Napoleon—so the pacifists get their nod. And Wilberforce seems so eco-friendly that rabbits and dogs run through his house and sit on his furniture.

This all may have been; it all may have happened just so. The political determinatives that drive things in modern currency are not new, and this film could be a fair depiction. But what bothers me is that so much of contemporary film seeks to engineer political opinions that it’s become difficult not to suspect manipulation. Is this the William Wilberforce I’ve learned about? The one who saves people because of his Christian convictions? The movie doesn’t deny that, but the most you hear of such things is the hymn (to be fair, the reformed hymn writer Newton does express his convictions clearly).

Again, my perspective may be the victim of an overactive skepticism, but there is more than a hint of the odd, and flatly unrealistic, confusion of two types here: the reformer of the utopian stripe, intent to make this earth a heaven; and the Christian reformer, meant to reawaken man’s understanding of what it is to be human—or more precisely put: of what it is to fail at being human. It’s hard to tell whether there was not some concerted effort to broaden the target audience by softening real distinctions.