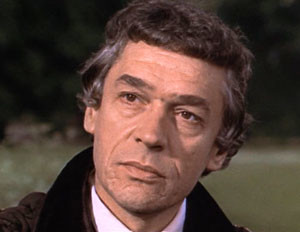 Other bloggers here at Good Letters seem to be establishing various narrative arcs—about music, fiction, etc. Well, it seems that I’m specializing in obituaries, this being my third in a row. Perhaps it’s my age, but in recent weeks I’ve felt the loss of several greats.

Today I celebrate the great British actor, Paul Scofield, who passed away at age 86 a few days ago. As a child, he mesmerized me as Sir Thomas More in the film version of Robert Bolt’s stage play, A Man for All Seasons—the role that won him an Oscar for Best Actor.

I loved historical epics and even as a kid was something of an Anglophile, so I was enthralled by A Man for All Seasons from the very opening shots, which are of stone gargoyles and dragons at Hampton Court. I also found the opening sequence, of a boat on the Thames ferrying More between his home in Chelsea and the court of Henry VIII, utterly enchanting.

But it was Scofield’s More that held me riveted. To understand the power of Scofield’s performance, however, one needs to understand Robert Bolt’s imagination.

Perhaps it was this film of Bolt’s play that planted the first seed of my love for Renaissance Christian Humanism. Though he was a former card-carrying Communist, Bolt was more sincere about his penchant for alcohol and the good life. Yet he was also a gifted playwright with a strange fascination for Christian Humanism.

In researching Bolt’s life I discovered that he developed a deep friendship with two intensely Catholic brothers in his university years. One of those brothers, Herbert McCabe, went on to become a brilliant Dominican philosopher and an expert on Thomas Aquinas.

Whether it was through his friendship with the McCabes or not, Bolt, for all his boozing and high living, was genuinely attracted to Christianity. In both A Man for All Seasons and The Mission, Bolt created the twentieth century’s two great cinematic depictions of Christian Humanism, which holds that religious faith must be made incarnate in culture so that it does not descend into mere moralism or ideology. Bolt understood that Christian Humanism upheld an incarnational balance between things human and divine that relies so heavily on art and literature.

In The Mission, Bolt created an icon of Christian Humanism with the Jesuit priest played by Jeremy Irons. After the Guarani tribesmen of South America have killed a Jesuit who attempt to proselytize them directly, the Jesuit played by Irons goes up into their territory and simply plays a flute—thus establishing a communion of beauty that enables the Guarani to accept him.

Thomas More was one of the greatest Renaissance Christian Humanists—a proponent of the importance of pagan, classical literature—bonae litterae or “Good Letters”—for the proper education of the Christian citizen.

In A Man for All Seasons, Bolt doesn’t stress More’s literary side; rather, he uses his knowledge of the law as the central metaphor of the play. At a time when England was wracked by the new Machiavellian power-lust, represented by Henry VIII, and the religious extremes of Catholic and nascent Protestant pietism, More sought to maintain a humane Christian position.

In both stage and film versions, Scofield inhabited this sensibility perfectly. His More is a somber figure, but flashes of his earlier, merrier self emerge for brief moments (for the last time at the executioner’s block). Though he was one of the most educated men in Europe, he maintains a friendship with the bluff aristocrat, Norfolk. In the opening scene he is sitting at home with family and friends who are mocking corrupt priests, and yet as he leaves for court he can call his wife and daughter together for prayer. Untouched by corruption himself, he fails in his attempt to prevent the ambitious Richard Rich from becoming a Judas.

Relentlessly hemmed in by the emerging power of the secular state and a religious world that is either opportunistic or Pharisaical, Scofield’s More spends the play attempting to escape his fate. He even manages to elevate escape to the level of high principle. Speaking to his hot-headed future son-in-law, he says:

“God made the angels to show him splendor—as he made animals for innocence and plants for their simplicity. But Man he made to serve him wittily, in the tangle of his mind! If he suffers us to fall to such a case that there is no escaping, then we may stand to our tackle as best we can, and yes, Will, then we may clamor like champions…if we have the spittle for it. And no doubt it delights God to see splendor where He only looked for complexity. But it’s God’s part, not our own, to bring ourselves to that extremity! Our natural business lies in escaping….”

I never heard that Scofield had any religious convictions, though he was highly praised for his role as the whisky priest in Graham Greene’s The Power and the Glory. But he was known as a profoundly humble man, who turned down the offer of knighthood three times and preferred the stage to Hollywood and his home in the country to the limelight. Perhaps there was a bit of the humility of Thomas More in Paul Scofield.