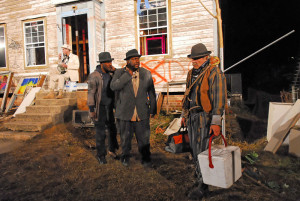 When a production of a classic play gets reported by Yahoo News, NPR, The New York Times, and the Seattle Times (off the AP wire), you know something powerful is going on. And so it was with the Classical Theater of Harlem’s performance of Waiting for Godot in New Orleans last November.

Setting the play in post-Katrina New Orleans was the idea of visual artist Paul Chan, the production’s artistic director. And set it there he did, right out on the streets of the most devastated area of the city. One weekend’s performances took place at a once busy intersection in the now abandoned, bulldozed neighborhood of the Lower Ninth Ward; the next weekend’s shows were in the Gentilly neighborhood in front of the flooded wreck of a house.

Two black actors played Vladimir and Estragon: Wendell Pierce (actually a New Orleans native) and J.Kyle Manzey. So they looked right at home, so to speak, in a play and a place where no one has a home, where all is suspension, waiting.

All the performances were free, and residents of the area turned up in droves. Hundreds had to be turned away. Those who got to see the show saw their own current situation unfold in front of them. For them, the eternally waited-for Godot was a composite of all the government agencies and NGOs that had promised to save them and then never came.

Chan told NPR that the idea for doing Godot as true street theater came to him when he visited the city in 2006. The astounding desolation inspired him to “create art in places where we ought not have any.”

I’m moved by this mission. Nearly all our American cities are devastated to some extent. How can art speak to and for the souls of their abandoned inhabitants? Chan has modeled one way, carrying on a tradition of Godot performances in politically charged places: San Quentin prison in the 1980s; Susan Sontag’s war-time Sarajevo production in 1993. Do Christian artists have a special calling to create for the city? The 2008 Glen Workshop, with this summer’s theme of “The Artist and the City,” will be abuzz with the question, the challenge.

Meanwhile, I wonder how the Christian backdrop of Waiting for Godot played out in the New Orleans’ production. I wish I knew how the director had the actors play the lines that point to Christ’s absence from the starkly bare tree and his unfulfilled promise of return. In a situation where people have been abandoned by their fellow human beings — by those in authority entrusted with their welfare — how do they speak about an absent God? I suspect that God will naturally seem absent anywhere that human beings themselves are not doing his will, which in New Orleans means not tending to the least among us.

It sounds as if Chan’s Godot powerfully dramatized this abandonment.