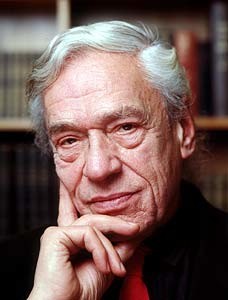 All will be judged. Master of nuance and scruple,
Pray for me and for all writers, living or dead:
Because there are many whose works
Are in better taste than their lives, because there is no end
To the vanity of our calling, make intercession
For the treason of all clerks.”

In the recent flurry of notable deaths – including film director Anthony Minghella, Chiara Lubich, who founded the lay ecclesial movement, Focolare, and novelist Jon Hassler—I, like Greg Wolfe, took special note of the passing of actor Paul Scofield. Years ago, I did time on the stage, first in school and then in an amateur acting company. I knew a little of Scofield’s reputation in the theater, but his academy award winning performance in A Man for All Seasons won my unreserved admiration. I studied him in that film, attending to carriage and gestures, those eyes forever somber yet smoldering with determination and the hint of merry wit, the precise modulation of his commanding voice. I learned a great deal, even if I never quite internalized the lessons.

In my brief career as an actor, I had little in common with Scofield save a powerful voice, and even that posed problems. In my first show with the amateur group, the director generously cast me in the small role of Sir Charles Marlow in Goldsmith’s She Stoops to Conquer. After a week of rehearsal, she called me over and said, “We got a problem. Your voice is too big for the part.” My solution was a stutter – copied from Derek Jacobi’s Claudius – an affectation which fooled one theatergoer into complementing me on braving the stage despite my severe speech impediment.

I spent two more seasons with the company–they even let me direct a production of Thornton Wilder’s The Skin of Our Teeth–but I knew I was out of my league. The company of talented and committed actors, while immensely stimulating, convinced me I was best suited for the audience. So I returned to watching closely, and Scofield, whenever he made one of his rare film appearances, caught my eye. I don’t know how he chose his film scripts–he was busy enough onstage to be choosy–but a thread running through his best performances is the juxtaposition of authority and bewilderment.

In A Man for All Seasons, Scofield honored playwright Robert Bolt’s description of More as having “an adamantine sense of self” while betraying More’s alarm as he learns how far the Tudor state will go to consolidate power. In Kenneth Branagh’s Henry V, he’s the war-weary French king caught between an overconfident Dauphin and the ascendant Henry. As noted poet and professor, Mark Van Doren, in Quiz Show, he discovers too late what’s troubling his son. And in The Crucible, his Deputy Governor Danforth commands Elizabeth Proctor to, “Look at me only…in my eyes only,” while the camera closes in on those very eyes, their dark fires confessing both command of the law and growing horror.

Scofield won his contemporaries’ admiration. Richard Burton once said, “Of the ten greatest moments in the theater, eight are Scofield’s.” More telling, however, is how much those same contemporaries honored his integrity and humility. Critic Edward Copeland recently said, “I’ve always used the running gag that ‘All British actors are whores,’ though I always qualified that with one exception: Paul Scofield.” The Boston Globe’s Ty Burr said, “Scofield was the film star who wasn’t…. He was primarily about the stage and, even more fundamentally, about playing a role before a live audience. ‘Acting is all I can do,’ said the man who turned down a knighthood three times and who stayed married to the same woman for 65 years.” As for that spurned knighthood, Scofield explained, “If you want a title, what’s wrong with ‘Mr.’?”

Like Greg, I don’t know what religious convictions, if any, Scofield may have held, nor can I take the measure of his soul, though the Times of London notes that Scofield’s craggy face (“almost demanding veneration”) and distinguished manner led other actors to name him “Saint Paul.” This, however, seems clear: Scofield was a decent man more in love with his craft than his image. In an age when “there are many whose works are in better taste than their lives,” that’s saying something.