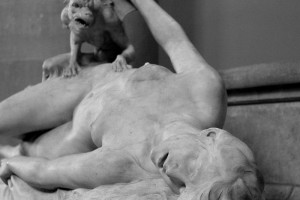 For seven months, I passed through a season of voices, visitations, strange votes from a memory that would have me believe this friend had touched my hand, that one had risen from the dead. I woke most mornings parched and oddly drunk on whatever I had dreamed, my body full of pain.

I finally went to see my doctor, a young Indian man exactly my age, between whose desk and the wall I once saw stashed a greasy, half-eaten Oberto pepperoni pack. His wonderfully caramel-colored poker face quivered a bit as I explained that at night, I had terrible nightmares; and in the morning, the thick dreams clung to me.

The nightmares culminated in a vision from which I woke hot, sobbing, my shoulders touched in the dream by fiery hands against which I had kicked and fought in my sleep. I did not tell the doctor that the nightmare borrowed from the dreams of a friend I loved like a brother, a friend whose psychic pain had wrought vivid nightmares each and every night from childhood on.

And I did not tell the doctor that when I woke from that dream, huddled with my husband on the futon of a friend’s guest bedroom, Ben prayed for me and for my healing with the fervency of a child.

Spiritual warfare was a root-cause I began to consider as the nightmares wore on and on. Ben had scoffed, gently, at this idea, existing as it did for him as some semi-lewd preoccupation of the Pentecostal kids in the little Montana town where, as a teenager, he farmed every summer.

“Dad, Ben believes in evolution!” one of the kids had hollered from the campfire, the one time Ben was invited to join them on a weekend camping trip. The witnessing and exhortations went from there.

He was still Catholic in those years, loosely, having skipped Confirmation. Beyond the memory of spine-tingling Catholic school lectures from a priest who had studied the occult, there was relatively little place in Ben’s religious understanding for the princes and principalities of darkness—much less the pop-demonology of Frank Peretti, Mike Warnke, or any other spiritual warfare specialists that might have been conjured up around that campfire.

Ben reminded me of my own father, in this way: impatient with trendy arousals of terror or glee, no matter who peddled them, and, in a related way, reticent to pray in public—partly out of a kind of privacy and tenderness and partly, I believed, out of a kind of pride.

Ben and my father also held a common distrust of this childhood friend, this boy I loved like a brother, whose pain—and now, whose dreams—haunted me. What I saw in my friend as the natural soreness of abuse, my father, in my childhood, and my husband, in my adulthood, saw as a needy potential to sap and manipulate.

I don’t know if the worst of my nightmares proved my father and Ben right or wrong. But I do know that my doctor, befuddled and a bit shaken, did the best he could by scheduling me a sleep study at a suburban clinic.

I biked back to work that day with the script stuffed in the bottom of my pannier, knowing that the sleep study wouldn’t work, knowing that even if my nightmares performed for the electrodes and dials, the reports might only tell me what I already knew: I didn’t breathe when I slept, and I was feverish and sweaty, and I talked loudly and kicked against people who weren’t there.

A few weeks later, I canceled the clinic appointment. I cut all ties with my childhood friend. I received soaking prayer, as it is called, from prayer ministers at our church, a man and two women who sat with Ben and me for several hours on our bedroom floor. I floated in the bade pool of a suburban jimjilbang, watching the Korean grandmothers’ soft shoulders and breasts bob like flowers just above the water, hoping that the relief of the warm pool would stay, this time, and soothe my body.

Slowly, the nightmares began to ebb; the poison they shot through my muscles began to dissipate. Within two weeks of receiving soaking prayer, the dreams were mostly gone. I thought about the shame and anger my childhood friend had expressed in our final email exchange. I wondered if I would ever see him or speak to him again. Complete separation remained a painful prospect—much because I still wanted to save him, as I had from the first days of our friendship.

Over the last couple of months, I have had only a few nightmares that meet my whole body and stay with me, physically, for a day or a week. I wonder if I’ve become like someone with a delicate ankle or a trick knee, a person who has to be careful not to stress the joint she once broke.

I had a final dream about my friend. We were lying in the grass, hands on stomachs, staring up at the sky. He turned to me and said: “You’ll teach me about the order of love.” I sat up, taken aback, and said, in funny dream-language, half-remembered from Mary on her Annunciation day: “How can this be? I’m married.”

In the Gospels, divine love orders and heals. The most desperate want and get this gift: the meek, the hungry, the poor in spirit; the demon-possessed man who lurks in the tombs, crying out and cutting himself with stones, shouting at the top of his voice, “What do you want with me, Jesus, Son of the Most High God?”

There is also the moment in Matthew when little children are brought to Jesus for Him to place His hands on them and pray. It is a gentle, healing scene, much remembered in devotional art, so much easier to enshrine than the equally tender moment when the demon-possessed man, having been healed, begs Jesus to let him join the disciples in their boat.

It is hard, after years or even just months of pain, to become like a little child who trusts and receives love as the good food that it is. It is hard to dream that joy is more expansive and satisfying than guilt or fury or desire. But it is good, when the mouth finally opens, to taste the honey and the marrow.