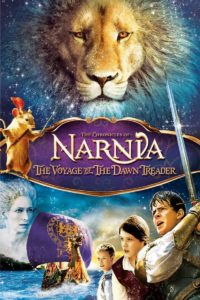 The Chronicles of Narnia: The Voyage of the Dawn Treader—Walden Media’s third Narnia movie—portrays one of the fiercest battles you’re ever likely to see at the movies.

I’m not talking about blades and arrows (although even C. S. Lewis would be alarmed at how much violence occurs in big-screen Narnia).

No, I’m talking about wars waged off-screen as this Voyage was translated for the screen.

Dawn Treader is, let’s face it, a meandering tale. As Prince Caspian sails from island to island, his adventures are episodic and conversational—hardly compelling movie material. The screenwriters revised Dawn Treader into the series’ most entertaining and enjoyable movie so far…

…and they botched its themes badly, just as they bungled the first two. Either they don’t understand Lewis’s story, or they’re actively subverting ideas he illustrated beautifully.

To be fair, I’m grateful for those at Walden Media who share C.S. Lewis’s faith, and who fought “For Narnia!” I want to thank them for preserving at least two of Dawn Treader’s profound storylines.

One follows Eustace, an obstinate boy who must learn humility, courage, and the value of the imagination. Dragged into high-seas adventures with Caspian and Reepicheep, he makes himself an intolerable nuisance. As played by Will Poulter (Son of Rambow), Eustace’s insolence is entertaining, even endearing.

True to the book, Eustace catches gold fever and is transformed into a dragon. Giddy at the opportunity this presents for special-effects mayhem, the filmmakers almost spoil everything by contriving a battle between a sea serpent and the suddenly valiant, fire-breathing Eustace.

Despite these embellishments, Eustace’s story arrives at its proper conclusion. He’s not a hero. He can’t save himself from the wages of his sin. It’s Aslan to the rescue.

While her friends sleep, Lucy is kidnapped by invisible “Dufflepuds.” They lead her to The Book of Incantations and ask her to read a spell that will break their invisibility curse. They’re illiterate, you see.

Can you hear the high-fiving at Walden Media? They’ve never produced a scene that better illustrates their primary mission: to make movies that inspire young people to read great books.

See what happens when Lucy opens a book? She breaks curses! She makes unseen worlds visible! And she discovers a story so beautiful that she wants to read it again immediately! But it’s a magical book. Once read, the story is gone. Lucy will spend her life longing to remember that story and its mysterious consolation.

Isn’t that what great fairy tales do? They inspire us with a mysterious hope and consolation that other genres rarely offer. As adults, we long to revisit the childhood enchantment we enjoyed between “Once Upon a Time” and “Happily Ever After.”

J.R.R. Tolkien told C.S. Lewis to stop lamenting his attraction to pagan myths and fairy tales. Pagan myths—with their stories of paradise lost, war in heaven, and worlds redeemed by a dying god—expressed humanity’s longing for reconciliation with the divine and anticipate the advent of Christ, the “true myth” of the Gospel.

But all this gets lost in translation. Critic Steven Greydanus points out that the filmmakers even overlook the significance of the title: They never once show Caspian’s ship fulfilling its purpose and sailing eastward toward the dawn— toward Aslan’s country.

Watching Dawn Treader’s storytellers lose their “golden compass,” I was startled to see that they preserved the story’s most blatantly “evangelical” moment: Aslan tells Lucy that she can seek him in her own world by another name.

That scene set Seattle film critics to groaning. I heard one lament that the movie would have been better without “all of that religious stuff.”

And although I’m risking the wrath of all Narnians, I gotta say—I agree.

For me, Aslan’s words to Lucy remain one of the most frustrating moments in the Narnia Chronicles. Profound as they might be, they violate the “Show, Don’t Tell” principle so fundamental to great storytelling. When Aslan starts pointing out direct correlations with Christ, his story is reduced to a Sunday School lesson.

I’ve always preferred Tolkien’s mythmaking. Middle-earth needs no justification or explanation. We don’t need Frodo or Aragorn to remark, “Golly, I’m Christ- like!” I wish Lewis had trusted his fairy tales to speak for themselves, trusting his readers’ intelligence.

But despite my frustrations with Lewis’s allegorizing, I’m still haunted by many inspired moments in the book.

In one of my favorite exchanges, the skeptical Eustace meets the magnificent Ramandu, who is—quite literally—an age-old star. Eustace says, “In our world, a star is a huge ball of flaming gas.” Ramandu responds, “Even in your world, my son, that is not what a star is but only what it is made of.”

Thus Lewis reconciles what are often portrayed as opposing viewpoints. The poetic “Dark Ages” perspective nods respectfully to our post-Enlightenment scientific method, while acknowledging that truth is made of more than mere information.

Is that moment in the film? Of course not. Poor Ramandu never shows up. Did the writers think he was unimportant?

I’m grateful for Walden Media’s campaign to get people reading. If it works, moviegoers will find in C.S. Lewis a wiser storyteller than Narnia’s screenwriters. Perhaps Walden should start a reading comprehension program for filmmakers, teaching them to read closely, and to ponder what something like “Dawn Treader” means.