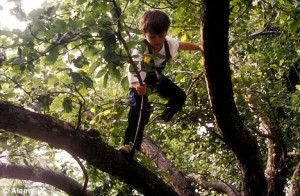 Ever since Greg Wolfe started a Facebook thread about the movie, I’ve been thinking about Tree of Life—particularly the section depicting the birth of the universe.

At first it appears to be a cinematic non-sequitur, and it seems also never to end.

It does end, after almost twenty minutes away from the narrative. The big bang gets it started, then galaxies form—gaseous explosions of color and light, giving birth to worlds that twirl and twist into endless space—and the universe spreads. Swirling eruptions on earth eventually lead to the formation of life. Organisms spring up, develop, evolve. Eventually creatures appear. Dinosaurs. They struggle. They kill. They eat.

As I watched these scenes the first time, I assumed that this was just Malick’s way of dramatizing God’s answer to the question posited in the film already, the question of Job: why all my suffering?

God’s answer, which begins in chapter thirty eight of the book of Job, starts with God’s challenge, “Where were you when I laid the foundations of the earth?”

How does this relate to the title? What is the tree of life? Is it the evolutionary branching out of life as it finds its various ways, splitting into ever more specialized forms out at the tips of the tiniest branches? And what does that have to do with the problem of Job?

Artur Sebastian Rosman wrote that this long section also had to do with grace, and mentioned the streams that flow through the entire movie, linking the seemingly unrelated parts together. Mr. Rosman and I are just Facebook friends, but from his posts I have come to value his opinions. I knew he was right. But what could this violent and impersonal series of events have to do with grace?

As I watch I am ever more aware of how massive and old the universe is. The piling on of images leaves me stunned, awe-struck. I do not know where God could even be in all of this, and if God is here, what that God is like. I feel a sense of transcendence, but I cannot apprehend it.

I think of a passage from E. L Doctorow’s City of God: The speaker, a famous physicist, stands in his synagogue and says, “It was not a large world, ancient Israel. The Hebrews conceived of a cosmic God, a magnificent single God of the universe, but naturally in terms of their land and its crops…the applicable honorifics being Lord or King. All very understandable.”

He goes on: “But if you take the trouble to think of what we know today about the universe…how it is roughly fifteen billion years old, and how it suddenly inflated and has been expanding since, how space is ineluctably time, and time is ineluctably space, how gravity can bend it, how another force in space countermands gravity so that the universe doesn’t collapse into itself…and how the universe in its perhaps ever increasing rate of expansion accommodates not just galaxies, which contain millions of stars, but multiple clusters of galaxies that are themselves strung out in clusters of clusters…and with all of this dark matter that we are yet to understand…well, it would seem to me that the creator who originated the universe, or what may possibly be a number of universes of which this is the only one we are capable of perceiving…who is by definition vaster and greater than all this…is perhaps insufficiently praised by our usage of the honorifics Lord and King, let alone Father and Shepherd….”

And there’s the rub. You see, a sense of transcendence isn’t the problem. Everyone, believer and unbeliever alike, senses it when contemplating the vastness of the universe.

Immanence isn’t the problem either. Not really. When I feel this wonder, I believe I am getting a glimpse of the eternal, which is always and ever present in the vastness of space as well as the smallness of each instant.

When Malick pulls me from this mind-bending barrage of images and drops me back into the narrative of Tree of Life—one small boy, one small man, struggling to figure out what his existence and its attendant suffering means—everything has changed.

Now I’m watching him still, but I cannot shake the awareness that the whole vast universe is over both of our minuscule shoulders, time and space too vast to know, and it rolls on into infinity not even aware of us, much less concerned about our welfare.

I wonder with Whitman that I am here at all, that life exists, and I have identity. I am inside my body, looking out of my skull at the rest of the world like a deep sea diver through his helmet’s mask. Identity. It is my particular existence, small as it is, that I am concerned with.

In this vast impersonal universe it is a ridiculous idea.

Ridiculous, and yet there it is.

Dillard writes, “I never saw a tree that was no tree in particular.” She describes her fleeting glimpse of the eternal as she pats a particular dog and watches the evening light burst through a particular tree outside a particular gas station.

She says, “I discover that, although the door to the tree with the lights in it was opened from eternity, as it were, and shone on that tree eternal lights, it nevertheless opened on the real and present cedar. It opened on time. Where else?”