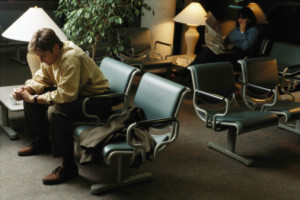 Since being diagnosed nearly seven years ago with a lethal cancer, I have backed my old friends and new acquaintances into a quandary. What do you say to a dying man?

Strangers don’t seem to have any difficulty. Now that chemo­therapy has reduced me to a tattered coat upon a stick, I am routinely praised, when out in public with my four young children, “Oh, isn’t that sweet, you’re spending the day with your grandkids.” Under the guise of being nice, Americans can be breathtakingly rude. After about the hundredth time I was called their grand­father, I tried out a new reply: “These are my children. I am dying of cancer. The disease has prematurely aged me.”

Am I being cruel? Or merely repaying a pretense of frankness with the reality of frankness? The late Christopher Hitchens warned those who were blunt with their questions about his esophageal cancer to expect blunt­ness in return. I’d prefer unembarrassed bluntness to the faux-niceness and cliché-hobbled awkwardness with which many people address me. Only children seem to lack the social phooey which passes for good manners and are unafraid to ask me outright, “What’s wrong with you?” (It doesn’t hurt that they are satisfied by the answer, “I am very sick.” I am always quick to add, “Don’t worry: you can’t catch it from me.”)

“How are you?” is not, then, the best thing to say to a cancer patient. Lisa Bonchek Adams, who lives with metastatic breast cancer and chronicles her experience in a moving and informative blog, suggests, “Is this a good day or a bad day?” The question is apt, because even though bikur holim (visiting the sick) is a mitsvah according to the Jews, a visit on a bad day may not be an act of kindness.

Don’t tell a cancer patient about someone you know who also suffered cancer—no matter what the outcome. What is your purpose in telling the story? Will the account of someone else’s “survival” flood the dying patient with hope? Will someone else’s narrated pain and death stiffen him with courage?

In truth, you itch to relate the story because you long for a connection with the patient. You’d like to establish a common ground. But there is no common ground: a cancer patient is an alien from another planet. You must respect his fundamental otherness.

So too the glib truism that “we are all dying.” Yes, we are; but most of us are not made aware of it every waking minute of our lives. To experience death’s approach, as George Eliot writes in Middlemarch, is rare: “When the commonplace ‘We must all die’ transforms itself suddenly into the acute conscious­ness ‘I must die—and soon,’ then death grapples us, and his fingers are cruel.”

This is a knowledge that is eventually given to everyone, but not in the abstract and not in a ready verbal formula.

Most of all, don’t babble to cancer patients about alternative medicine. Don’t pester them about nutrition and vitamin supplements, don’t theorize that the cure for cancer is being suppressed to boost corporate profits, don’t speculate about what caused their cancer, don’t announce that you’ve heard, vaguely and fourth-hand, of amazing breakthroughs in treatment down in Mexico. (Every one of these has been vouchsafed to me.)

When you say these things you imply that your friend is a victim of incompetent doctors or a faceless conspiracy or a lifetime of sinful behavior. The person with cancer, however, is not a victim, but a patient—she must wait in suffering.

Help her, then, to endure the waiting. It is no secret that waiting is the most maddening and inhuman side of the American medical system (and in the case of the Veterans Administration, the most deadly). Doctors’ office and hospital waiting rooms, the least comfortable rooms ever dreamt by interior decorators, are

sequestered in space and filled with time
Pure time, refined, distilled, denatured time
Without qualities, without even dust.

The lines are Howard Nemerov’s. Some medical institutions have sought to humanize their waiting rooms by outfitting them with television sets, but being immersed in the sounds of daytime TV while trying to read or think is simply another form of suffering the patient must endure.

The job of a patient’s friends is to remind her that not even waiting for an unknown end need entail the suspension of time, the detachment from life. It can, instead, be what Nemerov calls “the razor of a moment,” the satisfaction of a life lived “between anticipation and regret.”

The way to talk to the dying, that is, is to return them from death to the immediate experience of life. Neither hope nor dread belong to the moment; they encourage the patient to stare outside of time; but when the moment is lived to the full, the unexpected may reveal itself: even joy.

I am not saying their friends should distract the dying from what is hap­pening to them, but rather should try, with all resources available, to remind the dying that their death is not all that is happening to them.

Every Saturday afternoon, now that I can no longer attend shul, my three closest friends in town gather in my living room and bring the Sabbath rest to me, debating halakhah and the future of the Jews, tossing around ideas and interpretations. For a few hours, I need no better reminder of what life contains.

A critic and literary historian for nearly a quarter of a century at Texas A&M and Ohio State universities, D. G. Myers is the author of The Elephants Teach and ex-fiction critic for Commentary. He has also written for the Image Journal, Jewish Ideas Daily, the New York Times Book Review, the Weekly Standard, Philosophy and Literature, the Sewanee Review, First Things, the Daily Beast, the Barnes & Noble Review, the Journal of the History of Ideas, American Literary History, and other journals. He lives in Columbus, Ohio, with his wife, the pediatric cardiologist Naomi Kertesz, and their four children: Dov, Saul, Isaac, and Mimi.