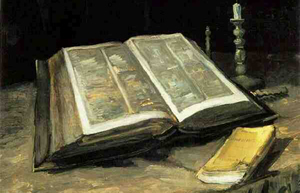 Several months ago I blogged about the Ken Ham Bill Nye debate at Liberty University. I hadn’t given the two much thought since then until last week when they both rose back into the media. My son’s Popular Science magazine arrived with Nye on the front, his fists wrapped like a boxer’s, and the title of the article about him: Nerd Fight! The same day, Ham hit the news as a butt of jokes for blogging that intelligent alien life cannot exist because, “the Bible makes it clear that Adam’s sin affected the whole universe. This means that any aliens would also be affected by Adam’s sin, but because they are not Adam’s descendants, they can’t have salvation… To suggest that aliens could respond to the gospel is just totally wrong.”

What struck me about the Ham kerfuffle is how this arises from the same place that his strict stance on young earth creationism does. At its core, this is not about the science; it is about hermeneutics.

After my post about the LU debate, I had a brief exchange with a commenter who identified himself as Paul. Paul took issue with my calling Ken Ham a biblical literalist—and my saying that this was the reason he could not look at the scientific evidence honestly.

In our subsequent exchange, Paul made the following assertions:

If you interpret Genesis as figurative, that cause problems with what the Bible says elsewhere (example: Romans 5:12 says that death is a result of sin, but if evolution is true then death existed before Adam and Eve existed).

Like I said, when Ken Ham responded with “I’m a Christian”, I think he means that there is no scientific or historical evidence that would contradict the Christian worldview.

What does one part of scripture’s relation to another have to do with an analysis of scientific evidence?

The basic theology behind what Paul calls the Christian worldview, and this insistence on young-earth creationism is Premillennial Dispensationalism. It was developed in the late 1800s by John Nelson Darby and it harmonizes the entire Bible into an all-encompassing story of the entire universe. It is a map, a guide for looking at history, judging present crises, and knowing with certainty what will come in the future.

According to this system, the purpose of all creation is God’s relationship with humanity, which he carries out according to seven different governing systems or dispensations:

1. Innocence: begins with the literal six-day creation and ends when Adam and Eve screw up

2. Conscience: everyone screws this up and has to be drowned, except for Noah and his family

3. Government: this takes us from Noah to the promise that Abraham will father nations

4. Promise: from Abraham to Moses and the Law

5. Law: this dispensation takes us from Moses to Jesus

6. Grace: the dispensation in which we are living right now

7. Millennial Kingdom: after the Rapture and the seven years of the Great Tribulation

Before the first dispensation is eternity past, in which only God exists, and after the thousand-year rule of the Millennial Kingdom is eternity future, in which human beings exist consciously in heaven or hell.

I remember Sunday school charts in the dank church basement depicting all of existence, past present and future. With some variations—I remember some hot controversies over whether or not Christians would be raptured before the Great Tribulation or suffer through it—this is the basic timeline.

It is a tightly structured harmonization of the entire Bible into a categorical universal history, coupled with the doctrine of Biblical inerrancy—the Bible does not contain one iota of mistaken or false information—at the root of young earth creationists’ refusal to look honestly at the scientific evidence. If one tenet falls, the whole system collapses.

Several years ago I blogged here about a group of former Liberty students in town who have left their childhood faith:

The belief system they’ve been taught all their lives is a theology of one calcified piece, each point taught with the same absolute certainty as every other. They begin to notice oddities in this theological landscape. A stone seems fake, held in place unnaturally—say the doctrine of verbal, plenary biblical inspiration and its subsequent inerrancy; or the prohibition against women in the ministry; or the insistence on a literal, twenty-four-hour, six-day creation six thousand years ago—and they get suspicious, start to kick around.

They kick away a stone—decide, for example, that they cannot believe in a literal talking snake causing all the world’s woes any more than they could believe in a literal, historical Pandora. The one stone falls away, and then another falls after it, and with that the collapse begins.

The ground crumbles from beneath them in outward circles like ripples on water. Everything their lives were built on falls away until they are floating, totally unmoored, casting about among the twisting and drifting fragments of their childhood faith, trying to cobble something together that they can live with.

When I was young, I heard more than once in church that if a single scientific or historical claim in Scripture was wrong then none of it could be trusted. It terrified me because even at a young age I recognized inconsistencies and seeming contradictions in the texts.

It came as a great relief years later to realize Biblical literalism is not the only option, the Christian worldview is bigger, and richer, and deeper than that. It is quite possible to be a Christian who engages the scientific community without the spirit of fear.