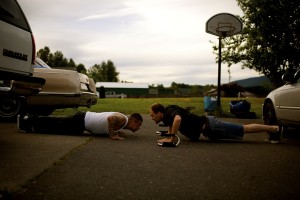 “Good Letters” is pleased today to welcome Chris Hoke as a regular contributor.

In the beginning, when God was creating the heavens and the earth, the earth was a desolate waste. Chaos. Smoking rubble. Like after a war. Our beginning, we Bible readers should understand, was post-apocalyptic.

That’s what I tell the guys in jail, as a regular chaplain there, when someone pipes up now and then with the Genesis and evolution question.

I back us up, and—depending on how much time we have before the guards come and pop the heavy door open—I teach the guys a Biblical Hebrew phrase: tohu wa-bohu. It’s fun to say. You get men with tattoos on their face all saying “tohu wa-bohu,” starting to laugh, and the dark, often-futile topic already has some light shining in.

Tohu wa-bohu is the description of God’s canvas where he began to create in Genesis 1:2. In the guys’ different American Bibles it’s often translated as “formless and void,” or “without form and empty.” But, I say, lots of scholars insist the best translation would be something like “chaos and destruction.” In the Aramaic Bible—the language Jesus spoke—it’s translated as “the earth had become ruined and uninhabited.”

What? That doesn’t sound right. At the beginning?

The conversation in the jail Bible study—and the entire creation account—shifts here.

Paying attention to the Biblical author’s language, and not to our ideologies we impose on the text, invites a different reading of how and where God is Creator. Does creation happen primarily on a blank canvas, or out of the brokenness?

The whole idea of God creating ex nihilio, out of nothing, is a Western philosophical tradition. Augustine’s actually. It gets at the same speculation as modern science’s Big Bang theories. The hypothetical hunt for a blank slate underneath all of history’s layers of butterflies and hurricanes, waterfalls and warlords.

When was the clean beginning?

I share with the circle of men in red scrubs, their toes sticking out of lousy orange rubber sandals, that it’s very probable this portion of Genesis was written when the people of Israel were in captivity. In Babylon. They’d seen the tohu wa-bohu of their worlds, seen Jerusalem sacked, their Temple (the presence of their God) in a smoking rubble, their lives and meaning and orchards and children’s laughter all destroyed. They lived as captives in a darkness many men in our jail group know all too well.

What caused this “desolate waste” in Genesis 1:2? We can’t help but ask. What came before the mess?

Maybe, some scholars say, the Hebrews were surrounded by the creation myths of the Babylonians, where they were slaves: the Epic of Gilgamesh, the Enuma Elish, where the primordial gods war for power and tear at each other’s throats and create empires from the cadavers of their defeated foes. Maybe the Genesis account is picking up in the waste and devastation left by the old gods, peacefully, generously creating. But the text doesn’t tell us, doesn’t go into any of that primordial backstory.

Many times, neither do the inmates want to go into all the gnarly backstory of what brought them to this place. Genesis begins with what we face now, without speculation and investigation into all the horrors of what’s past. The creation account describes God making a new beginning out of what looked like the ending.

That’s good news when you’re looking at the ending. Or sitting in it.

“Where is God in all this?” That’s often the question for inmates I visit and with whom I pray. It’s a similar question my ecologically-minded friends are asking in the face of climate change and the steady devastation of our tender planet.

According to the creation account, God’s Spirit is right there, hovering over the deep, the abyss, the waters—ancient symbols of chaos, death and flood (already present, we should note, before God begins to create).

It is at “such places,” post-apocalyptic novelist Cormac McCarthy writes in The Crossing, “that God sits and conspires in the destruction of that which he has been at such pains to create.” That’s where you find God. Hovering over the tohu wa-bohu.

There in the chaos, Genesis tells us, God creates a beautiful garden. God separates the light from the darkness, the waters from the land—the way my guerilla gardener friends pull old tires from the brambles of abandoned lots, hack back the thorns, and drive in trucks full of organic composted soil. Then flowers. Then trees. Fruit to eat, and vegetables. Then homeless folks wander in. Then potlucks, and communion, and God’s story continues.

These guys in the circle, awaiting judges’ decisions of hope or doom, usually aren’t thinking about the other apocalypses of climate change, the devastation of species, or the collapse of Western civilization. But it applies to all that tohu wa-bohu too.

The point of all this, I might say to them, is that God as Creator is not some one-time thing at the dawn of time. Rather—like evolution—it is an ongoing, creative process across the eons. Like a guerilla artist’s career. God adapts.

Jesus sees withered and useless eye sockets of a man born blind, and there he creates sight—using dirt and spit. He sees the Roman cross outside Jerusalem, a site of criminal execution, the tohu wa-bohu where stories come to a rotting, suffocating end, and there he surprisingly manifests God’s glory to a world hardly watching. Then, from the belly of the dark grave, God’s irrepressible life bursts forth and renews all creation, Christians believe.

“So,” I might ask just before the doors pop open, “where is the darkness and waste inyour life? Go back and read Genesis, sit in your darkness. Read it like an ancient design for how God might continue creating something new in the midst of your mess.”

Chris Hoke works with Tierra Nueva in Washington State’s Skagit Valley. His first book, WANTED: A Spiritual Pursuit Through Jail, Among Outlaws, and Across Borders comes out from HarperOne in February 2015. Learn more at chris-hoke.com.