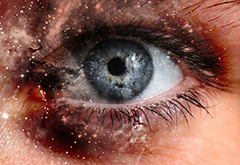 My suspicion grows apace with the slickness of a presentation. This is one reason I squirm in a megachurch. PowerPoint slides, emotion-tugging video clips during the pre-game show, music crafted to feel edgy and relevant—my skin crawls like I’m about to hear a sales pitch, which I guess I am, which maybe isn’t so bad for God-seekers who aren’t inveterate curmudgeons.

“Slick,” likewise, was my first response to Neil deGrasse Tyson’s Cosmos reboot, which evoked its own megachurch feeling, alternating sci-fi videography with fervent sermons about evolution. The risk in a new set of films from the BioLogos Foundation, which seeks to draw people into a conversation about the intersection of science and faith, is that they will spark exactly that, only one that marries the megachurch’s Jesus-Superbowl with the liberation theology that is evolution theory in the mouths of pop scientists like Tyson.

The danger, in short, is that the conversation is over before it begins, because participation requires one side to lay down their presuppositions, but allows the other to continue clutching theirs like a toddler his candy.

Unlike Cosmos and the megachurch, however, BioLogos features serious scientists and theologians. That in itself need not amount to much, of course—the multiplicity of each is both consequence and cause of the errors running through their fields. (That’s not a knock against science or theology. All fields of human exploration are error-riddled; the only question is whether a particular domain has the principles, procedures, and talent to systematically exclude those errors.)

The intellectuals associated with BioLogos could be wrong, in other words, but by inviting conversation, at least they seem to welcome the emergence of truth.

And what is the truth, when it comes to the intersection (the collision!) of science and faith? The very question is wrong. Instead we should ask: What is the evidence for the claims you wish me to accept as valid? You want me to believe an evolutionary account of humanity’s origin? Fine, lay out the evidence for natural selection, grapple with the objections rooted in irreducible complexity, indicate the clues that point to now-invisible bridges between organisms you claim are linked in an evolutionary ladder.

This can only be a dialogue, of course, because your explication invites (if you are honest and unafraid) responses, to which you respond in turn. Together we consider the evidence, we argue about what it means (an essential part of scientific inquiry), and we come to conclusions that can be upended with the introduction of new evidence.

This question doesn’t seek to close a door prematurely, in other words, and that’s essential because the history of science is replete with self-assurance later upended. It’s replete as well with busybodies haranguing and punishing dissenters. U.S. Congressmen trying to get scientists skeptical of global warming fired from university positions are not pioneers in that regard. Small-minded people who want to bully you into embracing the truth, rather than have a dialogue about the evidence, have always been commonplace.

So BioLogos seeks, it would seem, to spark conversations. Clergy in particular, its spokesmen argue, have an obligation to help their flocks consider these matters. Science, they claim, “is not a threat to religious belief.”

Well, that depends on what beliefs one holds, doesn’t it? There are some Christian sects that teach that God crafted the universe in six days, and that the earth is 7,000 years old. Various methods of dating the earth (which have some interesting anomalies, though pop scientists don’t want you to know that) suggest otherwise. Is science a threat to the beliefs of their adherents? I should say so.

Other sects teach that evolution is incompatible with the Genesis account of man being fashioned in the image and likeness of God. What if one of their followers becomes convinced that the evidence for natural selection is sufficient to render an evolution account reliable? Does that threaten his religious belief? To the core.

My Protestant friends, in particular, must navigate Scylla and Charybdis here—Biblical literalism leads to clashes with fundamental tenets of geological and biological science, while a tradition of personal Biblical interpretation makes it easier for adherents to drift away from basic tenets of Christian dogma. Both represent a threat to orthodoxy, and perhaps this is why opposition to science is strongest, according to survey evidence, among churches with least reliance on catechism, liturgy, and intellectual immersion in theologians who established their sects (if any such exist)—all of these the last vestiges of tradition in Protestantism.

Maybe it’s tempting to blast away with the scientific evidence regardless, but when people hold a faith in their creator that is ill-grounded, we who share that faith have an obligation to treat them gently, as weaker brethren.

This is treacherous territory, because undermining Biblical literalism, absent a steady faith tradition not itself dependent on that literalism, can be akin to jumping from a spacecraft—once you start drifting, you may never regain your footing. Read the comments sections of popular bloggers like Peter Enns and Rachel Held Evans, who specialize in deconstructing Biblical scriptures that undermine their social views, and you see this happening in real-time.

Tinkering with how Christians understand the Bible, then—especially those from sects less reliant on tradition—runs the risk of unraveling their faith altogether, rather than reorienting them to a worldview where science doesn’t threaten that faith. The Corpus Hippocraticum urged physicians to “do good or do no harm.” St. Paul enjoined us to speak truth in love. Both are valuable guides in this discussion, and I hope BioLogos will embody both, because both are greatly needed.

Tony Woodlief lives in North Carolina. His essays have appeared in The Wall Street Journal and The London Times, and his short stories appeared in Image, Ruminate,Saint Katherine Review, and Dappled Things. His website is tonywoodlief.com.

Photo used above credited to Natasha and used under a Creative Commons license.