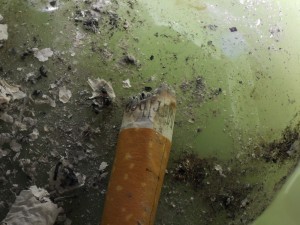 After I’ve peeled the plastic protective layer off the nicotine patch and am holding the flesh-colored circle above the actual, paler flesh of David’s forearm, careful not to touch the sticky medicated part with my fingers, I pause.

He looks at me in the bathroom mirror, lips parted, dark eyes glinting. I think he’s panicking a little, wants to back out, but I’m wrong.

“Let’s put it on the other arm, my left arm,” he says. “Just in case I have a reaction or something goes wrong and I have to have my arm amputated.”

He’s smiling a little, but mostly he’s serious. This is one reason we’re doing this, shedding what is for both of us an almost decade-long habit. David listed it as number one on his “Why I Am Quitting” list, written on notebook paper in his neat script, now posted on the refrigerator:

He’s right. A Grade-A worrywart and fair hypochondriac, every day we continue to smoke is another day for him to imagine tumors sprouting like deadly mushrooms in the damp soil of our bodies.

Not that it’s never on my mind.

A couple of years ago I wrote a poem called “How to Quit Smoking,” before I was actually interested in quitting. But now that I am interested, ready, I’ve returned to it.

1. Light a cigarette. Use a lighter, matches, an iron, or the stove. Draw in. Imagine your breath is wedded to fire.

That is, before you can quit smoking, you have to start smoking.

I never thought I would be a smoker. When I was young—maybe five or six—I hid in a closet and sobbed after seeing my mom light a cigarette in the kitchen of a friend’s house. I’d heard that cigarettes killed, and expected it to happen immediately, for my mom to take a puff and then crumple to the linoleum like a marionette whose strings are cut loose.

8. Remember your first cigarette. It was black, a clove, given to you by the man who would become your husband.

Then in college, I don’t know, I fell in love with a guy who smoked Djarum cloves —the thin black bodies of the cigarettes and the purported fiberglass inside made them seem edgier than my mom’s Marlboro Lights—and the Twin Towers fell and everyone was in mourning and I was reading Berryman and it seemed like the right thing to do.

4. Remember how, after your grandfather died of lung cancer, your grandmother started smoking. Ponder this a long time. Decide it makes a strange kind of sense.

It’s true; that happened. I have lost only one grandparent, and it was to lung cancer. Soon after, I walked into my grandmother’s living room and she was smoking, which I’d never seen her do before.

Did she miss the smell of it, an essential part of her husband’s scent, along with Old Spice and flannel? Did she now harbor a death wish? Was she addicted to second-hand smoke? Or, when my grandfather shed his physical body, did my grandmother inherit this leftover compulsion, a marker of their spiritual connectedness?

As if he set something down, and she bent over and picked it up? That had happened countless times in their marriage, with cups, Pepsi cans, the remote control. Now, a cigarette.

7. Realize how much of your life is measured out in increments equal to how long it takes for a cigarette to burn.

This is the hard part, because the answer is: a lot. David and I listed them—the smokes we were used to, the smokes we will have to learn to live without.

6. Think about Prometheus, and how really you are honoring his bravery and sacrifice. Exhale. Decide, on second thought, you are being melodramatic.

When you quit smoking, you’re not just quitting smoking—that is, the physical act of buying packs of cigarettes, opening them, lighting them, sucking on them until they disappear, tapping off the ash, and disposing of the remainder.

You’re not just weaning your body off nicotine.

You’re not just avoiding your smoker friends and eschewing alcohol.

You’re not just refashioning your schedule, drinking tea, crunching celery or chewing gum to keep that mouth and those newly empty pockets of time occupied.

Seven days in, and we’re doing all of this, but there’s more to it. We’re having to reshape our present, revisit our past, and rededicate ourselves to the future. That can be scary.

We are saying goodbye to breathing in fire, to flame on the inside, to sending our breath out before us in clouds, to seeing it travel into the world. We are giving up something we love. And that can be sad.

10. Flick off the cherry. Then toss away the cold cigarette like you never needed it, no, you never wanted it at all, not ever.

Dyana Herron is a writer and teacher originally from Cleveland, Tennessee, who currently lives in Seattle. She is a graduate of Seattle Pacific University’s MFA Program in Creative Writing.