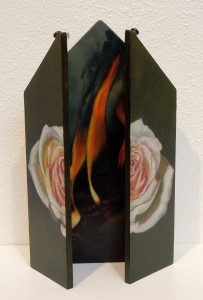 When Weinman completed her fellowship in Europe, she came back to the U.S., where she began a new life that included marriage, the birth of two daughters, and a new chapter in her pilgrim faith.

“I think I’m a Christian, but I don’t know how to do it.” This was how she approached an Episcopal priest in her neighborhood, looking for spiritual direction. Although he was on the point of retirement, he agreed to meet with her once a week, and for the next year, they discussed Christian teachings and the Bible.

During this period, she created “Study for Christ,” a charcoal and conté crayon drawing of a young, muscular man with close-cropped hair. “I drew Jesus as kind of a tough guy, but that was alright, because that’s what I needed in this very uncertain world.”

The drawing marked a turning point in both her art and faith. “By drawing Jesus, I came into relationship with Jesus,” she says, acknowledging that, in many ways, she was no longer the artist who had painted the suffering saints.

“It’s weird to look back at the person I was then, how angry and resentful. I used those images to gain attention but also to illustrate their suffering. The paintings were dark, and I thought that a painting could redeem suffering, and that was noble. But now I began to shed that person.”

As her faith evolved, she reconsidered the power of art. “In the past, I thought it was art that was saving, but now I realized that it was light, the spiritual light, that was saving.”

This new understanding found expression in a visual vocabulary she calls rosefire. The first examples were a series of triptychs designed as altarpieces. On the outside of the panels when the triptych is closed, she painted pink and white roses. On the inside of the panels when the triptych is opened, we see burning branches. “I was trying to represent the many layers of unfolding and unconditional love—I would call it divine love. There are many dimensions to it. Sometimes it’s a light whisper, sometimes deeper and less fleeting. On the outside, it might look like only a rose, but open it and you can see the fire, the passion inside.”

This imagery has been expanded in a new series of rosefire paintings showcased in the Spring 2015 issue of Ruminate magazine. She has, in her words, “combusted the roses” with no separation between rose and fire. “Some people could say that the rose is love and the fire is spirit,” she explains. “That’s two separate abstractions. But to me, this love and the painting itself is an experience, so I put the rose and fire together. Later I was happy to find that this combined imagery was also used by T.S. Eliot at the end of his Four Quartets when he wrote that ‘the fire and the rose are one.’”

Beauty took a beating in twentieth century art, but we’re seeing a comeback of the beautiful in the work of painters like Weinman who acknowledge beauty as a central, even essential, aspect of their art.

“Beauty is love in physical form,” she says. “I’m not interested in illustration anymore, like those paintings I made of the saints. I believe now that art and the beautiful in art can create an experience for the viewer, and that experience can be transformational.”

This view is echoed by critics such as Peter Schjeldahl in his essay “Notes on Beauty”:

An experience of beauty may be intense, leaving a permanent impression, or quite mild and soon all but forgotten. But it always resembles a conversion experience, the mind’s joyful capitulation to a recovered or new belief. The merely attractive (pretty, glamorous) and merely pleasing (lovely, delectable) are not beauty, because they lack the element of belief and the feeling of awe that announces it.

Certainly Weinman has succeeded in avoiding what is merely attractive or pleasing. In the rosefire paintings, she uses darkness as a major part of the painting similar to the way that Japanese and Chinese painters have used the “emptiness” of white space to complete their compositions. At the same time, this darkness points us to the light.

“I feel that the reason we keep certain paintings, calling them masterpieces, is that they enact an archetypal drama, a healing in the viewer,” Weinman says. “So this is why artists need to aim high; this is our gift to others, this healing. That’s my hope.”

Richard Cole is a painter and the author of two books of poetry: The Glass Children and Success Stories. He has also written a memoir, Catholic by Choice, published by Loyola Press.