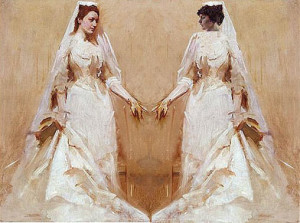 No union is more profound than marriage, for it embodies the highest ideals of love, fidelity, devotion, sacrifice, and family. In forming a marital union, two people become something greater than once they were. As some of the petitioners in these cases demonstrate, marriage embodies a love that may endure even past death. It would misunderstand these men and women to say they disrespect the idea of marriage. Their plea is that they do respect it, respect it so deeply that they seek to find its fulfillment for themselves. Their hope is not to be condemned to live in loneliness, excluded from one of civilization’s oldest institutions. They ask for equal dignity in the eyes of the law. The Constitution grants them that right.

Quite a few commentators have noted the beauty and elegance of this statement’s prose (not a given for Justice Kennedy, who’s been known to drift toward the purple with his pen). Jordan Weissmann, for instance, titled a post for Slate “The Beautiful Closing Paragraph of Justice Kennedy’s Gay Marriage Ruling.”

Weissman wrote, “one of the most beautiful passages you’ll likely read in a court case. I teared up. So did a few other Slate staffers.”

Here’s another post title from Chris Greenberg at Boston.com. “The beautiful ending of the Supreme Court’s gay marriage ruling will make you want to fall in love.”

I doubt that’s ever been said of a Supreme Court ruling, that it makes a person want to fall in love. Something strange, then, seems to have come out of this ruling, something that promotes beauty and love. When the world unexpectedly gives forth expressions of beauty and love in whatever guise, the Christian person ought to take special notice.

It is notable that the fight for gay marriage has had as its most vociferous champion a Catholic (who is also gay) by the name of Andrew Sullivan. This was back in the early 1980s. Here’s how Sullivan remembers those early days:

I remember one of the first TV debates I had on the then-strange question of civil marriage for gay couples. It was Crossfire, as I recall, and Gary Bauer’s response to my rather earnest argument after my TNR cover story on the matter was laughter. “This is the loopiest idea ever to come down the pike,” he joked. “Why are we even discussing it?”

The crux of Sullivan’s argument for gay marriage was not to attack the institution of marriage, but to argue for the importance and dignity of marriage. He was arguing, in short, as a Christian. He was arguing that marriage is a place where God’s injunction that we love one another becomes concrete. Therefore, all human beings who are capable of loving ought to have access to this institution.

Here’s how Sullivan puts it:

But some things you know deep in your heart: that all human beings are made in the image of God; that their loves and lives are equally precious; that the pursuit of happiness promised in the Declaration of Independence has no meaning if it does not include the right to marry the person you love; and has no force if it denies that fundamental human freedom to a portion of its citizens.

To argue, as a Christian, that gay people should be debarred from the institution of marriage is, at its core, to argue that they are less than human. Sullivan’s response to that is the following:

We are not disordered or sick or defective or evil— at least no more than our fellow humans in this vale of tears. We are born into family; we love; we marry; we take care of our children; we die. No civil institution is related to these deep human experiences more than civil marriage and the exclusion of gay people from this institution was a statement of our core inferiority not just as citizens but as human beings.

One of the conservative arguments against marriage has been that the extension of marriage to gays somehow devalues this august institution. Interestingly, Justice Kennedy’s ruling, along the lines of Sullivan’s arguments above, is one of the more traditional defenses of marriage you’re likely to hear.

This signals that something profound has happened. When deep conservatism and radical newness come together in such moving ways, the work of the Spirit is always afoot. When a genial blowhard like Justice Kennedy suddenly pens words that are for the ages, you know there is something greater behind the pen.

I think of the gay kids in the future who, when they figure out they are different, will never know the deep psychic wound my generation—and every one before mine—lived through: the pain of knowing they could never be fully part of their own family, never be fully a citizen of their own country. I think, more acutely, of the decades and centuries of human shame and darkness and waste and terror that defined gay people’s lives for so long. And I think of all those who supported this movement who never lived to see this day, who died in the ashes from which this phoenix of a movement emerged. This momentous achievement is their victory too—for marriage, as Kennedy argued, endures past death.

Morgan Meis is the critic-at-large for The Smart Set. He has a PhD in Philosophy and is a founding member of Flux Factory, an arts collective in New York. He has written for n+1, The Believer, Harper’s Magazine, and The Virginia Quarterly Review. He won the Whiting Award in 2013. Morgan is also an editor at 3 Quarks Daily, and a winner of a Creative Capital | Warhol Foundation Arts Writers grant. A book of Morgan's selected essays can be found here. He can be reached at morganmeis@gmail.com.